Richard Greenberg’s Take Me Out 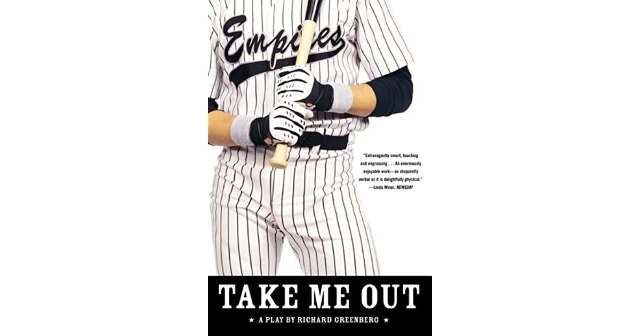 Richard Greenberg’s Take Me Out was originally produced on Broadway in 2003. But the topic is just as relevant today as it was then. Thus, the fine revival now at the Helen Hayes Theater is well worth seeing.

Take a star baseball player who is talented, thoughtful and charismatic and see what happens when he announces that he is gay. What is the effect on his longtime friend? the locker room? What happens later on when a red-neck rookie is called up from the minor leagues? Does this one announcement cause a championship team to struggle?

It is said that the baseball player in the show –was modeled on the Yankee captain, Derek Jeter. (Let’s be totally clear – no one says that Jeter is gay.) It’s just that Darren Lemming has the same type of career (a 5-skills player), leadership ability, biracial background, and is the star of a world championship team.

The play is narrated/commented upon by Lemming’s teammate and close friend, Kippy Sunderstrom played beautifully by Patrick. J. Adams. Kippy is the “intellectual” in the clubhouse, often philosophizing on baseball. His locker is next to Darren’s.

In a series of scenes and monologues that feature Kippy, the enigmatic Japanese pitcher Takeshi Kawabata (Julian Chi), the rookie Shane Mungitt (a fine Michael Oberholtzer), and Darren’s business manager, Mason Marzac the events both before and after the big announcement are told.

In between, we see the banter in the clubhouse – some of which is loudly homophobic as the players slowly adjust to this new dimension.

The first act is mostly light-hearted. We learn why Darren decided to come out at that particular moment, and the initial reactions. He also hires Mason Marzac as his business manager. Marzac, played with great comic timing by Jesse Tyler Ferguson, soon becomes a baseball groupie, overawed by this game he had ignored for so long.

But in act two, the preverbal s*** hits the fan, as Shane Mungitt is called up to pitch for the now struggling team. Mungitt is young, from Arkansas, and talented. He is also an equal opportunity bigot. Plus, he can’t seem to keep his mouth closed.

Scott Ellis has directed a fine cast and production team to create the reality of the locker room, complete with working showers. That should give you an idea that there will be a LOT of total nudity in the play; it is casual and natural. These are athletes before and after the game.

The scenic design by David Rockwell as well as the lighting by Kenneth Posner and the sound by Bray Poor all create the ambiance of the locker room. Rockwell has also designed a fine projection of a Yankee-stadium-like ballpark.

The success of the show is on the shoulders of the cast – particularly those playing Kippy, Mason and Darren. Here, it is a total success. Jesse Williams has the charisma and the looks for a champion athlete, one who could carry a team to victory. But what is even better, he projects both the doubts and the arrogance that a star often has.

Jesse Tyler Ferguson creates Mason as someone who is not only the outsider but feels totally outside in all aspects of his life. He doesn’t make him dumb, just naïve and star-struck like any new fan. Ferguson carries most of the comic weight in the show and he lands the laughs without making Mason a fool. You feel his uncertainties beneath the surface. You like him.

Patrick J. Adams as Kippy is the main narrator of the show. Adams creates a character who balances contradictory elements – he wants to believe that he is Darren’s best friend/confidante in the clubhouse and faces disillusionment when he realized that isn’t so. It is a nuanced performance that touches you.

You don’t have to be a baseball fan – or even a sports fan – to find Take Me Out both interesting and thought-provoking.

It may shock you to realize that in twenty years, we really haven’t come very far in accepting people’s sexuality. Just listen to the debates on trans athletes and others.