For Linde Center for Music and Learning 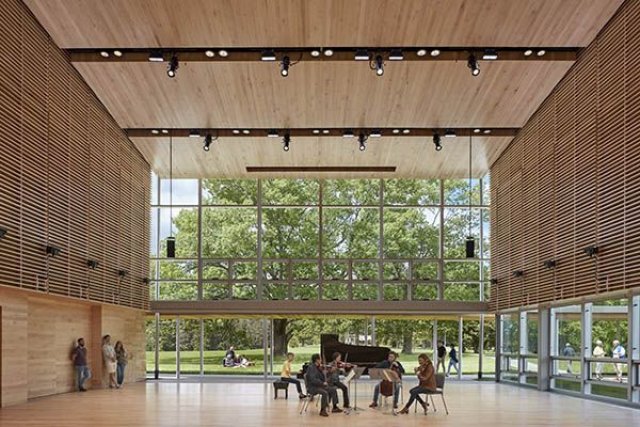 The largest of the Linde Center for Music and Learning's three studios. (photo credit: Robert Benson)

Tanglewood’s Linde Center for Music and Learning received a 2021 Interior Architecture Award from the national American Institute of Architects (AIA) on April 16, 2021. The Linde Center was one of only seven projects nationally to receive this award that "celebrates the most innovative and spectacular interior spaces."

Tanglewood, one of the world’s most acclaimed music festivals and the summer home of the Boston Symphony Orchestra (BSO) since 1937, opened the Linde Center for Music and Learning on June 28, 2019. The Linde Center’s climate-controlled studios with webcasting and broadcast capability provide additional state-of-the-art concert and rehearsal space for the Tanglewood Music Center—the BSO’s acclaimed summer music academy—and plays an essential role in establishing Tanglewood as a multi-season facility, with concert and event rental use by the BSO, Tanglewood Learning Institute (TLI), Berkshire community, and beyond.

With architecture designed by William Rawn Associates Architects, the same firm that gave the cultural world Seiji Ozawa Hall, the new facility acts as a central hub for a new paradigm in cultural programming for the BSO—TLI—expanding the BSO’s reach and influence within the arts world through both traditional and innovative programming and engaging experiences.

Capturing the Intensity and Informality of Tanglewood
The Linde Center embodies the Tanglewood experience, a combination of the intensity of music-making at the highest caliber and the informality of the natural setting. To fit into the scale of Tanglewood, the project comprises four individual buildings connected by a sinuous covered walkway that gather around a 100-foot Red Oak Tree. Each building opens broadly to the landscape, immersing the studios in balanced daylight and framed views of the memorable surroundings. Natural ventilation and sliding glass walls extend the connection between inside and outside.

Music Incubator: Exploring the Future of Classical Music
As a place to experiment with new ideas and technologies around classical music, the Linde Center establishes a more direct personal connection between audience and performer. The buildings create highly participatory experiences, erasing distinctions between "house" and "stage": audiences enter and exit Studio E through a large door from the lobby by walking across the stage itself. During the current health pandemic, the studios have served as sites for streaming performances.

Studio E: Outward Looking, Flexible Venue
As the largest of the three studios, Studio E faces directly out to the Red Oak, through its 50-foot-wide and 30-foot-high window wall framing the landscape as backdrop to the stage. Its retractable seating system with comfortable theater-style seating can be retracted automatically at the push of a button to create a flat floor for experimental performances, full orchestra rehearsals, and banquet events. Variable acoustic elements and special diffusive surfaces are concealed behind wood slat enclosing walls. The room’s acoustics can be tuned to support a wide range of performances from string quartets to the spoken word and amplified music.