Sidelined by the Mainstream Art World 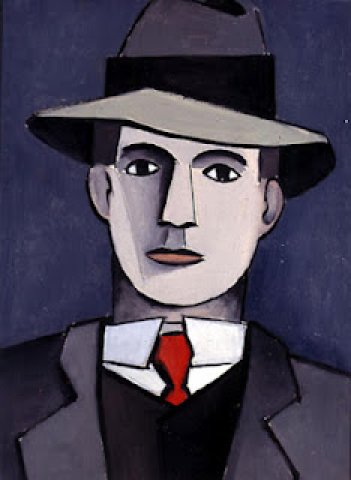 Self portrait by Jean Helion. 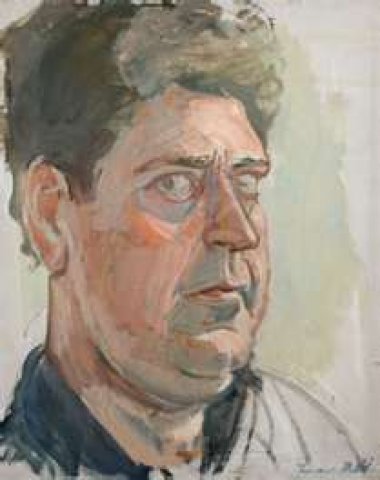 Self portrait by Leland Bell.

In a discussion with Addison Parks about his recent acquisition of a painting by Pegeen Guggenheim, the name of her husband, the French painter, Jean Helion came up. I recalled that he had been the hero of William Bailey who as a young artist made a point of seeking him out in Paris. Addison then remarked that Helion was greatly admired by his teacher at RISD, Leland Bell. Through Helion we were able to piece together a group of American artists that was a subset of the figurative revival of the late 60’s and 70’s that featured more prominently Bailey, Pearlstein, Leslie and Beal. These artists included Leland Bell, Louisa Matthiasdottir, Louis Finkelstein, Gabriel Laderman and Stanley Lewis among others. In fact Bailey, Laderman, Matthisadottir and Bell showed at the Schoelkopf Gallery in New York. It is a world gone by at least in terms of what is being written in the art press, but in the 60’s through the 80’s they had a following among critics and as all of the members of this group were teachers in prominent art programs they shaped the styles of many young artists. Knowing how the art world works they may be due for a revival.

I was included in a show in the late 80’s entitled “Vision and Tradition” curated by the painter Hearne Pardee to whom I had been introduced by the poet Rosanna Warren. It included many of the aforementioned artists and another artist not usually mentioned along with the group Robert deNIro. The show travelled from Colby College to the Morris Museum in Morristown NJ in 1987. In 1991 I participated in a show with the same group less deNIro at the Art Institute of Boston but with the addition of Bernie Chaet, who stylistically belongs to the group but up until that point had not shown with them. Janet Cavallero who was a student of Louis Finkelstein at Queens College curated it.

The title of the Colby College -Morris Museum show sums up the ambitions of these artists. Their work was optically based deriving its language from the progenitors of abstraction such as Cezanne, Matisse, Bonnard and Derain. These founders of abstraction never made the leap to pure abstraction but hovered in a world of direct observation of the things of this world with sensitivity to the underlying perceptual structure of seeing.  Derain, unlike Matisse who pushed his work to the edge of pure abstraction, returned to a chiaroscuro based realism in the latter part of his career. He seemed to embody best the notion of vision and tradition.

Pedagogically that penumbral world is very fecund. It respects the role of visual cognition in the work of the Impressionists and Postimpressionists, yet avoids turning it into a cold sort of scientific methodology, which eschews the naïve acceptance of the world we live in. As a teacher with this approach you can still use the still life setups and live models of the academic tradition as vehicles to move out of the 19th c into the color notions of 20thc. A Midwestern artist Wilbur Niewald who taught at the Kansas City Art Institute was tangentially part of this group. He influenced several generations of artists with his theories on teaching with a primary color palette, and although not his student I would include his one time colleague Stanley Lewis as a protégé. The Studio School in New York where Stanley now teaches is still a haven for those sympathetic to the tenets of this optically based approach to painting.

It is interesting to note that unlike the “Vision and Tradition” artists, the prominent realists of the time never worked in a style that could be taught.  Who are the followers of Bailey or Pearlstein? They were both idiosyncratic and their enduring commercial popularity has something to do with their inimitability. Their techniques are more like barriers set up to hide their emotions. Pearlstein said as much in a catalogue for a show at Betty Cunningham where he was tellingly matched with Al Held.

But the painterly figurative painters (the best I can do with a label, though vision and tradition might work) had lots of ideas. Visually the Postimpressionists and the Fauves gave them a methodology for painting, and the direct observation of the lived world gave them an association with Existentialists who feel we know the world not through analysis but through the haptic subliminal notion of the self in it. Unlike Pearlstein and particularly Bailey who seem hermetic they are open to describing the world in which they move no matter how prosaic and banal. In contrast to Bailey’s hermeticism they are hermeneutic, in other words, engaged in a dialogue with the past and the things of this world at the same time.

Addison Parks describes Bell’s teaching style as pugnacious and his message as “Hoffmanesque”. There was a lot of talk of the energy of mark making and the power of color to create space. In that sense it is a hermeneutic similar to Abstract Expressionism that grew out of an encounter with Picasso, Matisse and Kandinsky. But their attempt to engage the past without any “anxiety of influence”(to borrow the title of Harold Blooms canonic book) so obvious in deKooning, Pollock and Rothko’s efforts to forge a new style is strange and in the case of Bell his work is a wholesale imitation of Helion.

That artists should worship at the altar of a certain style is no sin and the codifying of the late 19th and early 20thc project of the Postimpressionists and Fauves into a teaching method preserved ideas and techniques about paint that leap frogged over the ever recycled deconstructionist ideologies to a new generation who might not have been exposed to it otherwise. In sum, it is about the love of paint and color and its musicality that had always been part of Western painting. Imagine (no need to imagine just look around you) a world without the pleasure of pure sound and harmony and you can see why these artists wanted to spread the good word of pure color.