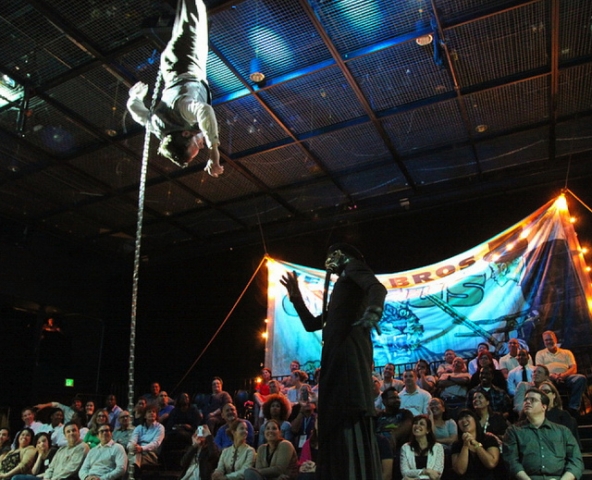 It’s not every day that famed magician and escape artist Harry Houdini flings playing cards at you, interacts with you and even calls you up as a volunteer to participate in one of his tricks. Then again, it’s not every day that we witness a play as unique and engrossing as “Death & Harry Houdini.” This combination of enthralling magic, mood-capturing music performed by the actors, daring stunts, suspense and at least a semblance of a story has returned to the Adrienne Arsht Center for the Performing Arts of Miami-Dade County’s Carnival Studio Theater after a sold-out run in 2012.

This co-production with The House Theatre of Chicago is playing on the nearly 200- seat Susan Westfall Playwrights Stage through May 21.

Vivid sound effects and varied, intense lighting contribute to the suspense that will grab your attention, while stage fog reinforces the mystery surrounding Houdini’s character and his death-defying feats.

Tickets may disappear faster than Houdini can make a goldfish vanish and re-appear, as he does in this show, which is part circus, part magic show and part play, all wrapped up in a kind of modern-day Vaudeville piece.

The acts of magic look so natural that it’s impossible to offer even a remote guess as to what the “secrets” are.

But as impressive as the magic is, Houdini has more on his mind in this play, penned and directed by The House Theatre of Chicago Artistic Director Nathan Allen.

The master escapist (March 24, 1874-Oct. 31, 1926) is out to humble death, which stalks him as he performs his dangerous feats. To quote the title of a poem by John Donne, “Death, be not proud,” for Houdini doesn’t fear you. And as boldly played by a fast-talking Dennis Watkins, who invests the character with charisma, confidence and urgency, we come to feel like death’s no match for us, either.

Still, you’ll cringe when Watkins is lowered into the Chinese Water Torture Cell. The concern grips you as his feet are locked in stocks, he’s suspended in mid-air from his ankles with a restraint brace and he’s lowered into a glass tank overflowing with water. To top it all off, the restraint is locked to the top of the cell. Throughout all this, Watkins appears as comfortable as though he were taking his daily shower.

That’s hardly the case for Houdini’s brother, Theo (an overly-protective, uptight Shawn Pfautsch), who worriedly urges Harry not to perform this daring stunt, citing facts that would suggest Houdini won’t survive, much less escape. This conflict between Harry and Theo (Harry will hear none of Theo’s worrying), helps to create tension for the somewhat flimsy plot.

The story also includes a ringmaster (a highly enthusiastic and attention-grabbing Johnny Arena), Harry’s love interest, Bess (a charming and devoted Emjoy Gavino) and a touching scene in which Harry demonstrates his intense love for his mother, Cecilia (a confused-looking Markia Mashburn, who makes her character seem frustrated at her inability to speak or understand English.)

Cecilia’s death drives Harry to want to defeat death, who appears in human form in the person of actor Tommy Rapley, clad in dark clothes and mask, making motions with his arms, as though casting a spell.

Rapley may look creepy, but as we’re reminded  death is not the end of life – it’s the absence of it, and magicians know they can make something absent re-appear. Hence, we should be less fearful of it.

As an audience member, you’ll need to overcome stage fright; there’s a good chance Watkins will point at you and ask you a question, or call you up to, for instance, check to ensure there are no problems with restraints.

Thanks to Watkins’ vivid portrayal, we get a sense of Houdini’s motivation to perform such daring acts and the type of person he might have been.

Overall, this is an all-around strong production. There are times when actors speak over sound effects or music, making it hard for us to hear them. But the breathtaking magic, performed seemingly so effortlessly as well as the energy and acting skills of this House Theatre of Chicago company, more than make up for the shortcomings.