Buddy Holly on Stage in Chicago

February 3 the Day the Music Died 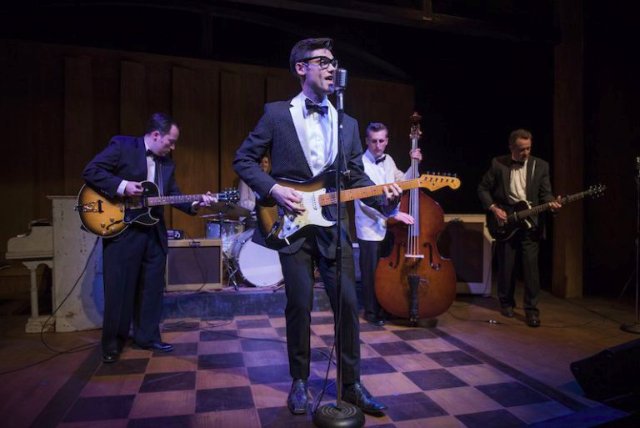 At the Surf Ballroom: Mahler, Stevenson, Whitley and Hasenstab. Photo by Michael Brosilow.

As a diehard rock ‘n’ roll fan, I’ve always thought that February 3 should be a national holiday—the day of the plane crash that killed Buddy Holly at the age of 22.  In fact, one of the first articles I wrote for Third Coast Review after we launched in 2016 was this homage to Buddy Holly.

Something about knowing how the story ends (and this is hardly a spoiler 59 years later) meant I watched the full-on rock ‘n’ roll masterpiece at American Blues Theater with a sense of dread. Somehow I wanted playwright Alan Janes to make it a happy ending. But since the playbill list of the play’s settings includes Clear Lake, Iowa, that was not to be.

Lili-Anne Brown’s direction of this revival of Buddy: The Buddy Holly Story is well-paced and she has a superb cast of musician/actors to work with. At various times, all 16 of them are on stage performing at the same time. Janes’ script is a model combination of story and music, allowing for plenty of renditions of famous rock songs of the 1950s while the story builds to its tragic conclusion.

The music begins in Lubbock, Texas, where Buddy Holly (a spectacular performance by Zachary Stevenson) and his musician friends are pursuing their passion for rock ‘n’ roll music, rather than the local favorite country and western. The problem is that rock is considered “race music” and not a form to be played by white musicians or enjoyed by white fans. Record producers soon found out how wrong they were about that idea.

The boys go to Clovis, NM, to record with music producer Norman Petty (Derek Hasenstab), who gets them a contract with Brunswick. Their first release, “That’ll Be the Day,” is followed by recordings of “Peggy Sue,” which hits #3 on the Billboard pop chart, plus “Oh Boy” and “Everyday.” “Not Fade Away,” another great Buddy Holly song, is also on the play’s setlist.

Buddy Holly and the Crickets are off to a fast start. The play shows their successful gig at the Apollo Theatre in New York in 1957. The Apollo producers are shocked when the band arrives; they’re expecting a band of black musicians because of their sound. That’s followed by appearances on “American Bandstand” and “The Ed Sullivan Show.” In early 1958, Buddy Holly and the Crickets tour the U.S., U.K. and Australia.

On a visit to New York in August 1958, Buddy meets Maria Elena (Molly Hernàndez) and proposes to her on their first date. They’re married within days. Because Buddy has broken up with the Crickets, he needs to generate some income and agrees to headline the Winter Dance Party tour along with Ritchie Valens (Cisco Lopez), J.P Richardson (Vasily Deris as the Big Bopper) and Dion and the Belmonts.

And on a bitterly cold and snowy February 2, they play at the Surf Ballroom in Clear Lake, Iowa.

As they say, that’s all she wrote.

Zachary Stevenson as Buddy is a multitalented singer, guitarist and actor who has performed the Buddy Holly story and many other pop music productions like Ring of Fire and Million Dollar Quartet all over the U.S. and his native Canada. He also has been in 10 productions of Buddy. Not surprising then, he becomes Buddy on stage, with all the Buddy dance moves and hiccupy vocal style. In the finale rendition of Chuck Berry’s “Johnny B Goode,” Buddy dashes on stage playing his guitar behind his head.

The other Crickets are also fearsome musicians. Shaun Whitley as Joe plays upright bass (and also climbs it in the finale). Kieran McCabe as Jerry is a fierce drummer. And Tommy (Michael Mahler), who joins the band later, is a sterling rhythm guitarist as well as the production’s music director.

Rick Sims’ sound design is superb. Instrumentation is balanced and vocals are clear. (That isn’t always a given. I’ve suffered through plenty of concerts and musicals with muddy sound and muffled lyrics.)

Playwright Janes is an English writer and producer who works in TV, film, radio and stage. Buddy—The Buddy Holly   his best-known work and ran for 14 years in London’s West End and toured in the U.K. for 17 years. Buddy has also been on Broadway, toured the U.S., Germany, Australia and New Zealand.

Buddy by American Blues Theater continues at Stage 773, 1225 W. Belmont, through May 26 with performances Thursday-Sunday. Tickets are $19-49.