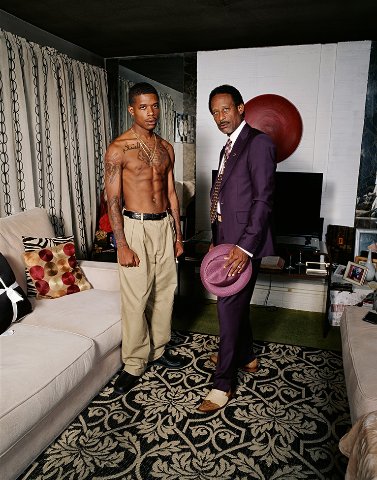 From May 7–October 11, 2021, an exhibition of new and recent works by artist Deana Lawson, winner of the Hugo Boss Prize 2020, will be on view at the Solomon R. Guggenheim Museum. Lawson’s presentation will include large-scale photographs and holograms. In addition, the museum is producing a film exploring Lawson’s practice that will be released in the early fall. Selected by a jury of international critics and curators, Lawson is the thirteenth artist to receive the biennial prize, which was established in 1996 to recognize significant achievement in contemporary art. Since the inception of the award, the associated solo exhibitions have offered an open platform for artists to present projects that realize their current creative thinking, and have formed an anchor of the Guggenheim’s contemporary program.

Lawson’s images are rooted in a moment from the tangible world, but ultimately exist in the shimmering in-between space of dreams, memories, and spiritual communion, where the everyday is transfigured into the uncanny and the magnificent. Her photographs and films usually result from collaborations with strangers whom the artist encounters by chance or deliberately seeks out. These individuals are often depicted within richly textured domestic settings in which the details of decor, lighting, and pose are precisely choreographed. In this way, Lawson draws on the legacies of historical portraiture, documentary photography, and the family album, but transcends these traditions, constructing scenes that merge lived experience with imagined narratives.

The aesthetics and intergenerational connectivity of the Black diaspora guide Lawson’s choice of subject matter. The regenerative forces of nature and the cycle of human life from birth to death are abiding themes, with each of her works taking its place in an overarching project that coheres into what she terms “an ever-expanding mythological extended family.” Close examination of her compositions reveals the presence of portals, adornments, and devotional objects that evoke the proximity of an unseen realm. This sense of the celestial is heightened by images of sublime natural phenomena such as galaxies and waterfalls, and in instances where the radiance of an individual seems to burn through the surface of the work itself. Lawson’s works also demonstrate a special attention to the element of light, as both key to the process by which photographs are produced, and a manifestation of the divinity that suffuses her sitters. Recently, Lawson has begun to set her works in mirrored frames that reflect light outward and materialize an exchange between her subjects and the viewer; in her words, they function as “a reflective lining between worlds, that which is ‘seen’ in the photograph, and that which ‘sees.’”

In this exhibition, large-scale photographs, some of which are embedded with holograms, are arrayed in a dense constellation that surrounds a spectral rendering of a torus—a three-dimensional shape formed by a circle rotated around a central axis. As such, the installation draws on the thermodynamic concept of centropy, a term that describes how the electrification of matter leads to regeneration and harmonious order. The same impulse of renewal through creative energy is central to Lawson’s vision, in which her subjects are figured as ineffably splendid, occupying a world that they command absolutely.

On the occasion of the prize, the Guggenheim produced videos documenting the finalists’ creative processes. Visit youtube.com to watch and learn.

In September, the Guggenheim will release a short film illuminating Lawson’s artistic practice, which is being created in collaboration with renowned cinematographer Bradford Young and Ummah Chroma Creative Partners.

The exhibition includes works whose production was supported by The Lewis Center for the Arts’ Program in Visual Arts at Princeton University, where Lawson is Professor of Visual Arts.Deana Lawson

The HUGO BOSS Group is one of the leading companies in the upper premium segment of the apparel market that focuses on the development and marketing of premium fashion and accessories for men and women. Since 1995, the company has provided critical support to many Guggenheim programs. In addition to the Hugo Boss Prize, the company has helped make possible retrospectives of the work of Matthew Barney (2003), Georg Baselitz (1995), Ross Bleckner (1995), Francesco Clemente (1999–2000), Ellsworth Kelly (1996–97), Robert Rauschenberg (1997–98), and James Rosenquist (2003–04); the presentation Art in America: Now (2007) in Shanghai; the Felix Gonzalez-Torres (2007) and Ed Ruscha (2005) exhibitions in the U.S. Pavilion of the Venice Biennale; and the exhibition theanyspacewhatever (2008–09) at the Solomon R. Guggenheim Museum, New York. At the 54th Venice Biennale (2011), the fashion and lifestyle group HUGO BOSS was the lead sponsor of the Allora & Calzadilla exhibition in the U.S. Pavilion. For more information about the HUGO BOSS arts program, visit https://group.hugoboss.com/en/sponsorship/arts-sponsorship.