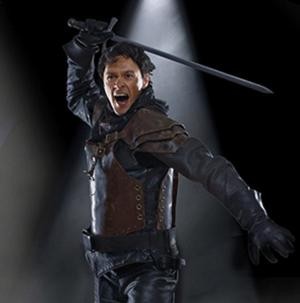 William Shakespeare’s epic Henry V  is directed by celebrated British director Christopher Luscombe in his Chicago debut. In a rousing finale to the 2014 season, the play that inaugurated Chicago Shakespeare Theater in 1986 on the rooftop of Lincoln Park’s Red Lion Pub comes to the Courtyard Theater for the first time. Shakespeare’s powerful history play explores the consequences of war and the capacity of language to inspire and transform. Leading the troops as the charismatic, young monarch is Harry Judge in the titular role. Henry V will be performed in CST’s Courtyard Theater through June 15, 2014.

To unite a divided kingdom, England’s King Henry decides to enforce his claim to the French throne. Confronted by the ferocity of war on the fields of Agincourt, this charming, freshly crowned monarch must prove his worth as a man and king in the ultimate test of his leadership. Chicago Shakespeare’s production will envelop audience members in both the private intrigue of the court and the heroic intensity of the battlefield.

“This play is such a thrilling example of Shakespeare’s rhetoric and wit. It feels to me just like a banquet—an incredible feast—of language,” Director Christopher Luscombe describes. “We have assembled a company of actors with a fantastic sense for this language. To allow this quality to shine through, I have envisioned a dynamic ensemble with actors playing multiple roles in the spirit of the Elizabethan stage.”

Luscombe began his career as an actor, spending seven years at the Royal Shakespeare Company (RSC) and going on to perform at England’s National Theatre and on the West End. His directing career has spanned everything from Shakespearean classics to tongue-and-cheek musicals. As a part of the RSC’s upcoming season, Luscombe will direct one acting company in an unprecedented pairing of Love’s Labour’s Lost and Love’s Labour’s Won (known as Much Ado About Nothing). This matching pair of comedies will kick off the Theatre’s upcoming season with performances in repertory from September 2014 to March 2015. His directing credits also include The Comedy of Errors and The Merry Wives of Windsor for Shakespeare’s Globe, The Madness of George III and Spamalot in the West End, and numerous international touring and West End productions of The Rocky Horror Picture Show. Luscombe’s productions have received two prestigious Olivier Award nominations.

The title role of Henry will be performed by Harry Judge. Judge previously appeared at CST as the Dauphin in Shaw Festival’s touring production of Saint Joan, which was part of CST’s World’s Stage series. Hailing from Canada, Judge performs regularly on Toronto stages and with the Shaw Festival, where his credits include The Kiltartan Comedies, The Heiress and Design for Living. Laura Rook will perform the role of the French princess Katherine, who must overcome politics and a language barrier to make herself heard. At Chicago Shakespeare, Rook has been seen as Juliet in Short Shakespeare! Romeo and Juliet. Additional Chicago productions include The Liar at Writers Theatre and Skylight at Court Theatre.

Kevin Gudahl will play the Duke of Exeter, Henry’s uncle and trusted advisor. Greg Vinkler will appear as Henry’s adversary, the King of France, as well as the role of Pistol. Gudahl and Vinkler have collectively performed in over sixty CST productions and were last seen in this season’s The Merry Wives of Windsor, directed by Barbara Gaines. In her CST debut, Sally Wingert will perform the roles of Mistress Quickly and Alice. Wingert has appeared in more than eighty productions at the Guthrie Theater, as well as the Broadway and West End productions of La Bête.

For a complete listing and bios of the company and creative team, visit www.chicagoshakes.com/henryv.

Chicago Shakespeare Theater’s Henry V runs April 29 through â€‹June 15, 2014 in CST’s Courtyard Theater. Tickets are on sale now for $48–$78 with special discounts available for groups of 10 or more, as well as CST for $20 tickets available for patrons under 35. All patrons receive a 40% discount on guaranteed parking in Navy Pier garages. For more information or to purchase tickets or a season subscription, contact Chicago Shakespeare Theater’s Box Office at 312.595.5600 or visit the Theater’s website at www.chicagoshakes.com

Chicago Shakespeare Theater (CST) believes that Shakespeare speaks to everyone. A global theatrical force, CST is known for vibrant productions that reflect Shakespeare’s genius for storytelling, language and empathy for the human condition. CST has evolved into a dynamic company, producing award-winning plays at their home on Navy Pier, throughout Chicago’s schools and neighborhoods, and on stages around the world. Chicago Shakespeare serves as a partner in literacy to Chicago Public Schools, working alongside English teachers to help struggling readers connect with Shakespeare in the classroom, and bringing his text to life on stage for 40,000 students every year. And each summer, 17,000 families and audience members of all ages welcome the free Chicago Shakespeare in the Parks into their neighborhoods across the far north, west and south sides of the city. Reflecting the global city of their Chicago home, CST is the leading producer of international work in Chicago and has toured their own plays abroad to Africa, Asia, Australia and Europe.

The Theater’s tradition of excellence and civic leadership has been honored with numerous national and international awards, including the Regional Theater Tony Award®, three Laurence Olivier Awards, and seventy-seven total Joseph Jefferson Awards. CST was the 2012 recipient of the Folger Shakespeare Library’s national Shakespeare Steward Award for innovative teaching of Shakespeare in American classrooms. Among its many international engagements, CST participated in the Royal Shakespeare Company’s 2006 Complete Works Festival and was selected to represent North America at the Globe to Globe festival as part of London’s 2012 Cultural Olympiad.