Guare's The House of Blue Leaves 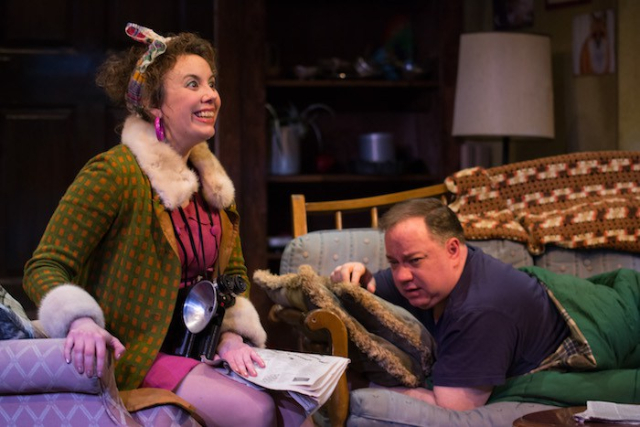 It was an historic day in 1965 when the Pope came to New York. Artie Shaughnessy (Jon Steinhagen), a zookeeper at the Bronx Zoo, really wants to be a singer-songwriter and knocks out a tune for the Pope. He has visions of going to Hollywood to see his old friend, Billy (Noah Simon), a successful movie producer.

Artie’s ditty is just the tip of the absurdity iceberg of John Guare’s 1971 play, The House of Blue Leaves, now on stage at the Raven Theatre. Set in Artie’s Queens apartment on the day the Pope arrives, the circle of friends and family surrounding Artie immerses him in a series of ever more ridiculous events. Joann Montemurro’s skillful direction manages to keep the action credible, the accents believable, and the doom unpredictable.

It was the first visit of a Pope to the US. Pope Paul VI said mass at Yankee Stadium, met with President Lyndon Johnson, visited St. Patrick’s Cathedral and made a plea for peace at the United Nations. (The US would be at war in Vietnam for eight more years.)

Artie’s wife Bananas (a sweet and mischievous performance by Kelli Strickland) hasn’t worn anything but a nightgown in six months. She’s in a state of depression (or something) and Artie has plans to commit her to a mental hospital (the play’s title is a metaphor for a tree filled with blue birds), so he can run off to Hollywood with Bunny (Sarah Hayes), his inamorata who lives in the apartment below. Bunny has dual attractions: her physical charms and her cooking skills; she withholds the latter treats from Artie until they’re married. Artie adores his son Ronnie (Derek Herman), who’s now in the Army. Artie wants to keep him from being sent to Vietnam. Ronnie plans a dangerous gambit for the day the Pope arrives.

Meanwhile, Billy’s girlfriend and star Corrinna Stroller (Jen Short) arrives at Artie’s place. After greeting everyone (Bunny and Bananas are a little leery of her presence), Corrinna takes out her hearing aids in private, letting us know she won’t be able to hear anything that follows. What follows is another silly thread to the play. Artie’s misery is nearly complete when three nuns beg to be let in through his rooftop window; they missed the Pope and they’re cold. Both Ronnie and Billy arrive too. Adding any more details would involve plot spoilers and there’s plenty of plot to spoil.

The House of Blue Leaves has sweet, poignant and tragic moments, but It’s mostly two-and-a-quarter hours of retro nonsense, reminding us or showing us what the world was like 50 years ago. Montemurro’s cast is generally excellent. Steinhagen, Hayes and Strickland are standouts.