Theatre for a New Audience Presents a Yale Rep Production 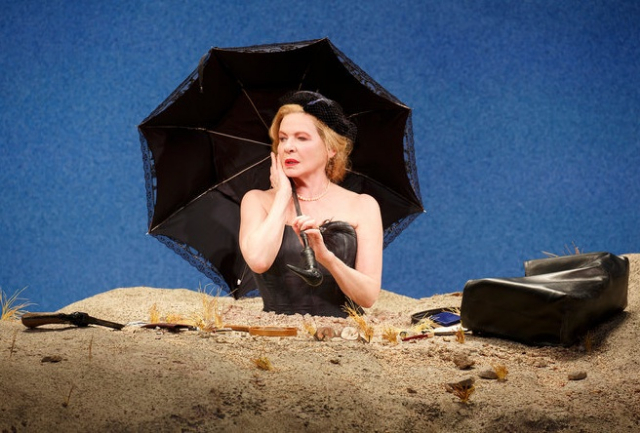 Dianne Wiest with her purse, her umbrella and the revolver 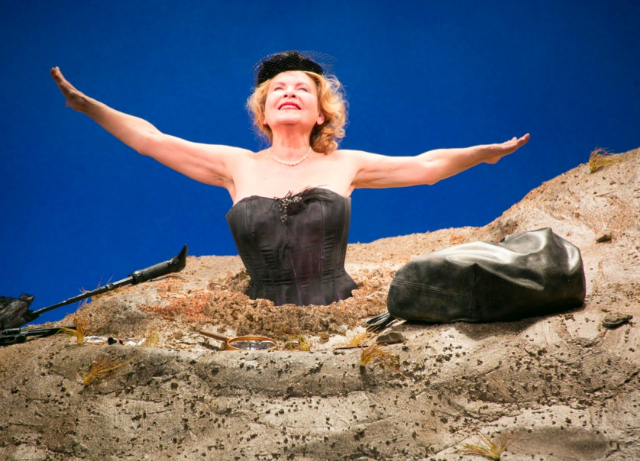 When Winnie still had arms she soared 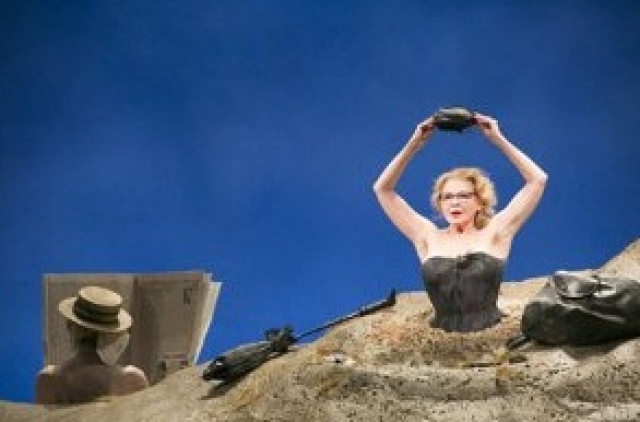 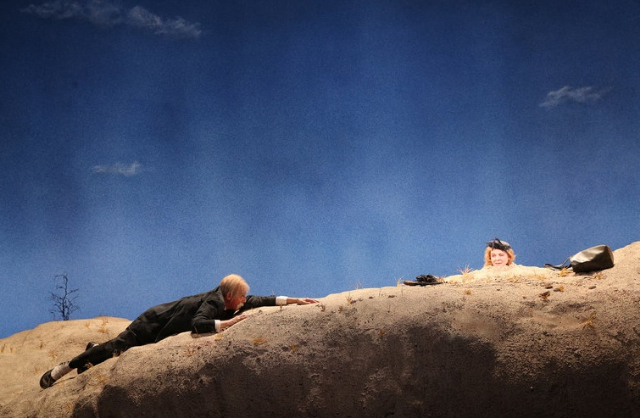 Willie and Winnie in the end

For Americans the phrase "Happy Days" suggests the campaign song of Franklin Delano Roosevelt’s campaign and the difficult but Happy Days that followed his multiple elections. It also heralded the end of prohibition in the US  which was an occasion for joy.

Now urban dictionaries associate 'happy days' with the prospect of a very good roll in bed.  In Samuel Beckett's Happy Days, Winnie remembers these. Willie does too.  But now they are on the brink of a sand dune and Winnie has little left above sand to share.

Beckett’s play is a pull-out-all-the-stops finale to the life of Winnie and Willie, who once wore tux and tails and ball gowns. Now they are stripped almost bare. Only Winnie’s purse, its contents, an umbrella, a handkerchief and a newspaper remain. There is also a gun, which Winnie brandishes from time to time in the first act. It is unclear whether this suggests killing her husband, herself, both or nothing. We are in Beckett's world.

Beckett, ever the musician of words, has writtten a tone poem delivered by Winnie in the cadences of Shakespeare, the Bible and Ireland.

Dianne Weist, taking on the role, intones the song with her voice at first pitched high when she addresses or speaks of her husband, who is over the hill and out of her grasp. She also uses a classic style to perform the beautiful lines of poetry, and to hang on words like 'pure' and 'guaranteed.' Wiest is so magical that the audience is spellbound. There was not a breath to be heard in the theatre, as though we too had been removed from time.

Weist’s face is a marvel of expression, twisting, lifting, engaging us and pulling back. Moments like Molly Bloom’s under the Andalusian Wall from James Joyce fail to bring Willie around, but the audience is certainly eroticized.

The set is familiar, a large sand dune, here sloping stage right. It would be difficult to make a change given Beckett’s direction. There is no sense of passing time in the lighting. Bells chime at the beginning and end of the day. In the first act, we hear only the opening bell. During the second act, the bells ring quite often.We know for whom they chime.

Winnie sinks between the first and second acts.  Willie makes it over the top, but is not able to reach Winnie one last time. We are left of the precipice, prepared for the end which may never come.

This is an extraordinary evening of theatre, in which words alone, the many delivered by Winnie and the few by Willie, stand for themselves. We realize again the power of the word to deliver character and truth, accompanied by great good humor.  This is another event at the Polonsky Center which gives great pleasure.