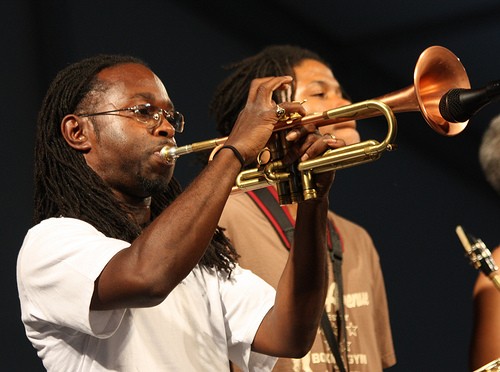 “They just destroyed the audience!  Mario’s band opened the Jazz Tent at 11:00 AM and everyone went nuts for their set,” noted Melnick.  “After the show, I went straight to Mario and said, ‘I’m booking you NOW for a festival I produce in New York next year.’”  And so, Abney is set to perform on both the Main and Gazebo stages on Saturday, June 26.

Once people hear Abney they try to help him along with his career.  Wynton Marsalis donated some money toward Mario getting his first professional trumpet in 2005.  Later, Abney was playing at a hotel where a conference of professional photographers was taking place and photographer/educator Reed Hoffman heard him and gave him a free professional photo shoot.  The shots are stunning.  Now, industry veteran Danny Melnick gives Mario a sweet showcase spot at Saratoga!

Thirty-two year old Mario Abney is currently living in New Orleans since “this is the home of so MUCH amazing music,” he says, but Abney grew up in a Chicago suburb, Harvey, Illinois.  “I grew up with the heavy, heavy church vibe, you know what I mean?  From the time I was 7, I remember going to the South Suburban Missionary Baptist Church with my Mom and later we transferred to Victory Christian Assembly.”

Abney was immersed in music but he wasn’t really serious about it until he reached high school, despite piano lessons as a little kid and learning about drumming from sitting next to the drummer in the front row of church.  His grandmother was into the blues and exposed him to B.B. King and other artists while his mom, a violinist, turned him onto jazz.  His uncle, who was more like a father to him, played piano, trumpet and saxophone.

During high school, Abney was “blown away” by the excitement of the jazz and concert bands at the school, and began to really work on his piano playing and later, French horn and trumpet.  After high school he went on to college at Central State University in Ohio, where his music and trumpet playing truly flourished.

Abney married while in Ohio and had two beautiful children [now aged 2 and 6] but the marriage fell apart, “due to the struggle of being an artist in a society that doesn’t value music as a way to make a living.”  Mario’s main goal of following his spiritual and musical paths didn’t always jive with practicality.  Music was, after all, his first love.

“The music was spiritual for me and my mother had always been behind me, encouraging me to follow this path.  But there is so much opposition to the pursuit of a musical career!  It’s not taken seriously by the outside world.  My mother raised me to be a ‘good man’ and to follow my path and preserve my spiritual thread through my music.  Just two days before she died unexpectedly on Easter Sunday in 2009, she told me ‘You have a gift . . . don’t let anything block you from expressing it.’”

Abney now leads THREE different bands [The Avante Garde, The Abney Effect and The Mario Abney Quintet], plays gigs with other bands and loves to talk about the all-night sessions he’s been having with The Abney Effect at the headquarters of the Mardi Gras Indians Brothers & Sisters Association owned by Ivory Holmes.  The band performing at SPAC, The Mario Abney Quintet [PLUS ONE--and now technically a sextet] will feature some of his best friends and top flight players from his travels:  Kaliq Woods on clarinet; Josh Atkin, alto saxophone; Jessy Morrow on bass; Jason Butler on piano and keyboards and Julian Addison on drums.  Billed the Mario Abney Quintet, their as-yet-released CD is entitled Spiritual Perception.

Mario says that he’d like to succeed in his musical endeavors but that he doesn’t want to be “drawn into the capitalistic game that might change the passion.”  Abney firmly believes that “music uplifts mankind and anything that uplifts mankind is an expression of God.”
MARIO ABNEY PAGE:  http://www.sueauclairpromotions.com/Sue_Auclair_Promotions/Introducing_Mario_Abney_at_SPAC.html

Located in scenic Saratoga Springs, New York, Saratoga Performing Arts Center has been the site of Freihofer’s Saratoga Jazz Festival since it was established in 1978.  Boasting world class jazz talent, an inside seating capacity of 5,200, lawn seating of 20,000 and located just three hours driving time from either Boston or New York City, Freihofer’s Saratoga Jazz Festival draws thousands of jazz lovers from across the Northeast and the United States.

The 33rd Annual Freihofer’s Saratoga Jazz Festival is co-presented by SPAC and Absolutely Live Entertainment, LLC, a festival, tour and concert production company led by industry veteran Danny Melnick.  Melnick has served as the festival’s artistic director and producer since 1999.  Further information on ALE can be found at absolutelylive.net