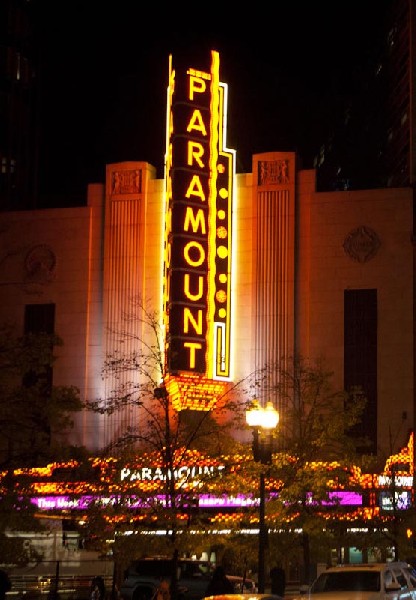 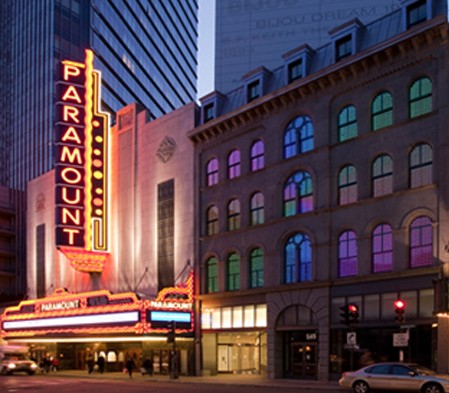 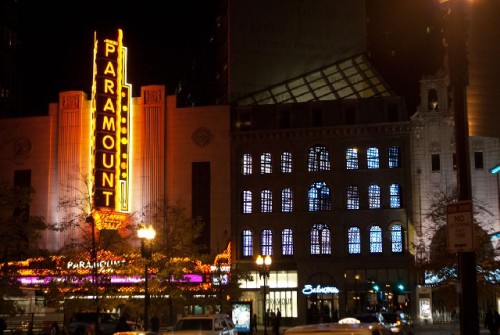 Both Center Building and Arcade Building

As part of the re-imagining of the Paramount Theatre, Emerson College created a three-story high, energy efficient LED installation designed to be viewed through the arched windows of the old Arcade building and seen from the street. Now an integral part of the Paramount Center, the Arcade Building houses the Paramount Mainstage, Bright Family Screening Room and Jackie Liebergott Black Box Theatre.

According to Ketner, “The intention is to activate the visual dynamics of Washington Street and the Theatre District neighborhood with something a little different—a monumental artistic experience.”

Jim Campbell is a new media artist who has successfully integrated science and technology into compelling visual experiences. After receiving his undergraduate degrees in engineering and electronics, he studied film at MIT. This background, in his words, led him “to create interactive video installations that involve the viewer and the viewer's response to a given situation.” "His video of Birds is a contemplative shot of birds landing and flying off in a sequence that switches back and forth from positive to negative, ending in a flurry of flapping wings."

New York-based Bruce Pearson is a painter, who has been creating intensely patterned abstractions for over 30 years. In this video projection, Occupy Space, created in collaboration with Jeff Johnson, they have combined the painter’s sense of dense composition and intense colors into a frenetic display that darts across the windows of the Paramount. Bruce Pearson is represented by Feldman Fine Arts, New York, and has exhibited at the Museum of Modern Art, New York, the Museum of Contemporary Art, Los Angeles, and the Staatsgalerie, Stuttgart. The Rose Art Museum of Brandeis University organized a solo exhibition of his work in 1999.  The Brooklyn Museum, the Museum of Modern Art, and the Whitney Museum of American Art have his work in their collections.

John Powell is a Boston light artist. A graduate of the Center for Advanced Visual Studies at MIT, Powell has been working on light installations and objects for the past 30 years. Powell produced two video shorts for this installation. T8 is a brilliantly colored sphere that descends upon the Paramount and takes off again like an unidentified flying object. Aleph is a folding and unfolding of the first letter in the Hebrew alphabet. Powell has executed lighting projects for Harvard University, the Denver Performing Arts Complex, and for the City of Boston. He serves as a lighting consultant for the City of Boston and is represented by Howard Yezersky Gallery, Boston.

ArtsEmerson is the organization established by Emerson College to program the beautifully restored 590-seat Paramount Mainstage; the versatile, intimate Jackie Liebergott Black Box Theatre (“The Jackie”), which can seat up to 150 people; the state-of-the-art 170-seat Bright Family Screening Room (all located within the new Paramount Center, a cornerstone in the revitalization of downtown Boston); and the beloved, historic 1,186-seat Cutler Majestic Theatre in the heart of the Theatre District, fully restored by Emerson in 2003. Under the leadership of Rob Orchard, ArtsEmerson gives Boston audiences a new level of cultural choice, bringing professional American and international work to its four distinct venues. In addition to its acclaimed theatre works, ArtsEmerson presents adventurous, independent and repertory films on weekends, and offers a diverse music program including cutting edge indie rock and world music. For more information, visit artsemerson.org.

Located in Boston, Massachusetts, opposite the historic Boston Common and in the heart of the city’s Theatre District, Emerson is the only four-year private college in the United States devoted to teaching communication and the arts in a liberal arts context. The College has 3,453 undergraduates and 837 graduate students from across the United States and 50 countries. Supported by state-of-the-art facilities and a renowned faculty, students participate in more than 60 student organizations and performance groups, 14 NCAA teams, student publications, honor societies, television stations including the Emerson Channel, and WERS-FM, the nation’s highest rated student-run radio station. Emerson is internationally known for its study and internship programs in Los Angeles, Washington, D.C., the Netherlands, China, and the Czech Republic. For more information, visit www.emerson.edu.