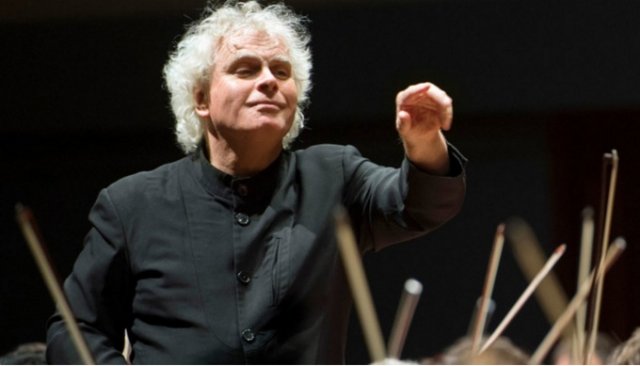 Sir Simon Rattle presented Gustav Mahler, composer and one-time music director of the New York Philharmonic, at David Geffen Hall in Lincoln Center. His last program featured the unfinished 10th Symphony which has not been taken on as often as Franz Schubert’s.  Rattle first recorded the Symphony over three decades ago with the Bournemouth Symphony Orchestra.

A year after Mahler’s death, Arnold Schoenberg noted that both Beethoven and Bruckner died after composing their 9th Symphonies. Did 10 represent tempting fate?

The first and third movements were complete. Alma Mahler, representing her ex-husband, liked performances of the First movement and the Third as stand-alones. Others found the juxtaposition of a mammoth first movement and the four minute Purgatorio which forms the center of the five movement work unsatisfactory.

The English musicologist Deryck Cooke took on the job independently. Alma liked the first recording by Eugene Ormandy and the Philadelphia Orchestra. A year before her death, she told Cooke that he could authorize the performance of the 10th as completed by him anywhere I the world.  Rattle performed his version.

Cooke had not tried to imitate Mahler. Instead he “represents the stage the work had reached when Mahler died in a practical performing version.”

Rattle conducting makes this modest effort sound splendid. While the intricate web of the fastidious composer’s counterpoint and inner voices does not appear in Cooke’s work, the wrenching harmonies of the strings, horns and woodwind solo at play here are Mahleresque. The sheer power and beauty of the music is captured.

The Symphony is bracketed by two vast movements. Inside are scherzos, both energetic and menacing. The four minute Purgatorio forms the heart of the symphony. The secret of Mahler’s world may be held here.

The finale begins slowly with repeated strokes on a muted drum. Some say these echo a New York fireman’s funeral which marched under Mahler’s window.

Rattle took the following allegro at a brisk pace. Phrases from Purgatorio echo. The introduction is heard softly in the violas and brashly on the horns. Folk songs are drawn as a memory. An ecstatic outburst is brief. The work ends in a gentle quiet.

The variety of emotional content in Mahler’s work is reflected by Rattle. Rattle shows a Mahler who is not simply confessional, but a composer possessed of mammoth skills which suggest the complexity of man’s experience.

David Geffen Hall seemed transformed. Were new spot lights in the ceiling casting a soft golden light? Did the hall seem more welcoming?  Or was it just Rattle, The London Symphony and Mahler.