At The Marsh in San Francisco 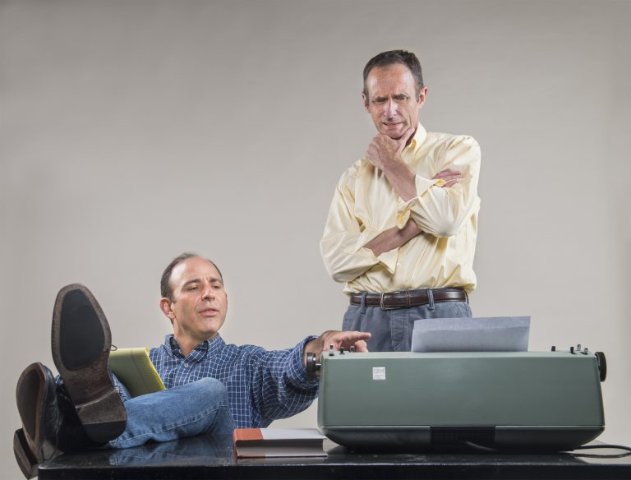 You are excused if the thought of two academics’ joint research stream and their personal relationship as a theatrical outing doesn’t light your fire. But reconsider your bias or you will miss a riveting, world premiere two-hander that never lets up – offering three parts intellectual revelation, two parts humor, and one part sober reflection. After its 70 minute run time, you may develop different perceptions about how people make decisions, and you should enjoy the time spent immensely.

The Marsh San Francisco is noted as the Bay Area’s premiere home for solo theatrical performance. With Two Minds it doubles the cast size and the richness of the drama. The two intellectual giants, Amos Tversky and Daniel Kahneman were Israeli-American psychologists who left a profound imprint in the research areas of information processing and decision making.

Popular non-fiction author Michael Lewis explored the appeal of these two brilliant scientists in his 2016 book The Undoing Project: A Friendship That Changed Our Minds. Now, playwright Lynne Kaufman has distilled the essence of the fire and ice of the two collaborators into an exciting jousting match that gratifies and at the same time leaves the audience wanting more.

For more than two decades starting in the late 1960s, the work and names of the two psychologists were inextricably linked. Ironically, the acme of recognition for both was individual rather than joint, as in each case, one was ineligible for the award that the other received. Tversky was honored with a MacArthur Genius Grant at a time when Kahneman was resident in Canada and therefore couldn’t apply. And Kahneman won the Nobel Prize, which Tversky couldn’t share as he was deceased. Interestingly, the Nobel was for economics, for which the pair had no training, but their findings powerfully impact marketing, management, consumer protection, and other public policy practices.

Apart from their intellects and quests for knowledge, the two could not be much different. Tversky attributed Kahneman’s pessimism and methodological approach to his partner’s evading the Nazis for several years as a young child in WWII France, while attributing his own sangfroid to having been native Israeli during periods of supreme national assertiveness. Kahneman was touchy-feely and saw people as a bundle of emotions and memories, while Tversky saw the world through math and statistics and appreciated people only by what they do. Yet, not only did the two finish each other’s thoughts, but they claimed that the listener often seemed to grasp greater understanding of a message than the one who communicated it.

An early sequence in the play illustrates the erroneous reasoning that people often use and sets the stage for the research partnership. Tversky gives a guest lecture in Kahneman’s class in which he asserts that people are rational processors of information. Afterward, Kahneman informs Tversky of an experiment that he conducted in which one subject group was asked to quickly estimate the result of multiplying 1x2x3x4x5x6x7x8, while another was asked to quickly estimate the result of multiplying 8x7x6x5x4x3x2x1. Although the result of multiplying both sequences is actually the same, subjects estimate that the result of multiplying the sequence starting with 8 is greater than the one starting with 1. People make this mistake because they are wrongly influenced by the primacy of the larger numbers at the beginning of that sequence. This illustration convinced Tversky that Kahneman was onto something about the biases in the way people process information, and so began a deep and fruitful friendship and working partnership, punctuated by major dustups.

These intellectual warriors complemented and pushed each other to intellectual heights. They studied decision processes of risking something that you own against something that you don’t, which is evidenced in the TV program “Who Wants To Be A Millionaire?” They demonstrated the power of reference pricing, the perception that something seems to be a better value when it is compared to something else more expensive. And they showed how people are more inclined to select an option that is presented with its positive rather than its negative aspects, even when the outcomes are the same. For example, if a proposed treatment for a deadly disease is said to save 400 of 600 people rather than lose 200 of 600 people, the former option will gain much greater support, even though the results are identical. And this is but a small sample of the concepts that they explicated.

The artistic team behind the production nails it. Both actors offer great conviction to their roles, with compelling affect. They seem as if they could be the luminaries themselves. Jackson Davis personifies Kahneman’s character with great aplomb – confident, yet cautious, and displaying humanistic emotions. Brian Herndon equals him as a cocky, flamboyant, and self-indulgent Tversky. Together, they celebrate accomplishments with great abandon and clash over all manner of professional and personal issues. Director Robert Kelley keeps the pace and movement one notch below frenetic. He makes great use of the small space with simple but appropriate staging of a blackboard (remember them?) and two desks.

Seldom does entertainment intersect with learning in a manner such as with Two Minds. Either the intense interplay of two dynamic individuals or the psychology lessons are enough to recommend this production, but together they comprise a special treat.

Two Minds is written by Lynne Kaufman and is produced by The Marsh and plays at its main stage at 1062 Valencia St., San Francisco, CA, through June 9, 2018.