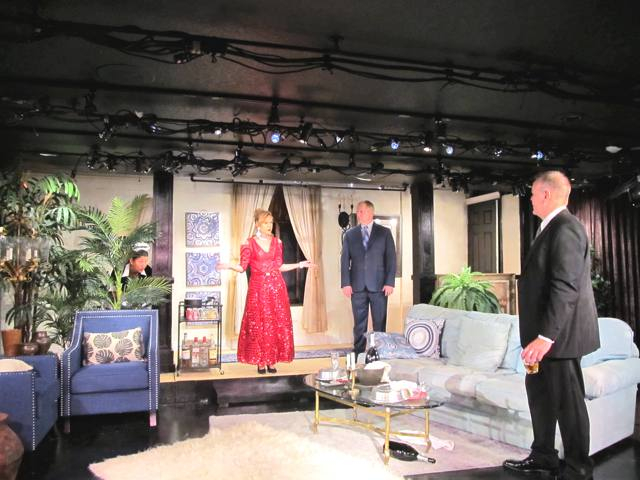 left to right: Melanie Blue as “Estella”, Yo Younger as “Morgan”, Winston Gieseke as “Gage”, and Michael Pacas as “Hilly”.

Plays about Hollywood are easy marks for satire and spoofs due to our human frailty, ambition and a little larceny that resides in all our hearts.  Besides, we’ve all seen every conceivable plot and twist over the last hundred years.  After all, there are only 36 plotlines according to Shakespeare scholars; making everything else merely variations.

The Desert Rose Theatre, of Cathedral City, the only theatrical venue serving the LBGTQ community, is presenting a slick, snappy, and outrageously funny production written by Michael McKeever, that bills itself as a dark comedy spoof/satire entitled “Clark Gable Slept Here”, a Hollywood Fable directed by Resident Director and theatre co-Founder Jim Strait.

The play’s message isn’t in the same league with, say, discovering radium, or presenting a plan to end world hunger.  It’s just about a drug theft gone hilariously awry that involves: The beautiful, self-obsessed, Hollywood actress Morgan Wright (Yo Younger), her ambitious and crass personal manager Hilly Hilliard (Michael Pacas), the General Manager of Hollywood’s famous watering hole and hotel The Chateau Marmont (Winston Gieseke), Estella, a duplicitous, hotel room maid (Melanie Blue), who harbors a secret (every satire and spoof has to have a character who does this), and Travis (John Fryer), who is the object of everyone’s curiosity in this somewhat ‘dark’, noir-like comedy whose play title, like everything in this production, has very little connection to Clark Gable other than a couple of references to him as a Hollywood actor. And that’s the only spoiler alert you’re going get from me. Audiences will simply have to see for themselves in order to get into the spirit of the proceedings.

What I will tell you is, when you attend, leave the kiddies and grandma at home. This funny and well-performed production is strictly an Adult rated play that is in love with f-bombs and all the rest of the words that pass for vernacular discourse on the street these days; along with a little nudity thrown in for good measure.  Actually, the nudity is called for, as it’s an important plot point.

Director Strait has assembled a cast of talented energetic actors who relish their moments of over-the-top performances.  Ms. Younger, as the glamorous Morgan Wright, gives Bonnie Parker and Ma Barker a run for their money as to an Alpha- female who demands compliance to her every wish and command. Pronto!  It’s a role female actors love to portray and Ms. Younger has a ball doing it. Talk about that old TV ad about not fooling around with Mother Nature. Yikes!

Mr. Pacas, as her snide manager, is the type of character that one would love to slap across the head with a two x four, which means he’s nailing his part. The role of the hapless hotel manager Gage Holland, as played by Winston Gieseke, is a study in ‘controlled frustration’ as the only character not involved in the heist/caper, but whose presence is required. It’s a little gem of a performance.

Melanie Blue, as Estella, the hysterical maid caught up in the twist and turns of the plot also delivers a gem of a performance.  John Fryer as Travis, the focus of all the on-stage shenanigans opens the production and remains an integral mystery man.  That’s all that can be said now.  However, remember the great Sherlock Holmes’ admonition:  “Patience Watson, all will be revealed!”

In the creative team led by director Strait, who also designed, the well-appointed, one set hotel suite, is lighted by award-winning designer Phil Murphy, and costumed designed by Allan Jensen, and stage managed by Steve Fisher. The play is produced by theatre co-founder Paul Taylor.

The Desert Rose Theatre, concludes its fifth season with “Clark Gable Slept Here”.  It’s a fun romp and a hoot of a satire and spoof about ‘noir Hollywood’ in the 40’s.  The production is performed without an intermission (approximately 90 minutes) and runs through May 28, 2017.