The Realistic Jonses by Will Eno 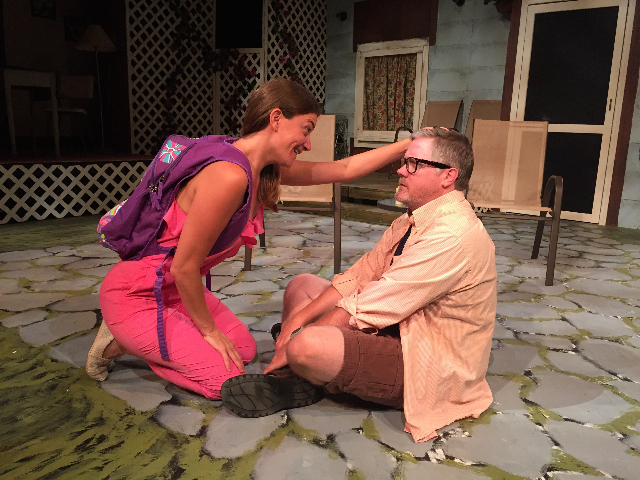 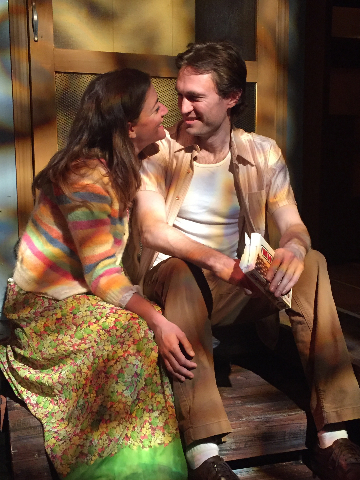 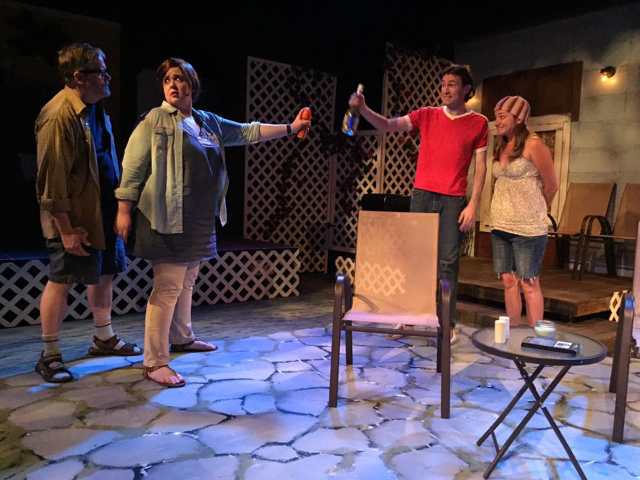 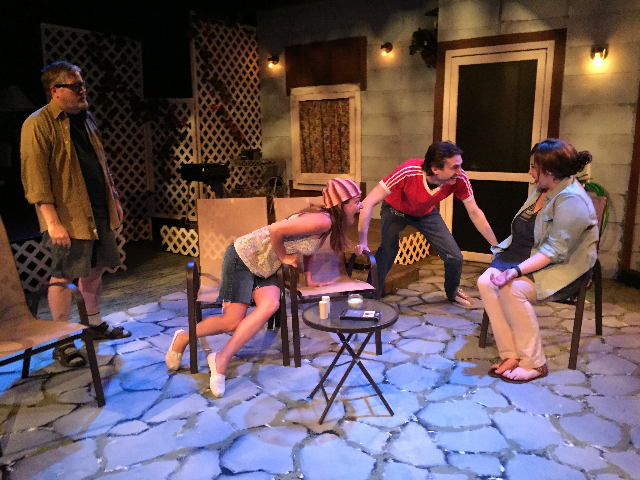 One character offers the others mints at the end of Will Eno’s prize-winning, comic-dramatic play “The Realistic Joneses.”

And with that, the lights go out for the final time.

The candies might offer a tiny sense of comfort to the four characters grappling with life-threatening illness, life’s uncertainties, existential angst, communication problems and fear. But for the time being at least, any comfort is better than none, hence the offer of the flavored sweets.

“The Realistic Joneses” doesn’t have a neat, tidy ending that provides a comfortable resolution for the characters and audience members. But so much of life, as fragile as Laura Wingfield’s glass menagerie in Tennessee Williams’ play, is uncertain. That’s the message Eno seems to leave us with at the end of his multi-prize-winning play.

It’s onstage through May 22 in the 99-seat black box performance space called The Vanguard in a laudable production by Ft. Lauderdale’s Thinking Cap Theatre. The company is “committed to presenting high-quality, thought-provoking theatre to South Florida theatre audiences.” Mission accomplished with Eno’s play; it will not only stir a variety of emotions but make you put your thinking cap on as you ponder some of humanity’s fears and questions.

In the much-lauded play, performed on Broadway in 2014, Eno compassionately captures his characters’ fears, questions about life, their indomitable spirit and the effects of words.

Little happens in Eno’s play, which brings to mind the frustration and despair of Anton Chekhov’s characters, the existential and absurd elements of Samuel Beckett’s plays and Thornton Wilder’s tendency to focus on life’s simple, often-overlooked pleasures and moments to be fully experienced and cherished.

“The Realistic Joneses” is a taut, touching, tender, heartfelt and humorous gem of a play. To witness it is to look into a metaphorical mirror and see yourself, a loved one or dear friend in at least one of the characters. That’s because they’re written so vividly and with familiarity.

Eno, whose work has been likened to the aforementioned playwrights, presents us with two couples who are neighbors. They also happen to share the same last name, but it’s not the only commonality between them. The men, Bob Jones and John Jones, suffer from an ALS-like disease. John’s wife, Pony, is prone to crying fits and low self-esteem. Jennifer, Bob’s wife, is the composed, comforting figure. But that’s not to say she’s immune from losing her cool.

“That’s what feelings are for,” he answers.

The dialogue escalates in heat, reaching a boiling point in which the up-until-now composed Jennifer swears and blows up.

But just a few lines after her outburst, Bob is conveying his fears to her and Jennifer reverts to being her hubby’s rock.

“We all do. What do you want me to do? Come over and muss up your hair?”

Shifts in mood and tone, from fear to comfort, angst to serenity, drama to humor, are part of what endears us to this play. One moment, we’re in deep concern at a character’s near-state of hyperventilation, the next we’re as placid as they are. Such shifts symbolize how life can change without warning -- how we can, for instance, marvel at the enchanting night sky one moment before watching in horror as a friend or loved one experiences a seizure. The intimacy of the playing space provides us with a visceral, vivid experience as we feel drawn into the characters’ world.

While “The Realistic Joneses” deals with such topics as deadly diseases, our mortality and infidelity, playwright Eno spares us from depression. He manages to deal with these disturbing topics while infusing the play with humor. During one scene, for instance, a hysterical Pony panics as though someone’s having a heart attack. It turns out a dead rodent’s in the backyard of one of the couple’s homes.

“Off you go to the great oak tree in the sky,” one of the male characters says, giving voice to the play’s several lines of levity.

As part of a first-rate quartet of actors, Gretchen Porro deftly captures this wild aspect of Pony’s personality. Her Pony leans forward with a wild facial expression, ready to pounce on any comment with unbridled glee or out-of-control anger. Porro imbues Pony with this wild streak without overacting. You wonder how she manages this without hyperventilating. But Porro also invests Pony with a touching vulnerability that conveys her humanity.

“I used to think a hospital was some science fiction thing,” she says at one point, giving voice to the fears many have of such a setting.

At another point, Pony, who creates greeting cards for a living, cries as she laments “I’m not good at anything.” We’re convinced she’s feeling terrible at the moment.

Such Chechkovian moments are balanced with a spirit these characters have of forging on, not giving in to their despair.

Bob Jones, who buys paint for the roads of the unnamed community in which the play’s set, seems like a man doomed to remain a sulking individual. Mark Duncan, whose facial expression conveys a sullen expression, seamlessly transitions into a more upbeat person.

As John, Noah Levine has an easygoing charm in the beginning. But as the play progresses, he vividly captures the character’s pain-filled demeanor. He writhes in pain and simulates a seizure so violently and convincingly you feel like helping him in some way or calling 9-1-1.

You’d best leave that to the calm Jennifer, played by Casey Dressler with a convincing composure in an impressively naturalistic performance.

The action plays out on scenic designer Alyiece Moretto’s realistic rendering of the setting. There’s the exterior of Bob and Jennifer’s home, which looks like it could use a paint job. Meanwhile, separated by a white fence, we see the fresh interior of John and Pony’s home, into which they’ve just moved. It would have been nice, however, to also be able to see the interior of Bob and Jennifer’s home for comparison purposes.

The brightness of the interior of the new neighbors’ home matches Pony’s often lively personality, as does her pink outfit. At other times, the sleeveless blouse Pony wears is a good match for her outlandish behavior. Nicole Stodard designed the costumes, which define character but don’t suggest any particular time period. Perhaps that’s because of the timelessness of the story.

Eric Nelson’s lighting design is particularly effective during an intimate moment, when the lights are toned down. Otherwise, Nelson’s use of colors is somewhat perplexing, as they don’t quite match the mood of scenes.

Margaret Ledford directs with a sensitive touch, her staging is smart and she ensures the appropriate tone is conveyed for each scene. Credit Ledford, also, for helping Porro convey not just Pony’s comic side but her vulnerability.

Part of the appeal of Eno’s play is the variety of emotions it elicits and how sympathetically he’s written “The Realistic Joneses. Eno also doesn’t offer any easy answers. But in the end, you’ll leave the theater feeling you’re not alone in harboring questions about your existence and fears about the fragility of life and the uncertainty surrounding it.