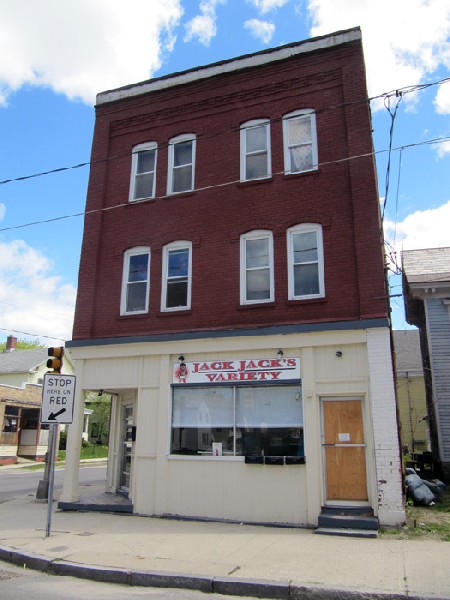 We started with JackJack’s Soul Food in Pittfield at the corner of Francis and Linden Street. 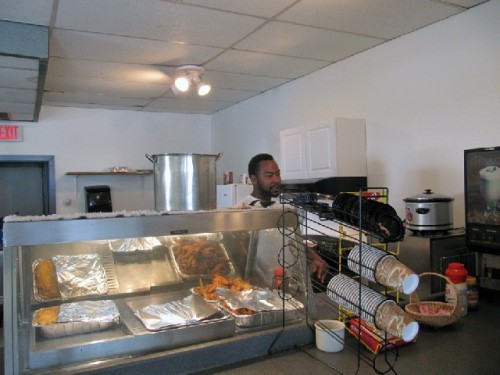 Terrell Ortiz behind the counter at JackJack’s. 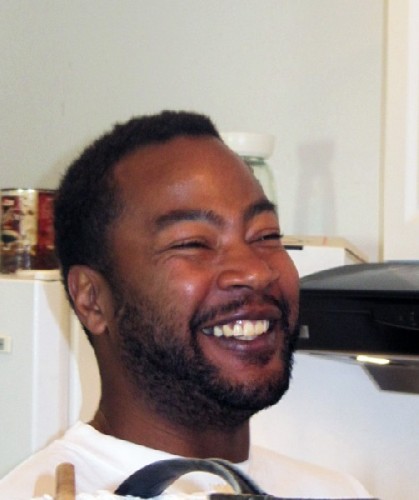 Terrell offer us fried chicken and a sample of gumbo but we decided to return for barbecue. 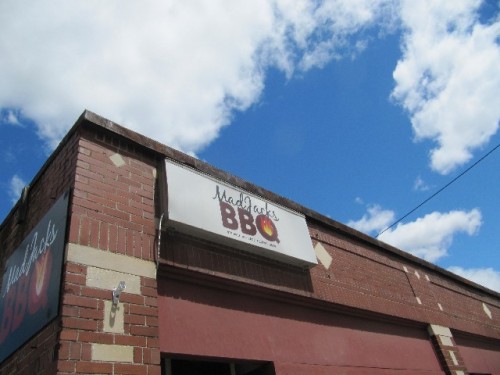 The sky’s the limit at Mad Jack’s BBQ. 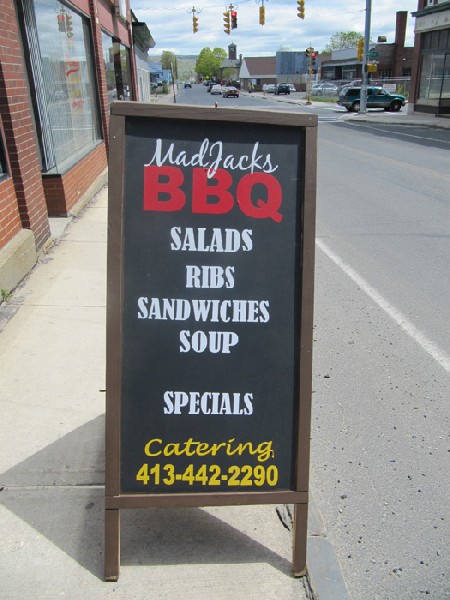 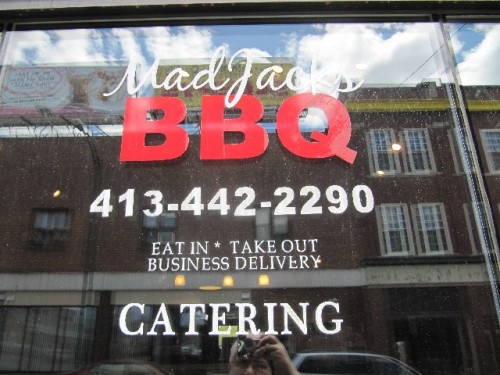 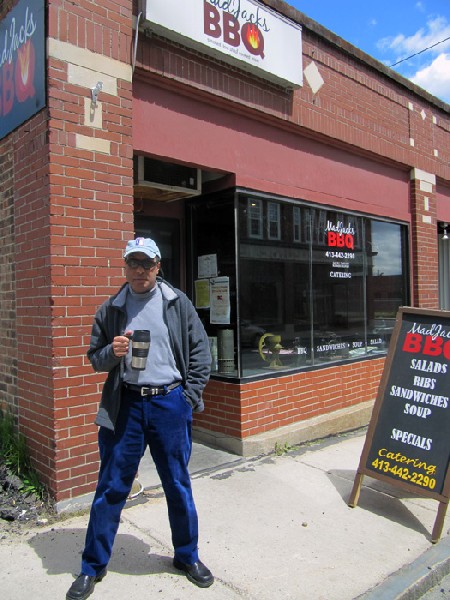 Cisco is ready for some serious barbecue. 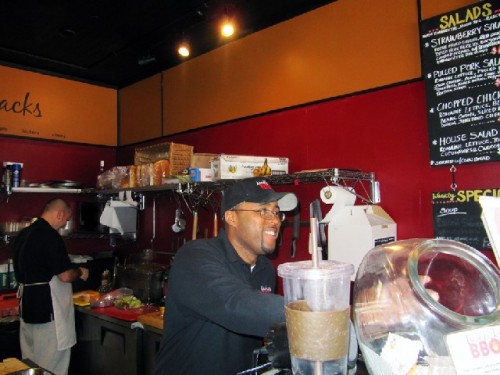 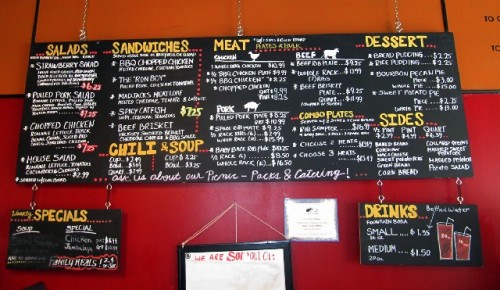 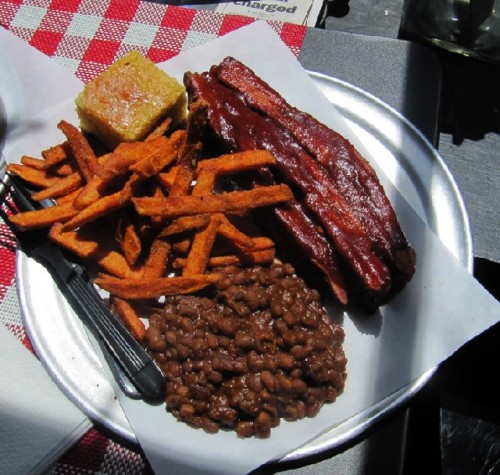 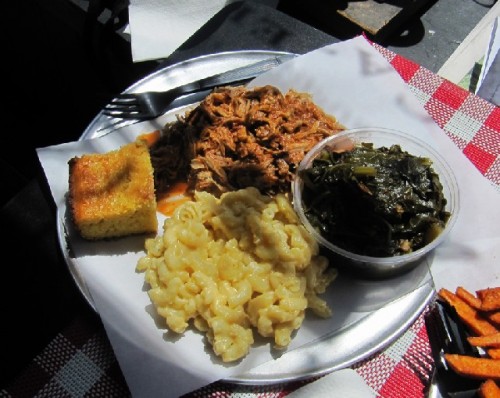 With pulled pork we ordered collard greens as well as mac and cheese. 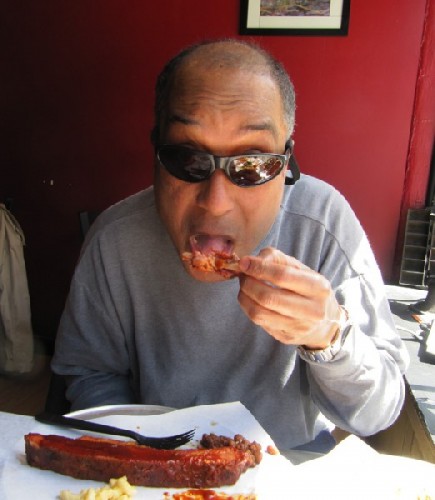 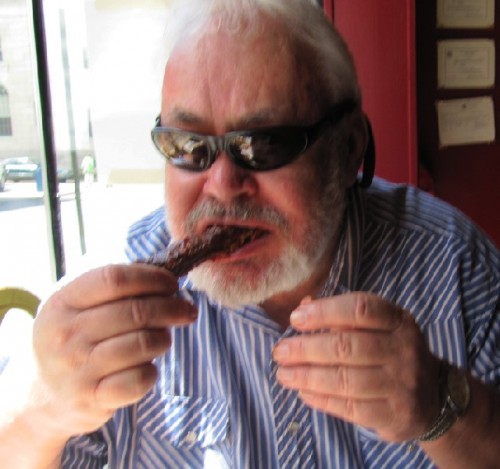 Pancho was in barbecue heaven at least until next time.

As transplants from big cities to the Berkshires a particular sacrifice is the lack of diversity of ethnic food and neighborhood joints.

The restaurant business is tough particularly with the lopsided seasons of boom in the summer and bust in winter. The winter this year was a doozie. Mostly we hunkered down.

From now through the Holidays, however, the Berkshires are just glorious. A veritable Garden of Eden and one of the sweetest regions on earth.

There was an excited dialogue.

While there was an overview the article was short on details and specifics. Even addresses and directions were vague. There was not much discussion of the food itself. But it was a clip and save of destinations for further research.

We decided to see and more importantly taste for ourselves.

This week we launched the Barbecue Project. To seek out, compare and contrast, report in detail on ribs and pulled pork in the Berkshires.

There would be some ground rules. In the tradition of the Phantom Gourmet, the norm for food critics, we would attempt to be anonymous. We introduce ourselves as tourists and barbecue enthusiasts.  Hence our byline, The Pit Bulls, and individual personas as Pancho and Cisco.

We are both very serious about barbecue. For years we have sought it out all over the United States and the Caribbean.

When driving through the South, particularly those former annual adventures of moving Mom from Palm Beach to New England, Pancho often got off the highway with miles down dirt roads. Ending up at somebody’s pit; there to enjoy tender meat and tangy sauce.

As a former producer for CBS Cisco got to travel all over the world with a generous expense account. That included Michelin rated restaurants in Paris and the finest tables on both coasts. Having tasted the food of the famous chefs of the world he agrees with Pancho that there is nothing quite like neighborhood bistros. Particularly the local barbecue pit.

Funky rib joints are everywhere in the South and Mid West with many regional styles  from Memphis dry rub, to Kansas City baby backs, and Texas beef ribs. There are endless debates about the best rigs and combinations of wood or charcoal. The sun never sets on the endless array of sauces from sweet to hot, vinegar or mustard based, tomato and Vidalia onion, honey or brown sugar.

Then there are the sides. Start with corn bread and from there the standards include collard or mustard greens, macaroni and cheese, baked beans, slaw, mashed, fried and potato salad, candied yams. Of course, for dessert, pecan and sweet potato pies.

After lively discussion we decided to start with a neighborhood joint JackJack’s Soul Food in Pittsfield. (228 Francis Avenue at the corner of Linden off North Street. 413 464 9098. Open 10 to 10 Monday through Saturday.)

The Eagle article didn’t include an address and the neighborhood spot is a one man operation with no website or marketing. So it took an effort to track it down with the help of Mapquest. We were thrilled when we found it. The real deal. Neighborhood barbecue.

But we were disappointed when Terrell Ortiz told us that he only has barbecue on Wednesday, Friday and Saturday. We visited on Tuesday when he featured fried chicken and gumbo. On Thursday he serves fish. If you call ahead on barbecue days you can order his specialty Cornish hens.

Having survived winter Terrell is looking forward to his second summer. “When I put the rig outside you can smell the food all through the neighborhood and the line runs round the block. It just flies out of here.”

Is it mostly neighborhood people we asked. “No” he said. “They come from as far away as Great Barrington cause I’ve been written up in the papers a couple of times.”

The space is a former neighborhood variety store. “At first I tried that” he said “But it was the food that kept me going.” He plans soon to add a line of deli meats.

We asked how he got into cooking. From his mother and grandmother. “It’s just something that seemed it would go around here.” Lacking a smoker he cooks the meats, dry rub and wet, for eight to ten hours at the lowest possible oven temperature.

With plans to return another time, and call ahead for hens, we moved on to plan B.

Under chef Jabari L. Powell Madjacks BBQ has been in operation for more than a year. He is the son of a well know Pittsfield chef and professor of culinary arts.

The meats are prepared daily with very little leftover or waste. “If I run out on an item well that’s it” he said. The prep work and rub is applied the night before. “I have it down to a science” Powell told us. “I come in and start the meats at 6:30. Then I return around 10 and we’re open until 7:30.” As is usual in the restaurant business it’s a long day. Powell has an assistant handling a diverse menu that includes chicken, pulled pork, brisket, catfish, beef brisket, pork, baby back and beef ribs. There is also soup and chili as well as a dozen sides. Deserts include bread pudding, rice pudding, bourbon pecan pie and sweet potato pie. The meats are served as plates with sides, sandwiches, or salads.

With so many possibilities we decided to focus on pulled pork and pork ribs. Both plates (pulled pork $8.25) and (spare rib plate $9.25) were generous with corn bread and a choice of two sides. For sides we chose baked beans, sweet potato fries, macaroni and cheese, and collard greens.

The eating was intense, slow and mostly rhapsodic. “We’re on a mission from God” Cisco said with a reference to the Blues Brothers. “This is serious barbecue” he said as we enjoyed and evaluated the meal.

We concluded “The sides are A Plus.” The sweet potato fries were thin, crispy and nicely salted. The collard greens were outstanding with a nice meat flavor and super tender. The baked beans had a delicate flavor. The mac and cheese could have been more creamy and cheesy. The sides are available for take out at half pint, $2.39, pint $4.39, and quart, $6.39.

The ribs were super tender and nicely finished with sauce. The three large, meaty ribs were more than enough. Cisco thought they were really good and rated them B+. Pancho found them overly moist and lacking the traditional, dry, smoky texture.

We asked Powell about the cooking technique. It seems the rubbed raw meat is cooked for four hours. Then removed and wrapped in foil and cooked for several more hours. That means that he “sweats” the ribs. It results in a very tender, falling off the bone rib with a short shelf life. Everything is timed to be served at the peak of perfection.

Cisco found the pulled pork too “porky” and not smoky enough. Pancho commented that it was moist and tender but bland. In this case adding sauce made all the difference. There were several options, all excellent, and we both liked the hot as well as the vinegar based.

It is a cozy restaurant with just a few tables. As we dined there was a steady stream of folks coming by to pick up takeout. During the warm weather Powell reported that he has a nice lunch crowd.

We agreed that we will be back as regular and enthusiastic customers. In future visits we will work our way through the menu. Perhaps the chicken next time. Or the beef ribs.

Following our first excursion there was a lively discussion about our next adventure. It will be a couple of weeks given our busy schedules. But through the coming months we will pursue the quest for the perfect barbecue. Bon appetite.