Significant Other by Joshua Harmon 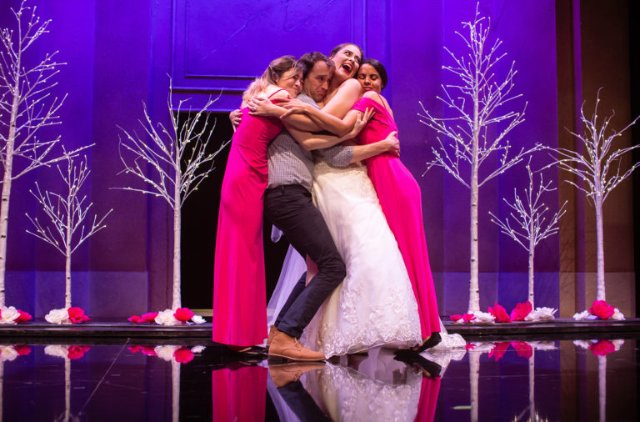 Within the lifetimes of many of us, American society’s social contract has twisted beyond recognition. In mid-20th century, the average age for a first marriage was 23 for men and 21 for women. Today, it exceeds 30 for men and 29 for women, if they marry at all. Indeed, unmarried couples living together; same sex civil unions and marriage; intentionally having children outside of marriage; and strategically staying single have become so accepted that now only half of American adults are in traditional marriages.

The consequences of this sea change abound. The intimate social center of twenty-somethings in the past was built around the married couple with a fast-growing family. The transition to adulthood for the white-collar class was fairly prescribed. Attend an away-from-home university; move onto work elsewhere; and marry and have kids was somewhat standard and seamless. Presently, the social network of that same age group is often comprised of singles and others in non-traditional relationships. Now, those unattached in their late twenties often face a disruptive set of new transitions, as their adult networks disintegrate with late marriage and other changes such as job transfers.

Against this backdrop, we meet Jordan, a late-twenties, single, gay man. But breaking from the norm of the gay guy as a supporting-character sidekick, playwright Joshua Harmon centers the narrative on him in Significant Other. He is sociable, pleasant appearing, and means no harm, but also has strong intimacy yearnings and is neurotic. Because of common interests and comfort levels, Jordan’s three closest friends happen to be single women. But burgeoning romantic relationships of the women threaten his circle.

The first act of Significant Other contains a number of skit-like scenes, largely about relationships of various sorts. Some of the scenes are trite, with hackneyed music, stereotypical characters, or stock situations.  However, each is funny and works individually.  Yet, at intermission, it’s not clear what we should be concerned about. We could just as well be watching Will and Grace on television. Theatrically, the second act is redemptive. Although the humor still flows, subtext is verbalized, the angst meter rises, conflict emerges, and thematic threads intertwine to fully realize the subject matter.

In the end, the play is all about Jordan. And in his reactions to changes around him, Jordan acts as if it’s all about Jordan. In fact, that notion may be the hinge that separates many who will like this play entirely from many who will feel so-so about it. The latter group will feel that his focus on consequences to him rather than to his friends make him unsympathetic. The former will observe that he has maintained close friendships, and though he is self-centered, it’s not without cause. He suffers the predicament of seeing his world change for the worse and lacks the ability to challenge it or a strategy to cope. What’s more, when he finds his girlfriends opting for some traditional practices that he finds at variance with the contemporary ethic, he is unable to reconcile the ambiguities and personalizes some decisions that he feels are adverse to him. If insensitive to the needs of others at critical junctures, Jordan is confused, wounded, and deserves a little slack.  But it is his mentally declining grandmother that provides proverbial wisdom in telling him that the book of life is long, and in time, this chapter will pass.

Playwright Harmon knows his characters and has crafted a script that is both extremely funny and equally provocative. Director Lauren English guides a creative team and performers that all make their contributions effectively. Kyle Cameron inhabits the role of Jordan like it was made for him. He is sensational. The anxiety in his hand-wringing, face-covering, and muttering is palpable. He is particularly amusing in a “do not hit the send button” sequence.  We’ve all been through that apprehension of sending an email that we know will cause conflict and have immediate remorse as soon as it’s sent.

Staging is noteworthy. Stage designer Jacquelyn Scott reveals her background in prop design. Rather than a full set, she employs a brown box with spare, often role-on props to represent each venue, and the strategy works well in creating visual and spatial diversity while maintaining intimacy and keeping the emphasis on the actors.

The very title Significant Other is poignant and of our time. Its abstractness as a term contrasts with the more intimate traditional words it represents. The topic matter is also relevant and the treatment authentic. As much as society has changed in recent decades, the clash between embedded mores and the quest to be different or better in some way will always exist. This play addresses the social contract and offers depth of meaning and enjoyable entertainment at the same time.

Significant Other, written by Joshua Harmon, is produced by San Francisco Playhouse and plays at its stage at 450 Post Street, San Francisco, CA through June 15, 2019.