X: The Life and Times of Malcolm X 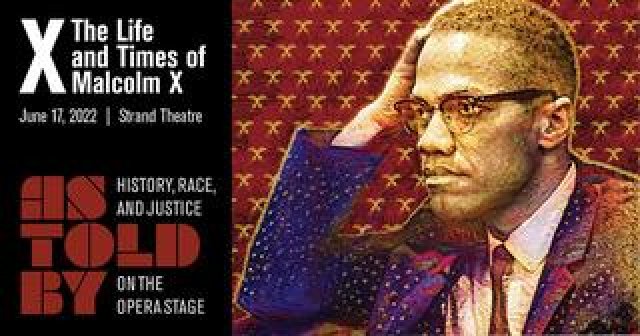 The Boston Modern Orchestra Project (BMOP) and Odyssey Opera, two of today’s leading innovators on the classical musical scene, present the New England premiere of Pulitzer Prize-winning composer Anthony Davis’s seminal opera X: The Life and Times of Malcolm X (1986) on June 17, 2022, at the Strand Theatre, a short distance from the house where Malcolm Little lived in his teenage years in Roxbury. This sprawling, genre-bending biographical opera unfolds the astonishing life of one of the most misunderstood men in history.

According to Gil Rose, Founder and Artistic Director of both BMOP and Odyssey Opera, “It’s a thrill to present X, undoubtedly one of the great American operas of the 20th century. There is no better way to celebrate contemporary Black creativity in Boston and nationally than with the resurrection of a forgotten work composed, written, and performed by Black artists about Black activist and legend Malcolm X, just blocks away from his home.”

Similarly, composer Anthony Davis, winner of the 2020 Pulitzer Prize for Music for The Central Park Five, agrees that there is no better time than now—and notes recently completed revisions to X reflect his updated views on the opera. “Malcolm X (El Hajj Malik el Shabazz) is an even more relevant figure today,” says Davis. “It has been 35 years since the premiere of X. Malcom X’s vision is as prescient today as it was in 1986. He is an inspiration for Black Lives Matter and the movement for social justice. As a composer, I am thrilled to help create X as an opera for today that speaks to the future as well as the past.”

Described by The New York Times as “a riveting and uncompromising work,” X pairs Davis’s distinctive score with a libretto by Thulani Davis to depict the galvanic life and career of Malcolm X (1925-1965) in a series of fast-moving vignettes. After the opera’s 1986 premiere, The New Yorker declared, “the work is gripping, and it is unlike any other opera.... X is a work that deserves to enter the American repertory...not just a stirring and well-fashioned opera but one whose music adds a new, individual voice to those previously heard in our opera houses.”

Sadly, the original recording of Davis’ masterwork is no longer in print. BMOP and Odyssey Opera will record X at the Strand Theater during the weekend of June 18-19 for a world premiere recording of the revised edition to be released on BMOP/sound.

In partnership with Castle of Our Skins, a Boston-based, Black-led chamber music ensemble, the X production also includes an educational program designed to continue conversations about Malcolm X. This past spring, Boston Arts Academy students learned about the history and legacy of Malcolm X while creating works to commemorate his life and impact in anticipation of the opera’s New England premiere. Students’ projects (video works, visual art, dance performances) will be presented in the lobby at the Strand Theatre before, during and after the concert. More details about this free, public Malcolm X exhibit, along with other programming exploring the history and legacy of Malcolm X, will be announced soon.

About As Told By

In 2021, BMOP unveiled a new five-year initiative to elevate opera by Black composers. From 2022-2026, As Told By: History, Race, and Justice on the Opera Stage features neglected repertoire, current masterpieces, and new operas by Black American composers that depict vital figures of Black liberation and Black thought across 250 years of history. Supported in part by a grant from The Andrew W. Mellon Foundation, As Told By includes New England and world premiere performances of five operas in partnership with Odyssey Opera, along with commercial recordings to be released on BMOP’s Grammy Award-winning label BMOP/sound and complementary education and engagement programs developed by Castle of Our Skins.

Following this summer’s performance of Anthony Davis’s X is the 2023 premiere of the full orchestra version of Nkeiru Okoye’s Harriet Tubman (libretto by Okoye; first performance 2014). In 2024, William Grant Still’s Troubled Island (libretto by Langston Hughes; first performance 1949), the first opera by a Black composer to be performed at a major American opera company, will receive its New England premiere by BMOP and Odyssey Opera, as well as a special 75th anniversary performance in New York City with BMOP and New York City Opera. Ulysses Kay’s magnum opus Frederick Douglass will have its New England premiere in 2025. Concluding the series is the world premiere of a BMOP commission, The Bridge, an opera about Martin Luther King Jr.’s years in Boston, written by Boston-based composer Jonathan Bailey Holland.

About BMOP
The Boston Modern Orchestra Project (BMOP) is the premier orchestra in the United States dedicated exclusively to commissioning, performing, and recording music of the twentieth and twenty-first centuries. A unique institution of crucial artistic importance to today’s musical world, BMOP exists to disseminate exceptional orchestral music of the present and recent past via performances and recordings of the highest caliber. Founded by Artistic Director Gil Rose in 1996, BMOP has championed composers whose careers span nine decades.

Each season, Rose brings BMOP’s award-winning orchestra, renowned soloists, and influential composers to the stage of New England Conservatory’s historic Jordan Hall in a series that offers orchestral programming of unrivaled eclecticism. Musical America’s 2016 Ensemble of the Year, BMOP was awarded the 2021 Special Achievement Award from Gramophone Magazine as “an organization that has championed American music of the 20th and 21st century with passion and panache.” The musicians of BMOP are consistently lauded for the energy, imagination, and passion with which they infuse the music of the present era. For more information, please visit BMOP.org.

About Odyssey Opera
Founded in 2013 by artistic director/conductor Gil Rose, Odyssey Opera presents adventurous and eclectic works that affirm opera as a powerful expression of the human experience. Its world-class artists perform the operatic repertoire from its historic beginnings through lesser-known masterpieces to contemporary new works and commissions in varied formats and venues. Odyssey Opera takes its audience on a journey to places they’ve never been before. odysseyopera.org