Road Company at Florida's Broward Center for the Performing Arts 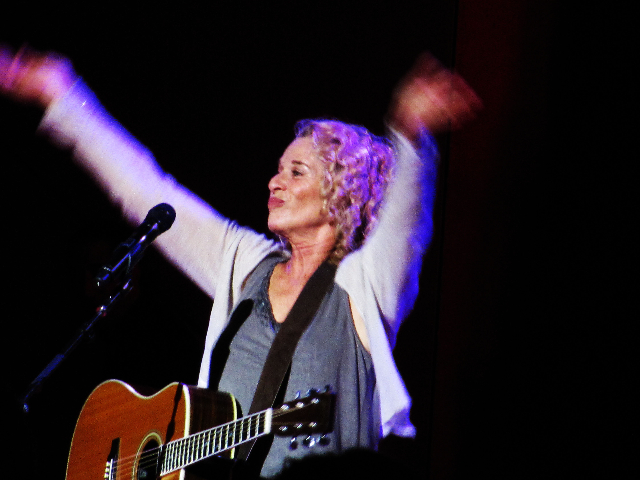 People attending a fine recent performance of the North American tour of the humorous, touching and relateable Broadway show “Beautiful: The Carole King Musical” clearly were rooting for the famed composer/singer-songwriter.

They clapped loudly in triumph when the renown musical artist asserted herself. They did likewise when her meddling but well-meaning motherly mom boosted her confidence.

If this audience at the Broward Center for the Performing Arts’ Au-Rene Theater was any indication, people pull for King not just because of her music. They want to see her succeed in this bio-musical. She comes across as an ambitious, yet humble, talented, yet insecure underdog. She’s a confident yet never narcissistic woman being portrayed at a time when females spent their time mainly doing housekeeping chores as well as cooking the meals for hubby and the kids. Your career was more prestigious if you were a man.

So when King displays confidence and ambition that seems ahead of her time, there’s an air of woman power surrounding the scenes. Note to feminists and women’s rights activists: Put your hands together for King! There’s more than one chance to do so in “Beautiful: The Carole King Musical,” which opened Tuesday night in Ft. Lauderdale. An equity North American tour is playing the Broward Center for the Performing Arts through May 22 before moving to other cities.

From the actors to the technical team, the production’s a triumph.

The scenic design, by Derek McLane, ranges from the glitzy and glamorous to the serene and picturesque. Realistic looking set pieces suggesting different locations roll on and off the stage with ease, ensuring a seamless, cinematic flow without a pace that’s too fast.

The eye-appealing spectacle draws us into the action as, of course, do the songs.

One could hear audience members singing along to the familiar melodies.

But “Beautiful” is not a concert; it’s a bio-musical or “jukebox musical.” However, the former term, in addition to carrying less negative connotations, more accurately describes the show. It tells a biographical but focused true tale of the beloved star. Songs King wrote alone, with her husband, Gerry Goffin and other contemporary songs by the likes of Barry Mann, Cynthia Weil and Phil Spector are weaved into story. While they’re popular as stand-alone songs, they’re contextualized for “Beautiful” to tell its story -- to enhance emotions and heartfelt moments when spoken words alone won’t suffice. Some of the songs more logically follow plot developments than others.

Toward the end of the show, King decides to move to Los Angeles to record her own album. Before she moves, she says goodbye to her friends by singing to them “You’ve Got a Friend.” The lyrics beautifully convey her devotion to them: “When you're down and troubled, and you need some love and care, and nothing, nothing is going right close your eyes and think of me, and soon I will be there. To brighten up even your darkest night.”

When Gerry asks King to marry him after she reveals she’s pregnant, the couple’s new song, which they sing for music publisher Don Kirshner, is “Some Kind of Wonderful.”

It’s an appropriate song that elaborates on their joyous moment.

“I know I can’t express this feeling of tenderness,” are some of its lyrics.

Hence the need for the full song, part of which goes, “Any time my little world is blue, I just have to look at you. And everything seems to be
some kind of wonderful…I just know when I'm in your embrace
this world is a happy place. And something happens to me
That's some kind of wonderful.”

Another number sung when King and Gerry’s relationship is on positive terms comes after she finds him fast asleep on their couch. For at least the moment, she has him all to herself. She can even cuddle with him if she wishes. But King wonders: What about the future? Will he continue to love her, a concern expressed in the longing “Will You Love Me Tomorrow?” The song also foreshadows the problems the couple will experience later in the show.

The musical, with a book by Douglas McGrath, doesn’t touch on King’s entire life. That would result in an unfocused and long show.

The musical begins and ends on a happy note, with King performing at Carnegie Hall. The show relates the story of an ambitious but insecure woman who follows her dreams, encounters obstacles, but maintains an indomitable spirit through it all, triumphing in the end. It’s a feel-good story, featuring a likeable underdog who climbed to the top, overcoming hurdles such as the second-class status of women. It’s not a dated notion; one need only conduct an Internet search with the words “Women’s pay inequality.” An article headlined “Gender Pay Inequality: Consequences for Women, Families and the Economy” pops up. Then there’s the issue of why “only 14 percent of top executives are women,” according to CNN.

The musical begins on an upbeat note when, in 1971, the 1942-born King is performing at Carnegie Hall. It’s hard to understand why the first song, sung at the very beginning before anything happens, is “So Far Away.” The song refers to someone the singer longs to see in person. However, that person is located a distance away. To whom is King referring? It’s not clear, at least not at the moment.

Following “So Far Away,” the action flashes back to 1958 Brooklyn, where a 16-year-old King tells her mother, Genie, she’s going to Manhattan to try to sell a song to music publisher Kirshner. Genie disapproves.

“Girls don’t write music; they teach it,” the older woman tells her daughter.

On the one hand, this mother-daughter exchange might cause some eye rolling. It’s your typical scene pitting a rebellious teenager against an over-protective, “I know better because I’ve lived longer” parent. But looked at differently, the scene illustrates Carole’s ambition; she’s a young woman ahead of her time, ready to make her mark on the world in a bold way that’s different from her peers.

At another point, lyricist Cynthia Weil meets King and cannot believe her profession.

“You’re a composer? You’re a girl!” she exclaims.

Yes, she is. And she can succeed in her career just fine, thank you, even without Gerry, the philandering husband who left her, King’s mother tells her. On opening night, a round of applause from the audience followed the older woman’s assertion that her daughter can get along “without Gerry” – words the production’s director, Marc Bruni, has the excellent Abby Mueller, as King, emphasize.

Mueller makes King thoroughly likable from the beginning, investing her with charm, modesty, drive, as well as a zest for life and music. Mueller’s expressive, versatile singing voice conveys sincerity, forcefulness, emotional pain, exasperation, modesty or joyousness, depending on the song.

There is drama in the form of songwriting competition between Gerry and Carole and another songwriting couple, Cynthia Weil and Barry Mann.

Becky Gulsvig portrays Weil as career-driven, but hardly ruthless or unlikable woman while Ben Fankhauser’s Barry Mann, her husband, has a nervous energy and comes across as somewhat nerdy.

Kudos also go out to The Drifters (Josh A. Dawson, Paris Nix, Jay McKenzie and Noah J. Ricketts) for their stylish, jazzy rendition of “On Broadway” and a rousing “The Locomotion” by ensemble members and Little Eva (Ashley Blanchet on opening night).

Mueller and ensemble members also deliver a passionate “(You Make Me Feel Like) A Natural Woman.”

That’s not something many would say these days about Donald Trump, the presumptive Republican candidate for the 2016 presidential election.

It’s doubtful he’d be welcome among the opening night crowd, with some of the things he’s supposedly said about women.

His words allegedly carry a lot more sting than “You’re a composer? You’re a girl!”

For information about touring venues, times, dates and ticket prices, log onto http://beautifulonbroadway.com/tour