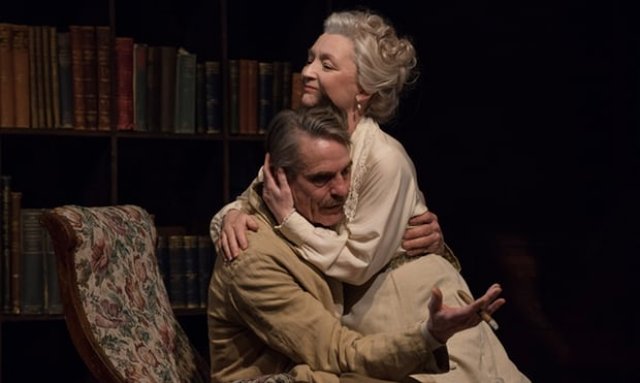 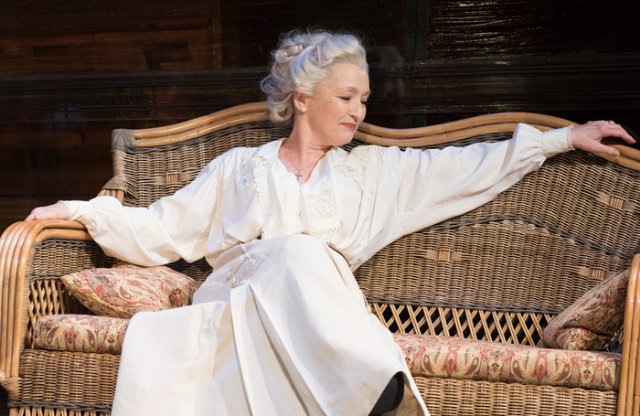 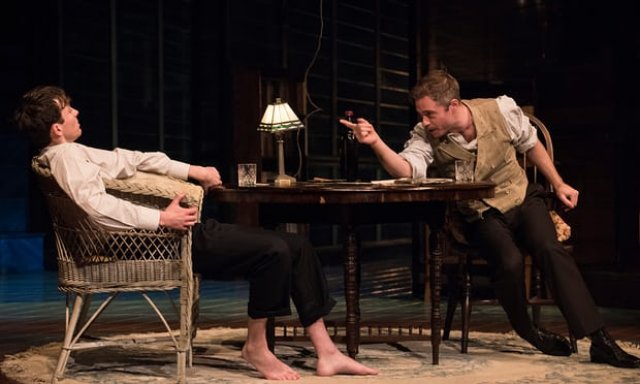 Matthew Beard and Rory Keenan as Edmund and Jamie

From the  moment you enter the Harvey Theater at the Brooklyn Academy of Music this is an extraordinary experience.  The set by Rob Howell is by no means a glass house, but it has the effect of one. The walls are semi-transparent. Tall bookcases line the central living room in one corner.  Stairs ascend. The front door of the house leads to a walkway visible from the living room. The kitchen is an invisible presence in the back.  Bridget the family cook never appears.  Cathleen the maid scampers back and forth depending on who is at home.

The dining area has a piano.  Its sounding board backs up against the see-through living room wall.  We hear Mary Tyrone's muffled performance as she tries to re-capture some of the glory of her convent days.

Cross-talk of the dialogue feels like real life. People speak as they walk upstairs and out of the center stage. Golden sunlight suffuses the stage at the beginning of the play,  That turns to an ominous midnight blue as night encroaches and deepens.

The ceiling which thrusts up at a 45 degree angle is marbled.  The movements of the characters are mirrored there and on all the walls.  We are both trapped in the room, reflected by it and expanded out of it.

Lesley Manville immediately dominates the stage as Mary Tyrone.  Although she cuts a strong image, if not figure, she is not the Mary of Vanessa Redgrave, who was simply too powerful.  All the subtlety of O'Neill's characterization is captured by Manville.  Her body appears firm.  Only once does she collapse face down on the floor.  It is in the movements of her hands, her tight but slim grip on her lace collar, the infinite variety of her malleable face that we catch desperation, fear, hope and memories. The long "o" vowels of two words echo haunting echoes: "home" and "alone."

O'Neill's language is often choral and repetitive.  For Mary, this is not home. As she wraps her tongue around that word, we catch all of the warm memories "home" holds.

Her husband James is cheap, a matinee idol who insisted on living in dire hotel rooms as he toured the country performing his signature piece, the Count of Monte Christo.  We hear this over and over again. Her husband and sons know its familiar ring and sometimes seem to welcome it as a sign that Mary is still with us.  Returning from a sanitarium stay, which we presume is for detox, she immediately figures out how to get prescriptions for morphine and to fill them.

Whether Mary is speaking to herself, the nuns or God, she is present.  She desperately wants her husband to admit the pain he has caused, and therefore her problem.  She wants Jamie to stop poking her and Edmund to stop telling the truth.

Words as spoken under the sensitive direction of Sir Richard Eyre, often sound beautiful, yet have no meaning, because we quickly learn that they can be retracted on a dime. When Edmund is diagnosed with tuberculosis, his miserly father wants to put him in a state institution.  Called on his penny-pinching ways, James says, "You can go anywhere you want.  The very best place.  As long as I can afford it." In the deep of the night, Irons finds an actor's cadence as he wraps gravel around the "r" of "great," repeating the word for a status he never achieved.

Audiences attend this production, which leaves you emptied, and yet full of feeling for a family fighting to stay together against insurmountable odds.  Allowed into the intimacy of a family home with no holds barred, we find ourselves seared and enlightened.