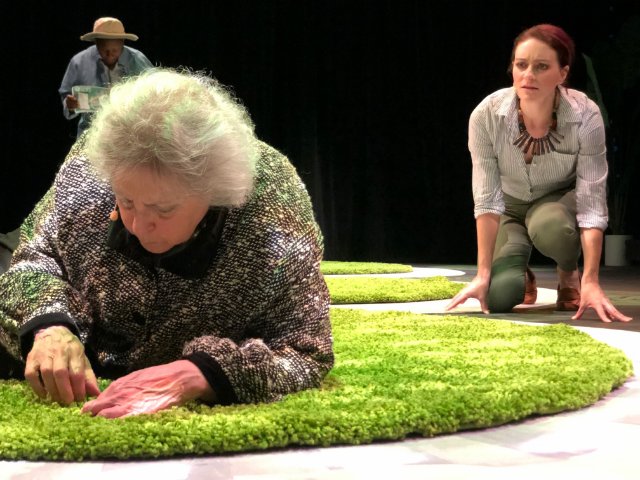 Photo by Nicole Stodard Carol Sussman (foreground) as the ape and Sabrina Lynn Gore, behind her, as Brodie, a linguist drawn to the creature. 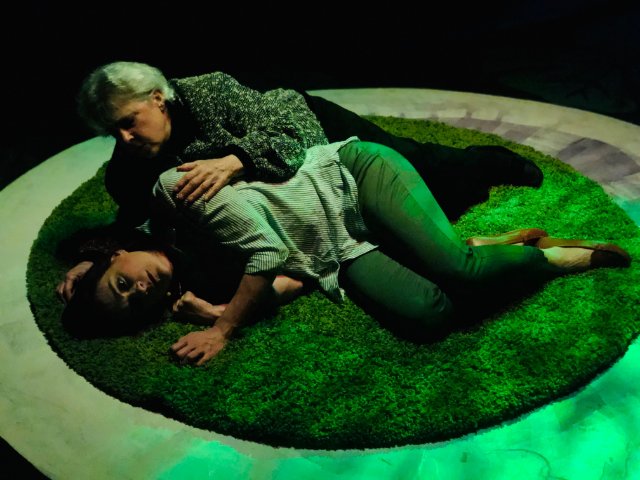 Photo by Nicole Stodard At the end of the play, a saddened, overwhelmed Brodie (Sabrina Lynn Gore) is comforted by none other than an ape at the zoo (Carol Sussman). 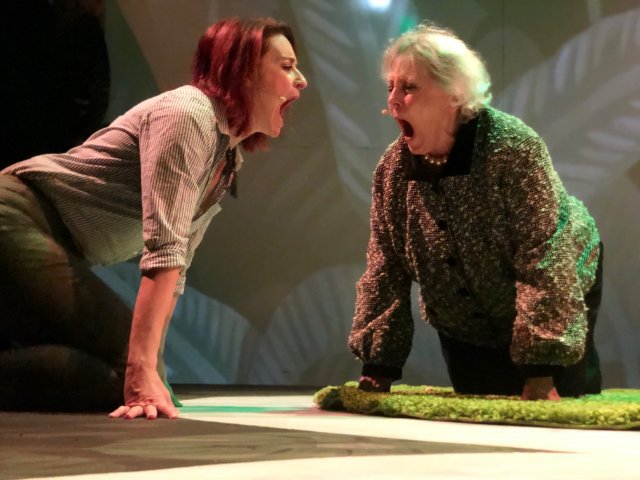 Photo by Nicole Stodard Brodie (left, Sabrina Lynn Gore) gets on the same level as the ape (Carol Sussman).

Awww, isn’t it cute how the little monkey with sad, puppy-dog eyes is sucking on a pacifier? It’s just precious!

Surely, you can’t miss the image on the cover of Thinking Cap Theatre’s program for its current, impressive production of the odd, yet intriguing and relevant play, Precious Little.

But don’t think for an instant that Madeleine George’s work is cute, precious or fluffy children’s fare.

Quite the contrary, the deceptively titled Precious Little is a multi-layered, even perhaps dizzyingly complex piece featuring some big ideas. It’s the kind of play we’ve come to expect from such professional companies as Thinking Cap and, to the north, Palm Beach Dramaworks, whose tagline is “Theatre to Think About.”

Undoubtedly, you’ll want to fasten your, well, thinking cap. That’s because George, wife of playwright Lisa Kron (Fun Home), offers plenty to ponder long after you’ve exited the theater. While in it, watching the action unfold, you might find yourself trying too hard to process all the themes stacked upon each other.

Perhaps that is why an audience at a recent matinee was so quiet, you couldn’t hear a single gasp, laugh or sniffle. Or, maybe they were simply mesmerized.

Regardless, as hard it might be, don’t rack your brain mid-performance. Give George’s piece a chance to connect with you, and for you to connect with it. No doubt, a connection is inevitable. It is easy to become emotionally invested in Precious Little -- a moving, relatable piece which touches the heart, just as it offers it offers calisthenics for the mind.

Connecting is one of the major themes in the play. Specifically, Precious Little examines humans’ inherent need to connect with one another, and how communication – verbal and non-verbal — fails or succeeds in allowing us to forge connections.

But that’s not all George offers.

Indeed, this taut play with short, pithy scenes packs a bunch into its roughly 90 minutes, running without an intermission.

In particular, the playwright asks us to consider themes and ideas such as loss, preservation, commitment, motherhood, caring for an elderly, sick parent, the risks associated with pregnancy at an older age, the effects and power of words, language (specifically dying languages), our general discomfort with impermanence and how each of us finds different sources of comfort. Surprisingly, the play doesn’t feel overstuffed.

Speaking of finding that reassuring or comforting bond, George introduces us to one of the main female characters – an ape.

Strange, you might say, and other may agree with you. But rest assured that there is nothing close to beastiality in this play.

Rather, one might view Precious Little as similar to, say, a science-themed Deborah Zoe Laufer play, with an ounce of the absurd.

While one can debate the purpose behind the play’s title, this much we know: Brodie is a gifted linguist at a school of higher education in an unnamed city. This 42-year-old pregnant scholar undergoes a test and learns unsettling news about her unborn baby. Surprisingly, she finds comfort from one of the last speakers of a dying language. Brodie also finds support in a talking ape at a zoo which she visits with her girlfriend.

Most likely, playwright George has left the specifics about the fetus’ abnormality ambiguous. After all, she wants us to think, as does the aptly named Thinking Cap Theatre. Still, we might deduce that the baby, if and when she is born, might have difficulty speaking – or never speak. And so, perhaps as a way to block out such upsetting news, or trying to empower herself, Brodie concentrates on a project of preserving audible language.

To hear Brodie explain the problem, disappearing languages should concern us all.

“When languages die out, and more and more languages are dying out every day, we don’t just lose the indigenous knowledge each language may carry,” she says. “We lose an entire way of understanding what cognition is, what consciousness is, what, in the profoundest sense, human beings are.”

Even though it might seem strange to include an ape as a character in a play about a linguist and her unborn baby, one cannot deny the primate’s similarity to human beings. So perhaps this fact, and a person's human/beast dual nature, is what draws someone like Brodie to an ape.

The creature in George’s play clearly leans toward human traits. She is one of nine characters that just three actors embody.

As the only performer playing one role, Gore is presenting a master class in naturalistic acting. She doesn’t act the part of Brodie, but rather becomes her.

Each gesture, facial expression, word and emotion sounds and looks generally spontaneous and believable. Moreover, none of Gore’s acting feels forced. True, there’s a moment when it’s hard to hear her. And when Brodie learns that the ape can talk, she could pause in surprise and respond in a more adamant voice.

Gore makes it obvious that this is one complicated, well-drawn character. The performer particularly makes palpable Brodie’s sense of urgency and sense of pride when she feels another character is condescending. Also, we sense how hard it is for the character to communicate when words fail her.

Meanwhile, Sussman imbues the elderly Cleva, the speaker of the dying language, with an endearing shyness and eagerness to please. In addition, Sussman conveys just a hint of stubbornness.

That makes life difficult for Evelyn (a pleasant, but somewhat impatient Duncan). Evelyn is Cleva’s protective daughter, who is becoming overwhelmed with caring for her ailing, aging mother.

Duncon doesn’t fare as well as Brodie’s girlfriend, Dre, who could come across as more quick-witted, hip and annoying. Duncon’s Dre seems too polite to even curse, which this young tomboy does freely.

To her credit, Sussman doesn’t seek laughs in her portrayal of the ape. And she doesn’t try too hard to mimic one, opting for truly a human-like creature. Sussman, who doesn’t wear an ape’s costume, and wears no makeup suggesting one, hunches forward. She taps her chest lightly with fists a few times and looks out with curious, scared eyes. When she speaks, she does so in an oddly relaxing, wonder-filled tone. It deepens this non-human character’s mystery.

Generally, the actors are convincing and segue smoothly from one character to another. And credit director Nicole Stodard for helping the performers convey moments of clarity, when words flow easily from their characters. Meanwhile, the director also coaxes credible performances when characters have trouble finding words.

Stodard creates tension from the production’s outset. Specifically, the performers move in a circle rapidly before stopping to suspiciously size up each other. They then repeat the process before they all face one direction. This action, which is not included in George’s script, is nonetheless a wise directorial choice. It creates tension and grabs our attention immediately.

On the other hand, in keeping with the playwright’s instructions, Stodard has opted for a minimal set design (the scenic designer is Alyiece Moretto-Watkins).

The set’s focal points are three concentric circles, a smaller one inside a larger. Clearly, they exist separately, but nonetheless touch each other. This can reinforce the conflict between our need for our own space and our need for contact.

Within these circles, Moretto-Watkins establishes locales such as a health-care setting, Brodie’s office and a recording studio. Although the settings are clear, Bree-Anna Obst’s projections include a board which serves as a kind of Word document on a computer. Onto it, the settings are typed.

The set design is neat and compact, like George’s play, despite its complexity.

Within this space, Eric Nelson’s lighting enhances mood. Also, he uses appropriate colors – green for the zoo, for instance. Often, the lighting is otherworldly, befitting this non-realistic play.

It’s safe to say that for some, parts of Precious Little might carry more meaning and seem more compelling than others. In fact, you might find yourself confused or restless at times.

But overall, George’s play will likely connect with you.

Undoubtedly, it will do so in a manner that is deeper than that adorable monkey on the program’s cover.

Thinking Cap Theatre’s production of Precious Little runs through May 26 at The Vanguard in Ft. Lauderdale, 1501 S. Andrews Ave. Performances are at 8 p.m. Thursday through Saturday, as well as 3 p.m. Wednesday and Sunday. General admission costs $40. For tickets, visit   https://www.brownpapertickets.com/event/3922628 or call (954) 610-7263.