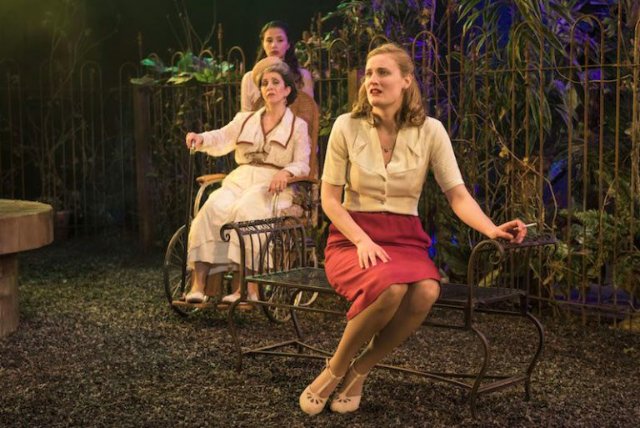 Playwright Tennessee Williams is a master of his craft. He is skilled at conjuring up a time or place and creating a story that snares you in its web from the beginning. In Suddenly Last Summer, his 1958 play now on stage at Raven Theatre, he foreshadows the play’s grisly ending in the first moments, although we don’t realize that until later. Jason Gerace directs this tense 90-minute drama.

The play is set in the misty garden of a mansion in New Orleans’ Garden District in late summer 1936. Violet Venable (Mary K. Nigohosian), a wealthy widow, is telling the story of her poet son Sebastian, who died under mysterious circumstances the previous summer in Spain. Mrs. Venable and her son had a close—really close—relationship as traveling companions. Each summer they traveled to the elite spots in Europe and Sebastian wrote his poem, his one annual poem. But last summer he had pushed her aside to travel to Europe with her niece, Catherine Holly (played by Grayson Heyl). Catherine returned from that fateful trip with a bizarre story that has made Violet insist that Catherine has turned mad.

Mrs. Venable’s visitor in the garden is Dr. Cukrowicz (Wardell Julius Clark). (His name is “Polish for the word meaning sugar. So just call me Doctor Sugar.”) The doctor is a brain surgeon, pioneering the practice of lobotomies, and that is why Mrs. Venable has sought him out. Catherine is restrained and medicated in a hospital now, but if she could only be surgically pacified, Mrs. Venable thinks, she might be calmer. And Mrs. Venable would be spared hearing the story of her son’s death, which she swears is all lies because her son, at age 40, was chaste. (He wasn’t, of course, because bad boys can easily deceive their loving mothers.)

Violet says, “I’m devoting all that’s left of my life, Doctor, to the defense of a dead poet’s reputation.”

Adding more family tumult are Catherine’s mother, Mrs. Holly (Ann James) and her brother George (Andrew Rathgeber), who smells a possible bequest from Sebastian—unless his sister talks too much.

Suddenly Last Summer builds suspense to its dramatic ending, when Catherine, who thinks her tongue has been unleashed by an injection of the doctor’s truth serum, tells all. The end.

Gerace’s direction draws out excellent performances from Nogohosian as the aging Mrs. Venable, who ends each day with a frozen daiquiri at exactly 5pm, and Heyl as Catherine, nervous, distracted, but firmly in control when she finally gets to tell her story. Clark is a capable and ever-solicitous doctor. Rathgeber as Catherine’s younger brother isn’t the right age to portray a first-year college student. And Sebastian? The most important character in the story never appears.

I’ve tried to describe how Williams teases out the story without giving away the ending. I do have a question, however. How can there be such a thing as a spoiler for a play that is 60 years old, has two film versions (1960 and 1993) available on DVD, a Wikipedia page with complete plot, and countless productions by college and regional theaters?

I always feel like Tennessee himself is sitting at the back of the theater, watching to see his story play out. Because there’s a bit of the man himself in every play he writes.

You can see Suddenly Last Summer at Raven Theatre, 6157 N. Clark St., through June 17. Tickets are $46 (discounts available) for performances Thursday-Sunday. Philip Dawkins’ play, The Gentleman Caller, about Tennessee Williams and William Inge, continues in an excellent production in Raven’s West Theatre through May 27.