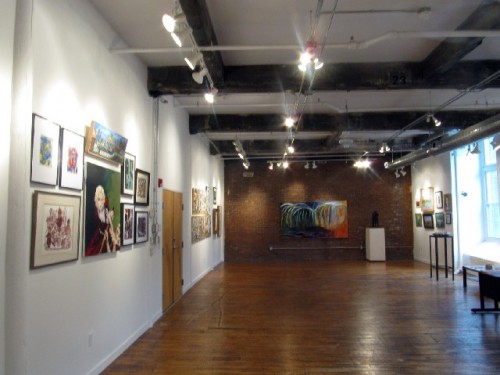 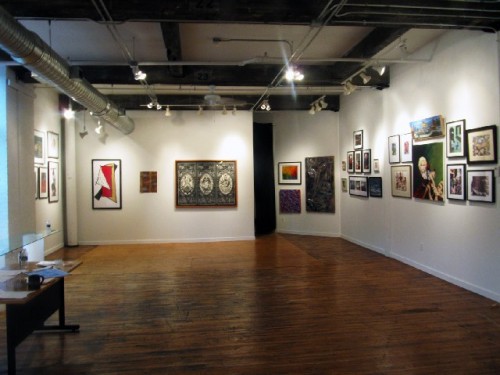 Looking the other way. 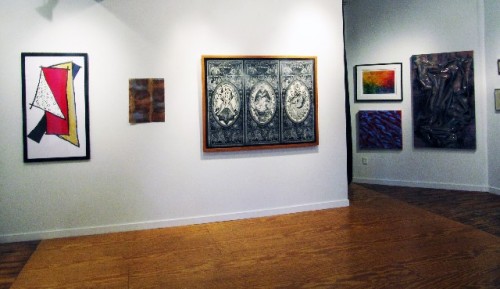 A detail of the installation. 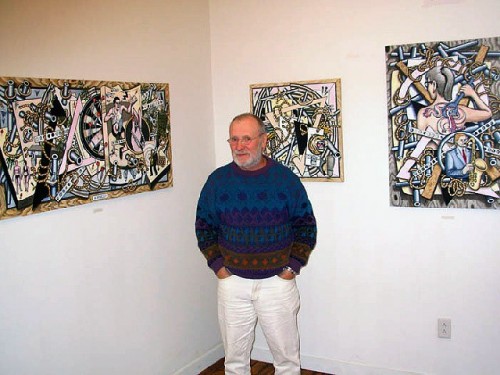 The late Norman Thomas with a selection of works on view in the current Berkshire Salon. 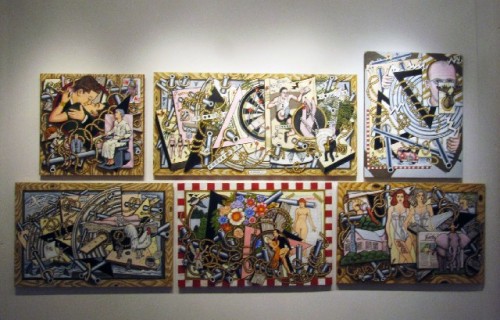 A grid of works by Thomas in the Salon. 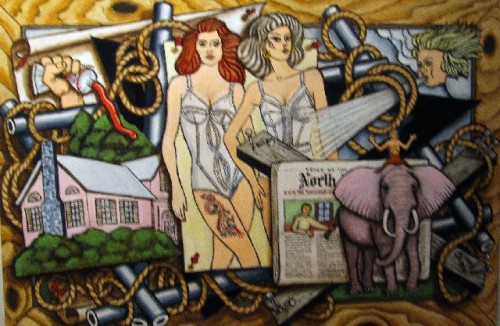 The Cubist/ Pop painted collages include many surprising elements. 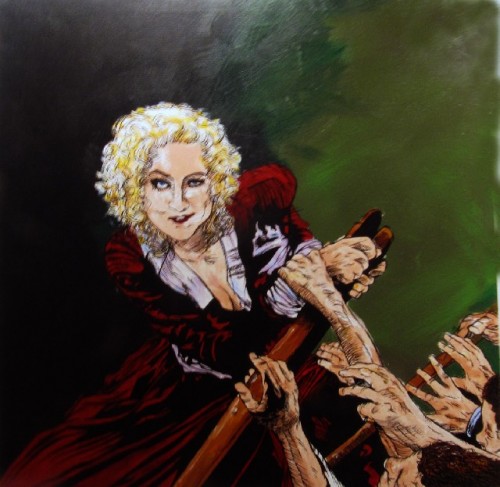 Ken Bastard who has moved to Pittsfield from New York shows a scene from the film Metropolis.

Each year Erica H. Adams ships a piece from her Cape Cod studio. 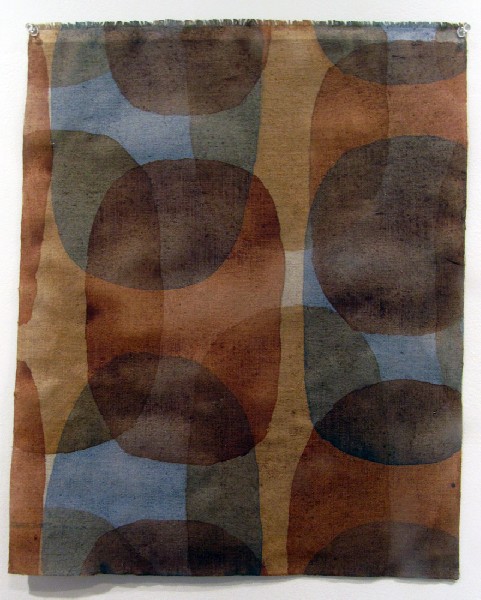 Sarah Sutro started working with natural dyes and pigments while living in the Far East. 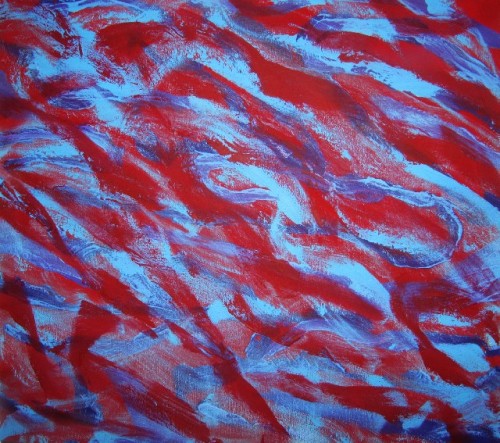 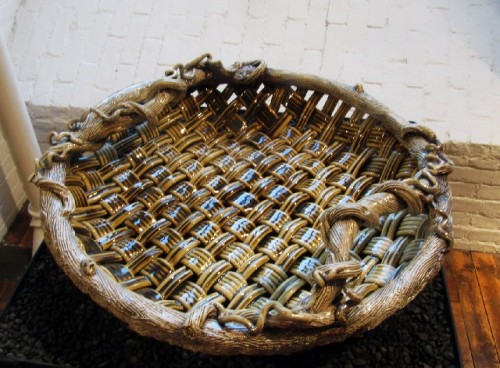 A wood fired basket by Phil and Gail Sellers. 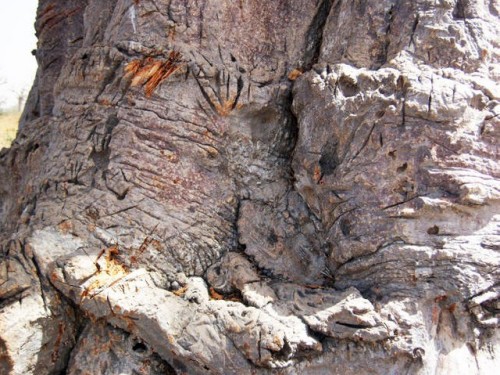 An image from the series Birches and Baobab Trees by Astrid Hiemer. 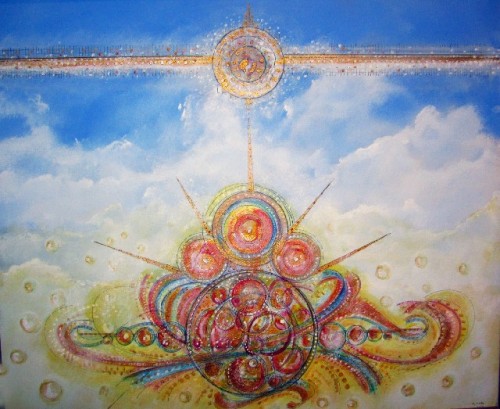 A visionary painting by James Fissell. 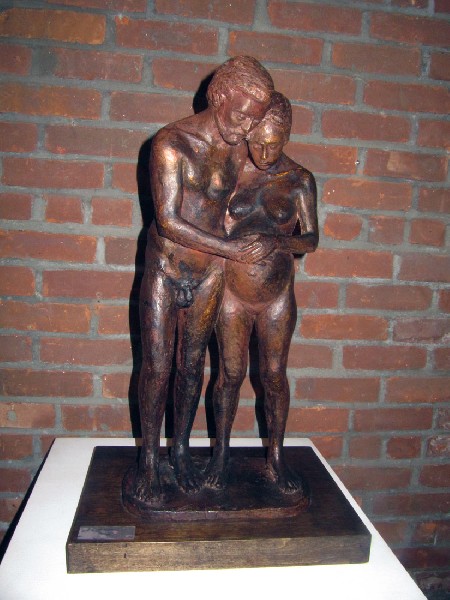 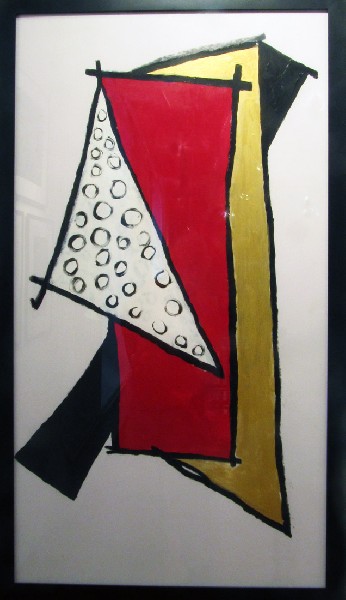 A study for a wall sconce by artist/designer Mark Favermann. 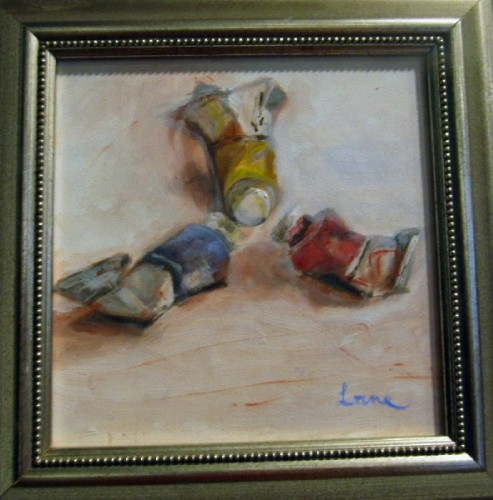 An intimate painting by David Lane. 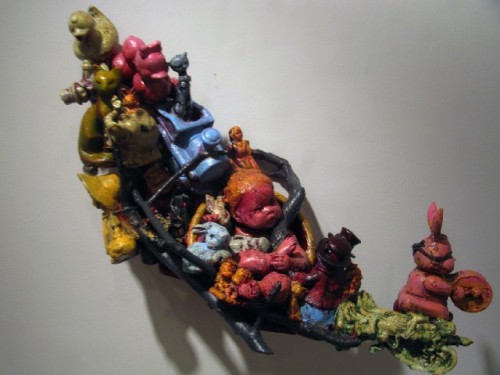 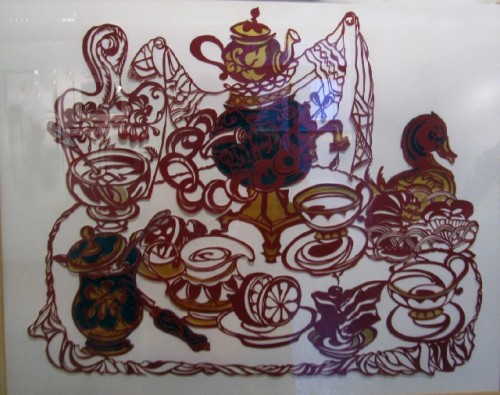 The lively and much anticipated Berkshire Salon, featuring forty plus artists opens at the Eclipse Mill Gallery in North Adams on Friday, May 18. A reception for the artists will be held from 6 to 8 PM.

The Salon continues on weekends, from noon to five PM, through June 10. The artist run Eclipse Mill Gallery is the largest, non museum exhibition space in the Berkshires.

Five years ago the Berkshire Salon was launched as an outreach and sustainable resource to the many and varied artists working in the region. As a nonjuried Salon, the mandate was to be inclusive. It was designed to welcome anyone interested in showing their work and paying a modest fee of $15. This is a fraction of what is normally asked to submit to juried exhibitions.

As one might expect, the resultant exhibition, in the spirit of the legendary Salon des Refusés, which was held only once in Paris in 1863, is eclectic and controversial. There is a mix of amateur and professional artists. The fun is that it is often difficult to determine which is which.

Over the past several years there have been remarkable discoveries of artists whose work was rarely shown in the Berkshires. This has led to new opportunities to be curated into Eclipse projects and featured in other regional gallery and non profit programs. In this regard the Salon has a remarkable track record.

On the occasion of this Fifth Salon, which I am co curating with Brian Handspicker, I was looking back through the archive of past projects.

It was stunning and poignant to realize that the recently deceased, Eclipse Mill artist, Norman Thomas, and his wife Joan Kiley had participated in the first Salon. Norm could be feisty, and we often didn’t see eye to eye on what was shown in the gallery program. He and Joan curated a couple of  Eclipse shows and became members of the North Adams Cooperative Gallery.

Norm was a serious and committed artist following his own instinct. I included some of his humorous work in a show called What’s So Funny. For a North Adams gallery exhibition last year, we discussed his lively series of urban landscapes.

For me his most interesting series conflated cubism with renderings of pop flavored, vintage ads and magazine images. Working up to them through experimenting with color and space he painted a number of  “Abstracts.”

They led to dense, complex, cluttered paintings with zany juxtapositions of seemingly disparate images. Like women in vintage corsets, nobody wears such restricting undergarments any more, and say, an elephant, or a copy of the North Adams Transcript, ropes, poles, and faux wood frames.

As a tribute in memory of Norm, we have installed a dense grid of six of the paintings from the Cubist/ Collage series. We are grateful to Joan Kiley for the loan of the paintings and for showing one of her portraits. Surely Norm would have been pleased with being featured in the Salon.

Curating a Salon is challenging. You get an earful about “why is my work hung here and not there.” It’s daunting to sort out works by 40 or so very different artists and try to hang a show that looks clean and makes sense.

This year’s Salon is spectacular. A museum quality installation.

There are exciting works by new artists as well as the latest efforts by Salonistas we have been tracking from the beginning. By now there is a tradition and track record. In a sense the Salons have become self promoting annual events.

Brian and I both sat for pickup days. So I interacted with about half of the artists and he registered the others. He was also busy on the phone with a list of prior exhibitors.

For my five hour shift I intended to catch up on reading but didn’t manage to get through a page. There was a non stop flow of artists.

It was fun to interact with by now old friends. Like Terri Taft, a landscape painter, who we see all summer when she ushers at Williamstown Theatre Festival. During intermission we trade thumbs up and thumbs down. North Adams Transcript writer Jennifer Huberdeau always participates as does her friend Amy Brassard. Amy is showing a small black and white drawing. This year Jennifer has a horizontal rendering of Hancock Shaker Village. It’s a peach. Eclipse neighbor, Liz Cunningham, just back from winter in Seattle, not only dropped off work (two collaged abstractions) but stayed to help install. Much appreciated.

One of our Salon discoveries a few years ago was the severely handicapped young artist A.J. Schlessinger. He works with a “Tracker” the highly trained Jane Ellen who interprets his commands for color and follows his laser directed strokes on the canvas. A couple of years ago he did a residence in the mill working in artist Rick Harlow’s studio. That was followed by a show in the gallery curated by Julie Seitel. I bought a painting from the show which hangs in our bedroom. It was great to have a new piece from A.J.

Our friend Robert Henriquez showed in the first Salon. Subsequent to that he was included in a summer long survey of Haitian Art, a couple of summers ago, curated for DownStreet by Melanie Mowiski. She was included in the Eclipse exhibition Illustrious; Art of the Book, curated by Astrid Hiemer. For this Salon Astrid is showing two images from "The Series: Birches and Baobab Trees.”

As you see one thing leads to another forming a thread that weaves through the Salon.

Over the past year we have enjoyed our neighbors from across the hall Sarah Sutro and Michael Bedford. They have returned to the States after many years in the Far East. It is where she started to work with hand made dyes and pigments that are materials used in the unframed stain painting in the Salon.

Similarly, we are pleased to show works by new Eclipse residents. Linda and Opie O’Brien create sculptures crafted from found materials. In one of the largest works in the exhibition Louise LaFond shows a triptych of vertical etchings. Both the imagery and technique of the piece are utterly fascinating.

During the past year our neighbors Phil and Gail Sellers of River Hill Pottery have been experimenting with more complex pieces wood fired off site. The visual impact is subtle and dramatically different. A choice example of the new series is on view in the exhibition.

On every level The Berkshire Salon 2012 is better than ever. Come and see why.