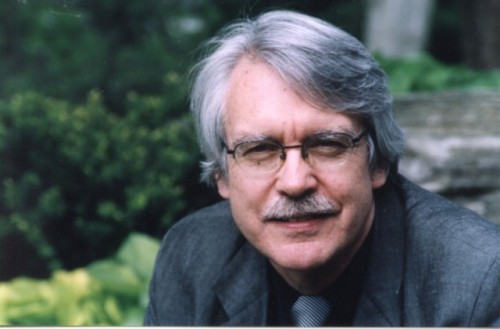 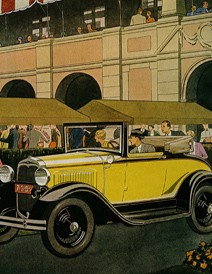 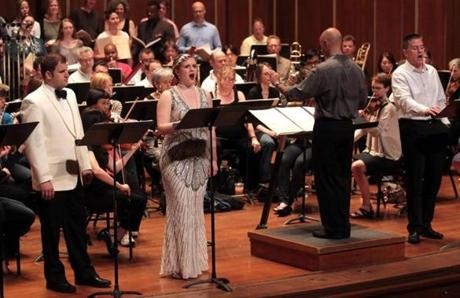 The Emmanuel version is coming to Tanglewood. 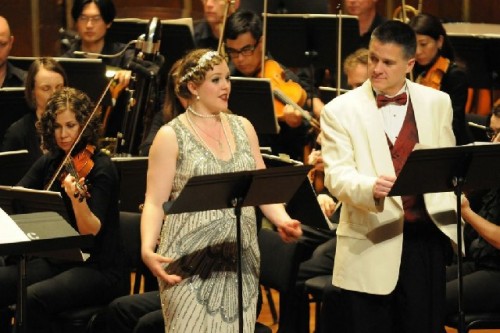 Fresh as a Daisy.

Talk about fortuitous timing. When Emmanuel Music set the date for its concert performance of John Harbison’s “The Great Gatsby,” it had no idea that a movie blockbuster based on the same novel was premiering the same weekend. Infected by the enormous publicity the Baz Luhrmann movie received, it seemed that everyone in town was buzzing about Jay Gatsby and his gin-fueled parties. Jordan Hall was close to sold out. But even without the media hubbub, the single performance would probably have filled the hall to the rafters: I doubt if Leonardo DiCaprio’s fan base overlaps significantly with that of late twentieth century opera.

After all, Harbison is a local boy, Boston’s preeminent composer, and his local supporters, who are legion, would have turned out for the belated Boston premiere of his single grand opera (there are two others) in any case.

The opera’s production, even in concert form, refutes what might be Fitzgerald’s most famous quip: that there are no second acts in American lives. This was an opera that seemed to die in the years after its 1999 premiere at the Metropolitan Opera, which had commissioned it. It was picked up by the Lyric Opera of Chicago the next year, and in 2002 the Met did it again, but that seemed to be it. And, as Harbison has recounted, he was so disappointed by its lukewarm reception that he put it out of his mind, moving on to things he knew he did well, like writing symphonies. “I loved opera but opera didn’t seem to love me back,” he told the Boston Globe.

But over the years, as he extracted the songs for a work titled “Gatsby Songs” and created a “Gatsby Suite,” Harbison realized that the opera might have a second act if he cut it more. There was interest in it in other quarters as well. A small opera company in San Francisco created a reduced version of the orchestration, which was written for such large forces that small companies couldn’t produce it. Its reduced version was produced last year and evidently other companies are interested in doing it. Emmanuel Music presented the full orchestration with Harbison’s final cuts for the first, but one hopes not the last, time. The work is now trim and moves fleetly, more in the spirit of its source.

(Harbison isn’t the only composer commissioned by the Met for a contemporary grand opera who has had to confront the problem of their work’s apparent death after its premiere. John Corigliano’s “The Ghosts of Versailles” was better received than “Gatsby” at the time it was first performed, but few other companies were able to take it on because of the demands it made. In 2008, the Opera Theatre of St. Louis and Ireland’s Wexford Festival commissioned a reduced version of the score. I attended the performance in St. Louis and it was an immensely enjoyable experience, a real hit. There have been no subsequent productions since then, however.)

Both Harbison’s “Gatsby” and Corigliano’s “Ghosts” deserve to be heard more often. It certainly makes one wonder why they languish while less substantial works like Jake Heggie’s “Dead Man Walking” and Andre Previn’s “Streetcar Named Desire” have entered the repertoire. It can hardly be the fact that they are based on obscure sources – Fitzgerald’s novel is just as popular as Tennessee Williams’s play. Indeed, Daisy Buchanan resonates in popular culture as much as Blanche Dubois does.

Maybe a curse accompanies a Met commission. Samuel Barber is said to have never recovered from the flop his big Met commission, “Antony and Cleopatra,” made at its premiere, the company’s first production in its new Lincoln Center facility.

Ryan Turner, the superb Emmanuel Orchestra and Chorus and the assembled soloists made a great case for Harbison as an opera composer, although I have to admit that I still felt that he was too earnest by half. With his music for Myrtle and his infectious “jazz” songs he showed that he could loosen up. One wishes he’d been able to let his hair down even more.

Harbison is arguably the best orchestrator of his generation, and one of “Gatsby” ’s great strengths is in its orchestral passages. The overture, which switches seamlessly from the late modern style Harbison practices to the popular white jazz styles of the Gatsby era, was masterful, and Turner was sensitive of every detail. In addition, there was an orchestral interlude between each of the 10 scenes. Harbison’s orchestral writing is dense and finely nuanced, perhaps too dense and nuanced for opera, but one of its joys is the color he deploys throughout it; the score is rich in brass, woodwinds and percussion, evoking a passing train, the honk of an automobile, the industrial nature of the “Valley of Ashes” where Myrtle lives with her mechanic husband Tom, the nighttime stars and rain, among many other things.

The opera is full of arias that distinguish the characters. Daisy’s nostalgic “Where is the old warm world” and Gatsby’s arias full of longing underscore the melancholy nature of the work that often gets lost in the surface gaiety of Gatsby’s fabulous North Shore Long Island parties. Tom Buchanan’s angry aria about the “lowlifes” that are taking over society reveals his brutishness. The one great aria that could be pulled out of the opera as a concert piece is Myrtle’s haunting “Waiting” aria, which expresses her longing as she waits for Tom to come to her, to call – to acknowledge her existence.

There are some fine ensembles as well. In the first scene, Daisy and her friend the golf pro Jordan Baker sing a languorous duet, “Soon it will be the longest day of the year,” that evokes Samuel Barber’s song cycle “Knoxville, Summer of 1915.” The first act ends with a rapturous duet, chords shimmering in the manner of Olivier Messiaen, for Gatsby and Daisy as they remember their first meeting five years earlier in Louisville.

And then there are the dance, society-band jazz, tango and pop songs that serve as audio background for the endless parties. They sound as if they were appropriated from the popular charts of the time, but Harbison wrote them himself, demonstrating his versatility. (Let’s hope he doesn’t venture into hip-hop, however. His California peer John Adams wrote a hip-hop opera, “I Was Looking at the Ceiling and then I Saw the Sky,” that was a first-class embarrassment.)

The cast assembled was superb, if not perfect. As Daisy, Devon Guthrie didn’t sound like money, but she had a star-quality soprano voice that was capable of evoking every emotion from longing, to regret, to nostalgia that her character expresses. As Gatsby, Gordon Gietz’s tenor was appropriately dramatic but with sweet tones at the top. As Tom Buchanan, tenor Alex Richardson sang with menace and a sense of incipient violence. As Jordan Baker, Krista River sang with a no-nonsense mezzo that paralleled her cool approach to golf. In the crucial role of the narrator Nick Carraway, David Kravitz’s powerful baritone placed him authoritatively at the center of the action. His “Gatsby, they’re a rotten crowd” utterance, more spoken than sung, neatly erased any sense of jazz-age mirth that might have lingered, and when he notes that it will soon be his thirtieth birthday, marking “a decade of loneliness,” he brings attention to the emptiness of his life and that of the other principal characters.

As the mechanic George Wilson, David Cushing sang with a gravelly bass that made his working class status evident. Charles Blandy’s light tenor was perfect as the radio performer, singing the pop songs through a megaphone. And veteran baritone James Maddalena was appropriately vulgarity in the role of bootlegger Meyer Wolfshiem. The only singer I was less than thrilled by was Katherine Growdon, who lacked the slatternly quality the role of Myrtle calls for. Of course, with Lorraine Hunt’s Myrtle so strong in memory, no one would have satisfied in that role.

The production was a concert opera, but Turner made the right decision to have the cast wear costumes appropriate to the times, the men in white-jacket formal wear, Gatsby with a red vest that bore a heavier significance as the opera progressed, the women in gowns that underscored their character, Daisy in a shimmery white gown, Jordan in a no-nonsense dress and Myrtle as a flapper. The Radio Singer wore a straw hat. This showed much progress from the concert version of “La Clemenza di Tito” Turner led last year, in which everyone wore whatever he or she wanted – black tie and a brown business suit, a pair of glamorous gowns and a dress that looked like something you’d wear to a Saturday evening dance at a Dallas country club. It made a hideous stage picture. Even concert versions of opera have a visual element, which should never be forgotten.

For readers in the Berkshires, note that the production will be reprised July 11 at Tanglewood.