Water by the Spoonful 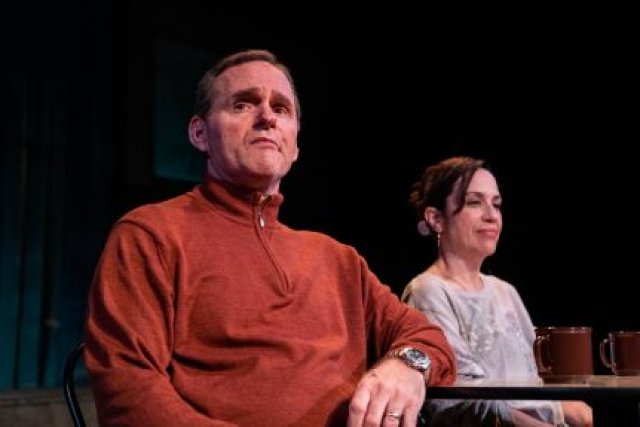 Photo by Ryan Arnst Christopher Dreeson as “Fountainhead” and Arlette del Toro chat during a scene from New City Players’ production of “Water by the Spoonful.” 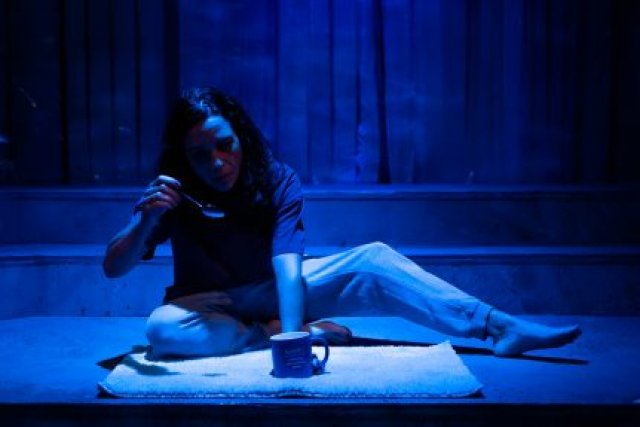 Photo by Ryan Arnst The title ‘Water by the Spoonful’ is symbolic. In the above photo, Arlette del Toro, as Haikumom, appears in a scene from the play. 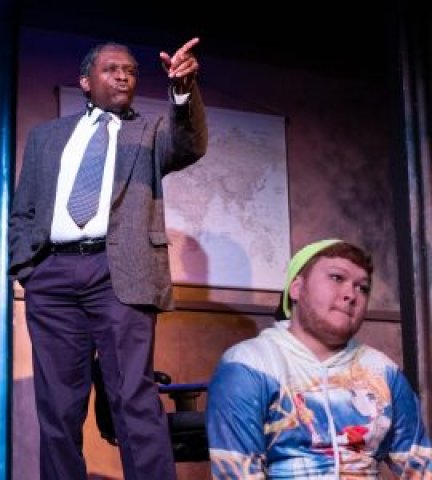 If you are trying to escape from a stressful past or painful situation, taking small, manageable steps toward a brighter future can work out for the best. In fact, leaping toward the “light at the end of the tunnel” can backfire.

Water by the Spoonful, Quiara Alegria Hudes’s Pulitzer Prize-winning, warm, comic, and dramatic, richly symbolic play, reminds us of this.

The play seems to feature two different plotlines. One follows drug addicts from different parts of the world. They meet regularly via an online chatroom in an effort to quit using. Meanwhile, another plotline follows injured Iraq war veteran Elliot Ortiz. He struggles to find himself and end the flashbacks that haunt him even years after his service.

Hudes has linked the two plot strands. Specifically, the characters are each trying to escape a painful past and start a new beginning. With equal amounts humor and pathos, as well as dramatic tension and nuance, Hudes paints a compassionate portrait of likable, identifiable, and well-drawn characters. They are seeking connection and trying to improve their lives. Also, through her play, the author gently reminds us that we are not alone in our struggles.

Hudes has set “Spoonful” in 2009. That is six years after Ortiz left for Iraq. He has returned to his home in Philadelphia, honorably discharged from service due to his leg injury. Ortiz works at a Subway sandwich shop, but has trouble concentrating sometimes. Primarily, that is because he experiences flashbacks in the form of an Iraqi man’s ghost. Ortiz supposedly killed the man. In the flashbacks, the spirit repeats a phrase that suggests that Ortiz killed a harmless man.

Meanwhile, Ortiz’s birth mother, Odessa, is a recovering addict who runs an online chatroom for fellow addicts and works odd janitorial jobs. Due to her addiction, she has been unable to care for Elliot or his sister. She died as a child from dehydration due to the flu. To this day, Elliot blames his mother for his sister’s death. If you believe him, mom was too busy getting high to care for her daughter.

In place of Odessa, her sister, Ginny, has cared for Elliot. Unfortunately, Ginny dies during the play. And, so, it falls to Elliot and his cousin, Yazmin (a compassionate Pryscila Cassiano Salinas), to arrange the funeral and the scattering of Ginny’s ashes.

Only after the funeral and scattering  can Elliot and Yazmin move on and begin a new life. Meanwhile, over the course of the play, the addicts improve to the point that they, too, can start over.

Undoubtedly, Water by the Spoonful is a sad play. Even so, thanks to copious amounts of humor, the piece never depresses. Just when something sad happens, the characters use humor to make their situation tolerable. Of course, this reminds us anew of humor’s power to heal and help us make it through the day.

Certainly, “Spoonful” feels vital today. That is partly due to the current addiction crisis. Also, emerging from a pandemic, we know quite well how important the Internet was (and is) to keep us connected with others, despite time differences and long distances. In “Spoonful,” the addicts become like family, even though thousands of miles separate them. For instance, a couple characters live in Philadelphia and San Diego. Meanwhile, another lives in Japan. Still, they are able to regularly communicate with and rely on each other. It is as though they were next to each other, with a mere computer screen separating them.

The play’s title refers to the spoonfuls of water that doctors had asked Odessa to feed her flu-stricken, dehydrated daughter. Giving her water in small, manageable amounts would have allowed the child to remain hydrated without overwhelming her ailing body. The title can symbolize the small, yet manageable steps that people trying to escape emotional pain can take to slowly, but safely, arrive at a better place. Overdoing it, for instance, by quitting using drugs cold turkey, can have negative consequences for the user’s body.

Often, simply admitting that one has a problem can go a long way toward an improved future. A character who goes by the chatroom name “Fountainhead” learns this after he breaks into the chatroom and conveys arrogance. However, as he develops relationships with his fellow addicts, he turns into a compassionate man and trusted caregiver. But first, with Odessa’s guidance, he comes to admit that he has a problem — and eventually admits to his family that he is an addict.

In New City Players’ now-ended production, the acting was generally believable and moving.

As “Fountainhead,” whose real name is John, Christopher Dresson’s telling facial expressions and tone of voice dripped with arrogance and boastfulness after the character barged into the chatroom.

To his credit, as the play progressed, Dresson’s John imperceptibly changed to a man brimming with compassion, concentration, and caution. Specifically, over the course of the play, John changed from an arrogant intruder to a cautious and compassionate caregiver to Odessa. Unfortunately, she relapses and becomes gravely ill. As it turns out, she listed John as her emergency contact should something happen to her. And, so, he comes to care for her.

It might seem implausible that Odessa would come to think so much about John. On the other hand, it illustrates the power of human connection, even online.

Speaking of Odessa, who goes by the alias “Haikumom,” Arlette del Toro lent the character a compassionate and vibrant demeanor. This made it easy to understand why addicts would want to remain on her chatroom. We come to empathize with del Toro’s Odessa as a well-meaning person who did not neglect her daughter on purpose, but as someone struggling mightily with an addiction.

Other sympathetic characters include “Orangutan,” aka Madeleine Mays. Tyler Fitch was at their best when they injected the character with a fierce determination and inner strength.

As Elliot, Alex Joyel fared better. In particular, he believably revealed a panting, shaking, impulsive, troubled, and sometimes hot-tempered, yet tortured man. Altogether, the performer conveyed strong emotions without seeming to force them, and his words sounded spontaneous.

The actors, under Elizabeth Price’s sensitive direction, performed on a spacious, multi-level set. The uncredited set design accommodated multiple locations while allowing for smooth transitions between scenes. The set did not call attention to itself, allowing the focus to be on the characters. The actors who play the users, following the playwright’s wish, do not stare at screens or cell phones. Instead, without looking at each other, they occupy different parts of the stage and talk to one another, as though they were online.

Elliot is a fighter. For instance, during one scene, he boxes with real gloves, symbolically fighting the phantom that has taken control of his life. At one point, the ghost, as though by magic, makes Elliot fall.

The characters in Water by the Spoonful may experience setbacks. But you have to admire their resilience – they “get up” after falling, serving as role models for each of us.