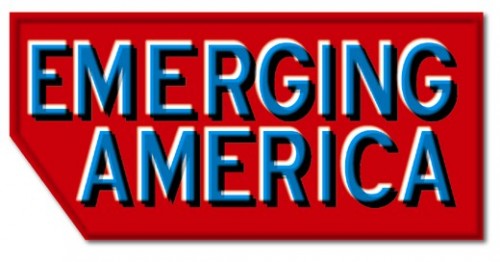 From June 21 through 24, The Emerging America Festival will bring together some of the country’s most promising performers, writers, companies, and directors for a weekend filled with energy, imagination, creativity, and drama.

Emerging America spans Boston and Cambridge with events at all three artistic homes throughout the four-day Festival: A.R.T.’s OBERON, 2 Arrow St. Cambridge MA; the Huntington’s Calderwood Pavilion at the BCA, 527 Tremont Street, Boston; and the ICA at 100 Northern Avenue, Boston.

Weekend passes and individual tickets are now on sale. Ticket prices range from $5 to $25, and packages are available for special discounts and experiences across all three institutions.  For more details and for tickets visit http://www.emergingamericafestival.org.

This year's events will include:

By Gilbert and Sullivan, Directed by Sean Graney, Performed by The Hypocrites

Bringing their sold-out production from their native Chicago, The Hypocrites treat this hilarious musical in an entirely thrilling new way. Treat yourself to an eighty-minute exotic excursion featuring bathing beauties, philosophizing pirates, and grown men in remarkably short shorts! Warning: If you want boring, stay away; this experience will cause immense joy and the compulsion to spontaneously sing along. Come ashore with the “Very Model of A Modern Major General,” the Pirate King, and a banjo-picking Mabel. The show features beach balls, sunshine (the artificial kind), and tons of fun music.

Winner of the 2011 Elliot Norton Award for Best New Script and the 2012 IRNE Award for Best New Play. A starlet and her paramour, a senator’s wife and a prostitute, a mother of an abducted child, a bus driver, a taxi dispatcher, a desperate lover — these lives and others intersect in and around the Hotel Nepenthe as mysteries multiply and deepen, and interactions between strangers reveal an unsettling interconnectedness among all. The 2011 Elliot Norton Award-winning ensemble of Marianna Bassham, Daniel Berger-Jones, John Kuntz, and Georgia Lyman reunites for six performances only.

The celebrated performer Steve Cuiffo has immersed himself in the work of Lenny Bruce, delivering sublime, hyper-real, verbatim resurrections of the great American thinker’s monologues. The New York Times has declared, “Lenny Bruce is brought back from the dead in the form of Mr. Cuiffo,” who will perform a compilation of Bruce “bits” on still-hot topics, including organized religion, race, illegal and prescription drugs, sexual mores, obscenity, and the Constitution. It’s fifty years later, but Bruce’s often prophetic, freedom-loving skewering of American culture is as dazzling, hilarious and insightful as ever.

Friday, June 22 from 9:30pm to 1am – The Institute of Contemporary Art/Boston

What if your phone could let you in on the secret stories of strangers in the crowd? Immersive theater artist Mikhael Tara Garver (Fornicated From the Beatles, and the sold-out Experimen tAmerica 2010)will collaborate with over fifty writers, dancers, actors, and performers to bring you an evening filled to the brim with music, dancing, and hidden discoveries with unexpected encounters waiting in your pocket and around every corner at the ICA. It’s a dance party, it’s a performance, it’s an experience: it’s Experiment America.

THE FRIENDS OF EDDIE COYLE

By Stickball Productions, Based on the novel by George V. Higgins, Adapted for the stage by Bill Doncaster, Directed by Maria Silvaggi

The godfather of badass Boston crime stories comes to life in this stage adaptation of George V. Higgins’ The Friends of Eddie Coyle.  Set in the winter of ’69, Eddie Coyle is a bottom of the barrel hood tried to stay alive and out of jail among his “friends” – bank robbers, student radicals, bartenders, hit men, cops and informants.  The Friends of Eddie Coyle has been called the best crime novel ever written and now Higgins’ dialogue comes alive through live theater in a return to OBERON following its sold out winter run.

Mingle with festival-goers and artists and discuss the festival's offerings. Enjoy surprising, unconventional performances by local artists that will intrigue, fascinate, and amuse.

Celebrate the end of the weekend with Festival artists, live performance, conversation and fun.  Special musical guests to be announced!

A new batch of dynamic free downloads follow the dozens of audio events offered in 2011 and 2010. The Huntington Theatre Company shares site-specific audioplays by Huntington Playwriting Fellows and inspired by locations surrounding each Emerging America partner venue. The A.R.T. and ICA offer podcasts and walking tours from local artists and festival participants. Listen in and explore, investigate, and imagine the lives of places in Boston and Cambridge. More info at http://www.emergingamericafestival.org.

Come together at the Festival Tent, just outside OBERON at the A.R.T., where festival-goers can grab a drink and meet artists and audiences from all over Cambridge, Boston, and the nation.

Steve Cuiffo (actor/creator – Steve Cuiffo is Lenny Bruce) is an actor and magician who creates solo shows and works collaboratively with a range of artists. He has created original works such as Steve Cuiffo Is Lenny Bruce and The Amazing Russello Magic Hour. His performing credits include The Wooster Group’s North Atlantic,Radiohole’s Fluke, The Foundry Theatre’s Major Bang and The Roaring Girle, Donald Byrd’s Byrdlesque, and Tea Alagic’s The Filament Cycle.  Steve’s new show, ELEPHANT ROOM, a collaboration with Geoff Sobelle and Trey Lyford, recently premiered in at the Philadelphia Live Arts Festival and Arena Stage in Washington, D.C.

Bill Doncaster (Playwright – The Friends of Eddie Coyle) is a former reporter, former Mayor’s spokesman in Somerville who currently works at Lesley University. His short and one act plays have been produced in Boston, Chicago, New York, Florida and Louisiana, and he's a two-time winner of theBest Play award from Playwright's Platform. He attended North Adams State College before they changed the name, earned his BFA from Emerson College, and is currently working on his MFA in Creative Writing at Lesley University.  He’s a member of the Dramatists Guild.

Sean Graney (Director – Pirates of Penzance) is the Founding Director of The Hypocrites, a company where he was the Artistic Director for 14 years. Sean has directed over 30 productions for The Hypocrites since 1997. He was a participant in the NEA/TCG Career Development Program for Directors. He has won two Joseph Jefferson Citation awards for the direction of Equus and Machinal. He has directed Edward II (Chicago Shakespeare), The Hairy Ape (EugeneO’Neill Festival at Goodman Theatre), The Comedy of Errors, TheMystery of Irma Vep and What the Butler Saw (Court Theatre), The Complete Works of William Shakespeare (abridged) and Yankee Tavern (Milwaukee Rep), The Elephant Man (Steppenwolf for Young Audiences), and The Hundred Dresses, Hana’s Suitcase and Honus and Me (Chicago Children’s Theatre). He also has adapted several plays, most recently Sophocles: Seven Sicknesses, an adaptation of all seven surviving texts of Sophocles.

Maria Silvaggi (Director – The Friends of Eddie Coyle) has been involved in some form of theater since she was 10 years old and she has spent the last 30 years working in all aspects of theater in Boston and New York.  She is a founding member of Stickball Productions.  She majored in theater at North Adams State College and did graduate work at Kent State

The Hypocrites (Originating producers/cast of Pirates of Penzance)

Founded in 1997 by Artistic Director Sean Graney, The Hypocrites are recognized as groundbreakers in the city of Chicago. The company has grown significantly in the past few years, receiving acclaim for The Threepenny Opera at the Garage Space at Steppenwolf, The Hairy Ape produced in association with Goodman Theatre as part of its O’Neill Festival, Oedipus at The Building Stage, Cabaret presented at the DCA Storefront, and No Exit at the Athenaeum. The company’s smash-hit Chicago production of Our Town, directed by David Cromer, transferred in 2009 to Off-Broadway.

Stickball Productions, Inc., is a 501(c)(3) non-profit theater company dedicated to producing compelling stories through live action. They hope, most of all, to bring people back into the theater who perhaps haven't been in a while.   Movies and books are great -- they love ’em too -- but there's something about experiencing the story live that makes for a great night out.

David R. Gammons (Director/Scenic and Costume Design – The Hotel Nepenthe) previously directed and designed The Hotel Nepenthe (2011 Elliot Norton Award for Outstanding Ensemble) for Actors’ Shakespeare Project, where he has also directed and/or designed The Duchess of Malfi, The Tempest, Titus Andronicus (2007 Elliot Norton Award for Outstanding Director), and King Lear. Other directing credits include projects at SpeakEasy Stage Company, Suffolk University’s Modern Theatre, Boston Playwrights Theatre, New Repertory Theatre, American Repertory Theater, Brandeis Theatre Company, and The Boston Conservatory. Mr. Gammons is a graduate of both the directing program at the A.R.T. Institute for Advanced Theatre Training, and the Visual and Environmental Studies department of Harvard University. He has been director of the theater program at Concord Academy since 2000, where he has directed productions bySophocles, Shakespeare, Chekhov, Pirandello, Brecht, and Suzan-Lori Parks, the first high school production of The Laramie Project in February 2001, and eleven original experimental world premieres. davidrgammons.com.

John Kuntz (Playwright/Actor- The Hotel Nepenthe) is a founding member of Actors’ Shakespeare Project where he has appeared in The Hotel Nepenthe (2011 Elliot Norton Award winner for Best Ensemble & Best New Script, 2011 IRNE Award for Best New Play), and ten Shakespeare productions. At the Huntington, he appeared in Betty’s Summer Vacation and was a member of the inaugural cohort of Huntington Playwriting Fellows. He has also appeared in productions at the American Repertory Theater, Ohio Theatre, Urban Stages, Company One, New Repertory Theatre, The Nora Theatre Company, and The Lyric Stage Company. He is the author of 14 full-length plays including The Superheroine Monologues (co-written with Rick Park), Sing Me to Sleep, Freaks, Starfuckers (Elliot Norton and New York International Fringe Festival Awards), After School Special, My Life with the Kringle Kult, Miss Price, Glitterati, Emerald City, JasperLake (Michael Kanin andPaula Vogel National Playwriting Awards), Jump/Rope, Actorz with a Z, and his solo show, The Salt Girl(2009 Elliot Norton Award for Best New Play

Founded in 2004, Actors’ Shakespeare Project has produced more than 30 plays at 15 unconventional, “found” venues throughout Greater Boston. At the core of ASP’s work is the Resident Acting Company, a company of actors and teaching artists who approach each play as the centerpiece of a larger community project comprised of a rich set of events, residencies, and outreach programs for both adults and youth that crack the play open in visceral and personal ways and make connections between the plays and our lives here and now.

Paradise Lost is a collaborative company that welcomes artists from all walks of life and values dynamics and diversity in our both our movement and our community. All of their art is made either partially or completely from improvisational dance and organic movement, rooted in Contact Improv. They focus on the positivity and power dance provides to change our lives as much as it does transform our bodies. Let’s get lost.

Tom Bardwell is an Ohio native sketching into the world Nicholle Pride, the drag persona he created in 1996. His pedagogical approach is one of deep physicality and sourcing moments of transcendent live performance.

Jan Paul Kaim started playing the piano since he was about the same height as the instrument and soon found that writing music was his true musical passion. He now composes for film and broadcast, writes show tunes, and takes part in scores of other musical works.

Bad Habit Productions, Inc. is part of the thriving Fringe Theatre community dedicated to producing unique theatrical experiences within greater Boston. BHP produces three main stage productions each season, as well as a monthly night of improv and comedy, “Comedy on Tap,” at the Burren in Davis Square.