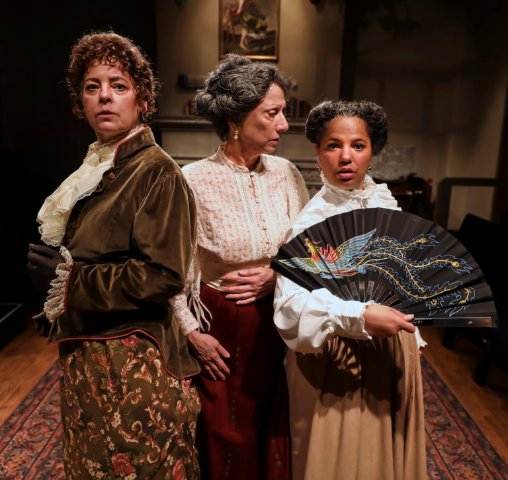 Plus ça change, plus c’est la même chose. At one level, Central Works’ world premiere of Patricia Milton’s The Victorian Ladies’ Detective Collective is a brisk and bright crime procedural. At another level, it is a feminist cry. Taking place in London at the end of the 19th century, we are reminded that the misogynism of that day has been diminished but not extinguished.

Reminiscent of the horror of the unsolved murders by Jack the Ripper, young actresses are being butchered on the dark and foggy back streets of London. Widow Valeria owns a boarding house in Battersea, walking distance to the theater district. Young actresses reside at the lodgings. Valeria is joined by her sister Loveday, a former actress herself.

As the toll of victims rises, Loveday observes that the constabulary has been unsuccessful in tracking down the killer and insists that women have some advantages in investigating the assaults. She recruits the reluctant Valeria to the cause. Add a young, low-on-funds and long-on-pluck, American actress to the mix, and three disparate women are poised to solve the case – if they can get support and permission from male gatekeepers, a common roadblock that women face.

It is on this point that the matter of misogyny hinges. Two of the three male characters in the play weigh heavily as obstacles to the women’s participation in the investigation. Milton can be forgiven for making these male characters despicable and unidimensional – at least to the extent that we get to know them through their brief appearances in a play. In this case, it is in keeping with the needs of the plot.

But the playwright’s contention that the broader society, as represented by the constabulary, are not motivated to solve the grisly crimes because the crimes “uphold and reinforce a public order that devalues and dismisses women” seems to veer in the direction of man hating. True, the acting profession was not well respected; actresses had to risk being on the streets late after performances; and some observers looked for reasons to vilify the victim. But to indict the whole of society as indifferent to a pathological murderer among them seems extreme, especially as society in many ways paid the price of the crime.

In the play, the women’s first antagonist is Constable Henry Crane, who by today’s standards is benighted, harboring self-serving, denigrating attitudes about women. His resistance to women investigators derives from his beliefs that women should be consigned to their traditional role activities and the prejudice that they lack the mental acuity necessary for the task.

The other, Jasper Warren-Wind, represents a more insidious type – a Harvey Weinstein of his time. Jasper is on the board of the Battersea vigilantes, comprised of community leaders whose businesses have been adversely effected from the fear engendered by the murders. He produces plays and has seen box office proceeds dwindle as prospective customers fear to visit the area. He is a man who uses his power to take advantage of women in private encounters, knowing that in any public hearing, his word would be taken over that of a disreputable actress. And, incidentally, he has a past with Loveday. Will he or the constable allow the women to help solve the crimes?

Having the feel of a British mystery on PBS, the story engages and entertains with elements of suspense and revelation as the characters’ past histories and present secrets unfold. A weakness in the plot, however, is that the process of solving the mystery is rather simplistic, and the solution hinges on a fact that the audience doesn’t have at its disposal.

The quest to find the perpetrator is driven by the persistence of Loveday, who constantly pushes the envelope. Portrayed assertively by Stacy Ross, she is self-indulgent, restless, and above all, a feminist before her time. Jan Zvaifler plays her sister Valeria with studied and effective understatement. Cautious and skeptical, she doesn’t share Loveday’s conviction. They even disagree on the killer’s motive. Loveday believes that the killer can’t stand independent women, while Valeria thinks he simply kills for savage pleasure.

Chelsea Bearce revels as the cheery and clever Southern belle Katie. Late on her rent to Valeria, she will do whatever necessary to keep a roof over her head. Alan Coyne plays all three male parts. With changes of costume and tweaks elsewhere, he convincingly differentiates the three.

In sum, a clever script with suspense and social consideration delivered by four fine actors (who do stumble their dialogue a bit) yields an engrossing time at the theater.  Period costumes by Tammy Berlin and furnishings by Debbie Shelley provide an authentic look in the Gary Graves directed piece.