Light Up the Sky Beacons Us to Theatrical Laughs

Comedic View of Putting On A Show 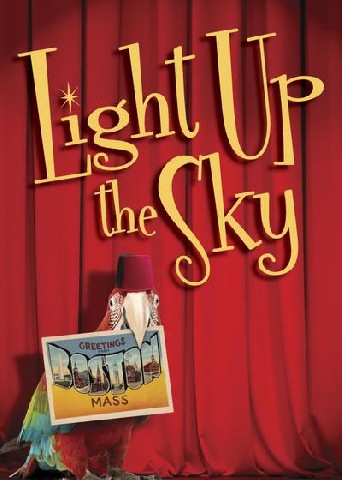 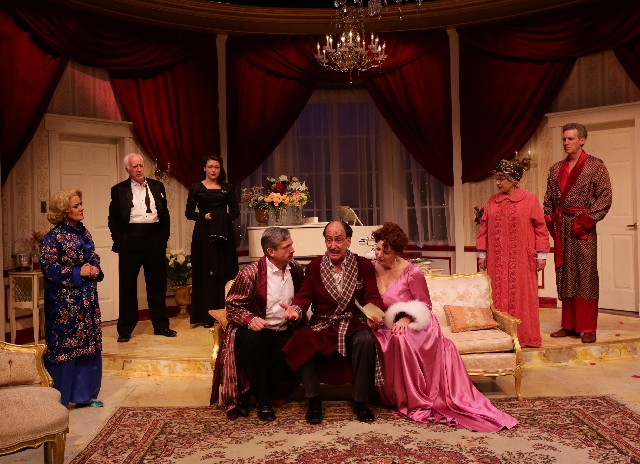 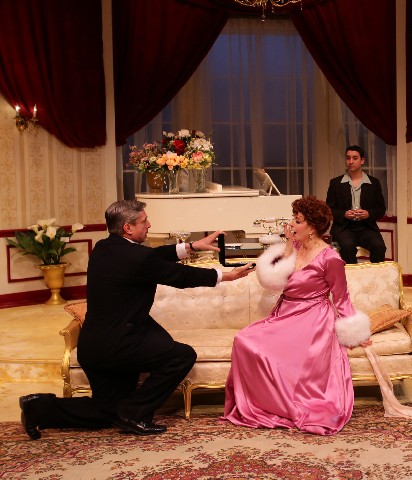 Watching how the sausages are made can be either fascinating or stomach-turning. Applying this principle to how a theatrical production is made, comedy is the necessary seasoning to make the experience entertaining and tasty. And this is what the Lyric Stage Company of Boston has applied in heavy but bitable doses in Moss Hart's Light of the Sky.
With the exception of a few dated phrases and colloquialisms, Playwright Hart's comedy plays almost as well today as it did 65 or so years ago. Of course, wonderful direction by Scott Edmiston of a terrific, talented cast makes this theatrical comedy a warmly funny experience. Corny or calculated, caustic or constipated, each actor fits their individual character as if shoehorned into them.
Set in the Ritz-Carlton Boston in the late 1940s, Light Up the Sky is a backstage comedy about eccentric, colorful artists and producers involved in breathing life into a Broadway-bound play. Here we witness the frightening moments of anticipation and terror just before an audience and critics see the opening performance.
We view the grand, overly theatrical leading lady, the hopeful wet-behind-the-ears young playwright, the high-strung director, the boorish producer and his comical wife along with a monster mother in this affectionate, hilarious look at the creative process of what used to be referred to as the  "legitimate" theatre.
The large but deft cast is made up of sensational mature (certainly not old!) locally beloved professionals and clearly talented younger performers. Of particular note are Will LeBow, Will McGarrahan, Paula Plum, Kathy St. George, Richard Snee and Bobbie Steinbach. The always skillful LeBow's oily producer appears to want to chew the scenery just as an appetizer. And Will McGarrahan's sobbing, haughty director seems a terrific morphing of actor and role. Paula Plum is a diva incarnate, while Richard Snee is the avuncular gentleman playwright "friend of the theatrical family."
Kathy St. George and Bobbie Steinbach often simply steal the show. This theatrical theft is particular difficult considering how strongly LeBow, McGarrahan and Plum seem to lock up the stage whenever they perform. In other words, their performances demonstrate subtle craft and skill.
Both St. George and Stainbach play ladies a bit past their physical prime but that have not lost a tick off their humor clock. Their always funny gin rummy playing and snarky asides add color and depth to the the lightness of the comedy.
In addition, fine performances by Jordan Clark as Plum's Livinston's ghost writer and Alejandro Simones' playwright Peter Sloan underscore the sparkling Moss Hart dialogue. Wonderfully, Ms. Clark's facial expressions and movements say much more than most of her words.
Director Scott Edmiston orchestrates the stage brilliantly. He makes all 10 characters seem to dance to and fro, with various twists and turns, that deftly make the audience continually laugh and often chortle.
The stagecraft of the play is quite terrific. Janie E. Howland's scenic design is great. Gail Astrid Buckley's costume design was first night right. Karen Perlow's lighting design makes the narrative with its various verbal bombardments come alive.
In terms of actually creating a hit, theatre has been always a bit of a crapshoot. Not only does the script have to be just right, but the actors, directors and production staging have to all work almost seamlessly together. Then there are the unknowns of audiences and critics. When it works, it is theatre magic. Moss Hart's Light Up the Sky illustrates this with humor and fun.
Perhaps, theatre may just be a metaphor for life? If so, here it is downright entertaining. With a wonderful cast, direction and setting, Lyric Stage's Light Up the Sky is an entertaining way to spend some Springtime smiling and laughing in the dark.
Back to Theatre Section Home