Juvenile Has First One Man Show 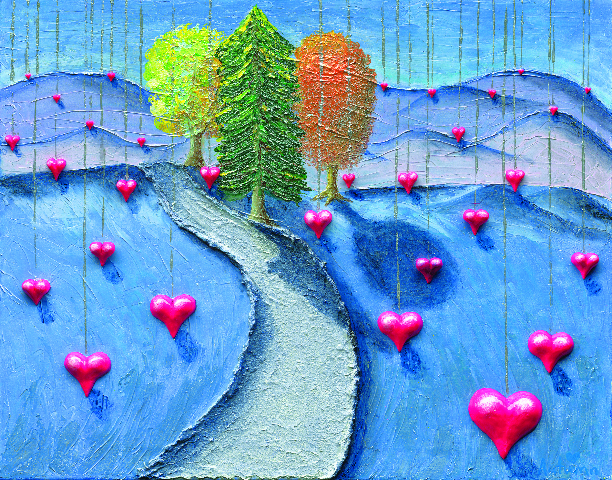 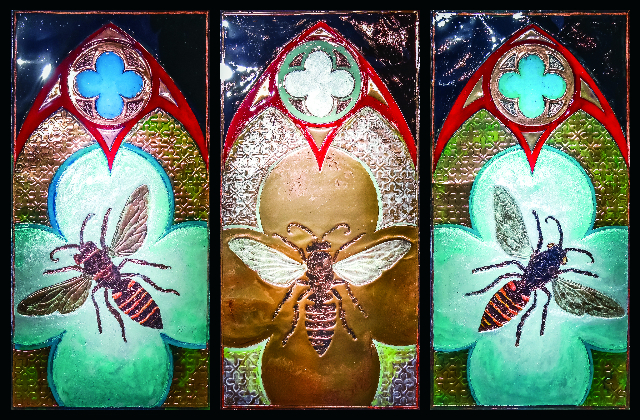 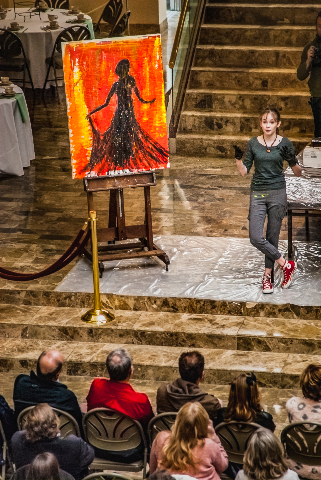 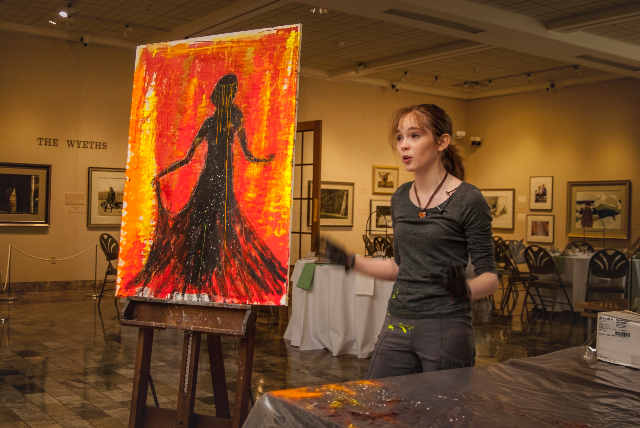 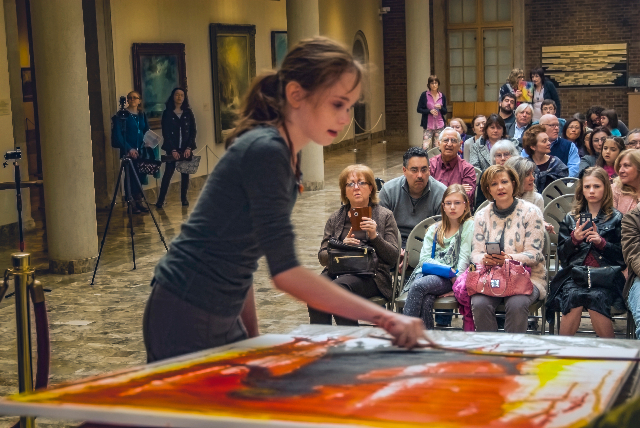 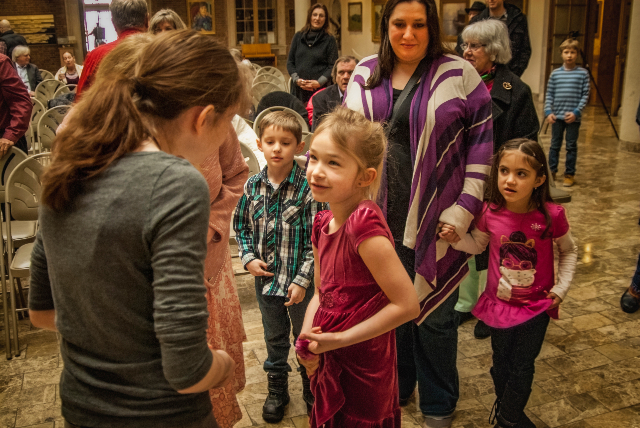 Autumn de Forest: The Tradition Continues, which opened at the Butler Institute of American Art’s Mesaros Gallery in Youngstown, Ohio, on April 10, is noteworthy because the painter, now fourteen, has been painting since she was five. She is also part of a family tree that includes the brothers Robert Weeks de Forest (1848-1931), who was president of the Metropolitan Museum of Art and oversaw the establishment of the American Wing,  and Lockwood de Forest (1850-1932), a painter and a designer in the Arts and Crafts movement who worked with Louis Comfort Tiffany; George de Forest Brush (1855-1941), famous for his depictions of western American Indians and connected to the Remington School; and Roy de Forest (1930-2007), one of the proponents of the California Funk art movement.

The exhibition opened with a weekend of events celebrating Autumn and her work, beginning with a painting demonstration to view the young artist’s creative process. As she approached her canvas with a large black oil stick, she began, “Let me tell you my story. I started painting in my late 5s…” She walked into the garage where her father was working and asked if she could paint something for fun. He gave her a paintbrush, a piece of plywood and some stain. Her father, Doug de Forest, likened it to a Rothko. “Of course,” Autumn told her audience at the Butler, “I didn’t know who Rothko was at the time. I just loved big gestures and big brush strokes.”

Autumn said that by the time she was seven, she wanted to exhibit her paintings. Her parents rented a space at the 2009 Boulder City Hospital Foundation’s Art in the Park event. “I had about 40 paintings collected, and I showed 15. It was at that time that I knew that painting was my passion. I had a new passion, giving it a meaning,” she told us. Autumn won an honorable mention at the Boulder City fundraiser and about a month later, a best of show at another Art in the Park event. She explained that from that point on she has donated paintings to charity events, trying “to do anything I could to help” people in need. She is poised and comfortable with her audience, a practiced speaker who has appeared on the Discovery Channel and the Today Show and clearly connected with adults and children alike.

Autumn demonstrated a technique she calls “pull painting.” Directly onto the length of the canvas and over the somewhat figurative black oil stick application, she squeezed thick lines of acrylic in hues of orange, red and yellow. To this she placed a small diameter dowel perpendicular to the lines of paint and dragged it across the canvas in a sawing motion. After rubbing in more oil stick (the oil resists the watery paints) to create the effect of a long pleated dress and two willowy arms, she squeezed out more paint to which she applied a few more zigzags of the dowel, then finished the piece by dripping a thinned medium from a squeeze bottle, dexterously working as she spoke. The result was a textured background, acting as a sort of aura around a full-length, gowned female figure in silhouette.

Among the questions that followed, she was asked about other techniques she has created. Autumn described what she calls “wind painting,” which involves using an air compressor to spread paint squeezed onto the canvas. These abstracts, like “Gold Coral (Tiny Worlds),” “Gold Coral (Reaching Out)” and “Gold Coral (Magenta)” (all 2015), have an almost ethereal quality.

One person asked if she ever uses brushes. “Sure, I use brushes, but the thing about brushes is that they only have one style.” Other painters might protest that brushwork – impasto, scrumbling, stippling, etc. – is an individual aesthetic, identifiable in much the same way we consider handwriting unique, though Autumn seems to prefer a broader sweep than perhaps a brush can afford.

Autumn has returned to the coral motif over time, as well as to starburst figures, butterflies, concentric hearts, and silhouetted herons and horses, and many of the pieces in the current exhibition revisit earlier motifs and images. The titles, too – as they appear on the gallery labels, though not in the accompanying catalog – suggest earlier visual territory. Most of the work in the Butler exhibition is dated 2015 with titles like “Silver Skull Ver. II, #1,” “Dripping Hearts Ver. VI #1,” “Dripping Hearts Ver. XI #1,” leaving the impression that, e.g., “Dripping Hearts Ver. XI, #1” is the eleventh iteration of the dripping hearts motif, and that we can expect the series to continue with #2, #3, #4 etc.

Autumn has explored the dripping heart motif as though interpreting the inner landscape of a dream. The hearts have metamorphosed over the years from floating almost balloon-like across a landscape – always bisected by a road – to three-dimensional acrylic hearts applied to the canvas. The heart is the central motif in Autumn’s visual vocabulary figuring as the dominant element of a painting or occurring amidst other imagery, but always appearing above or beside her signature.

Other paintings, like “Drive” (2015) and “Silver Skull” (2015), are unabashedly derivative (of Ed Ruscha and Georgia O’Keefe respectively), another leitmotif of Autumn’s oeuvre, which reflects the scope of the Abstract Impressionists and Pop artists she has surveyed, so that looking across the gallery at the Butler one sees a mélange of 20th century influences.

“Honey Bees” is an exploration of new terrain, a triptych composed of tempera on copper relief with engraving on wood panel. Each panel contains a bee within a quatrefoil framework. The quatrefoil is repeated at the top beneath a pointed arch equally evocative of the beehive and of the Gothic equilateral arch. The bee has been a sacred insect from the Mayans to pre-Hellenic Greeks whose bee goddesses bestowed the gift of prophecy on Apollo.

Autumn’s parents have supplied her with high-quality artists’ materials and a veritable library of art books, but they emphasize that she has sleepovers, goes to the mall, and is a teen just like any other 14-year-old. Autumn’s parents have come to believe that to provide her any formal training would be to destroy her gift, and Park West Gallery owner Albert Scaglione preempted any concerns, telling visitors to the gallery tour, “Autumn is a great sponge. She has connections with” many among his stable of artists. “After she’s done with [her full course of homeschooling], she’ll be working with an international group of highly renowned artists.”

I appreciate a plaintive point Doug de Forest made to Erika Pope of Vegas Seven in 2010. He said he and Katherine believe “Autumn’s success lies within reach of any child whose parents are as resourceful and passionate as they are. ‘Wouldn’t it be amazing if we gave more children the tools to maximize their creative potential?’” Yes, wouldn’t it be amazing. Especially in an era where the arts and humanities have been sacked at every level of education.

Brooklyn-based writer Hilarie Sheets’s essay for the exhibition catalog describes Autumn’s approach as homage. Autumn has clearly looked at an abundance of art in a bounty of books and in a wealth of museums, and she is obviously fascinated with interpreting what she sees. Certainly Autumn has tried her hand at some of the most iconic art historical images of the 20th century American canon. Her “Barbie Marilyn” (age 8) substitutes Barbie for Warhol’s “Marilyn”; her “American Graphic” (age 9) substitutes a crayon for Grant Wood’s pitchfork; her “GIRL” (age 10) substitutes for Robert Indiana’s “LOVE”; her “Ceci n’est pas une rose.” (age 13) substitutes for Rene Magritte’s “Ceci n’est pas une pipe.” In a series she calls “Little Girl, Big World,” we see her figure in the museum gallery in front of iconic canvases, like Jackson Pollock’s or Jasper Johns’s.

Autumn says, “One of my biggest fears is becoming an abstract artist or a pop artist or a German Expressionist artist or a Cubist painter. I don’t want to be any one of those. I want to do all of them.” In doing them all, she is evolving in the direction of her own unique style and vision, poised to make her mark.