The Gospel According to Thomas Jefferson, Charles Dickens and Count Leo Tolstoy: Discord 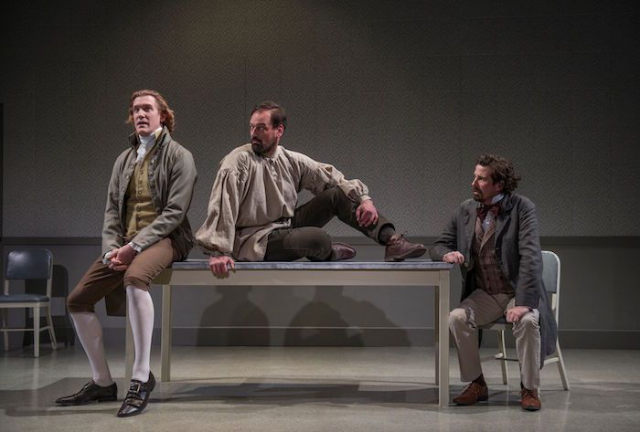 There’s just a rectangular metal table, two chairs—and intelligent discussion. An electronic screen high up on the back wall blinks us through the 13 scenes. One door. No color, no ornament.

You hear heartbeats. Three men enter, one at a time. Each one looks around as if to figure where he is or maybe why he’s there, then tries to leave, but the door is locked. First an 18th century Virginia gentleman (Nathan Hosner), then a 19th century London celebrity (Jeff Parker) and finally, a madman dressed like a Russian peasant (Mark Montgomery).

Those are all the ingredients in Northlight Theatre’s new production of The Gospel According to Thomas Jefferson, Charles Dickens and Count Leo Tolstoy: Discord, written by Scott Carter. Kimberly Senior’s smooth direction succeeds in making this pastiche of one-liners and existential debate into a smart evening of theater.

Trying to figure out why they are there, each one admits he arrived at the door just after his death. Dickens asks, “The eternal question: What happens when we die? Turns out you just go to a room. And not even a room of one’s own. A shared room. Like a boarding house. Am I to be joined in eternity by others? Shall I soon be crammed in here like a sardine in a tin? Do I deserve that fate?”

When they realize that their fourth wall is a mirror, each one looks at his reflection approvingly. Yes, this is me at the height of my powers. They don’t know each other. Jefferson never heard of either Dickens or Tolstoy. Jefferson and Dickens didn’t know there was once a great novelist named Tolstoy.

Carter restrains himself from taking advantage of lot of obvious anachronisms. However, Thomas Jefferson marveling at a fountain pen that requires no quill or inkpot is charmingly forgivable.

Is this some existential variation on Sartre’s No Exit, in which “hell is other people”? Or a variation on Stoppard’s brilliant Travesties, where three men of genius (James Joyce, Tristan Tzara and Vladimir Lenin) converge on Zurich in 1917? Just a little.

\The three men of history puzzle over the similarities they may have that caused fate (or someone) to bring them together in the afterlife. They didn’t share the same occupation. Or wealth, education or religion. Finally they realize that each has composed his own version of the gospels, the four books that begin the New Testament. Jefferson says, “We were three eminent men. We all compiled a gospel. Might we be gathered to forge our three texts into one?”

The previously locked drawer in the metal table opens and they are supplied with a copy of the King James Bible, the aforementioned fountain pen and a journal. Each one in turn plays amanuensis as they take turns elaborating upon their own version of the gospels, word by word, trying to come to agreement on each. But agreement doesn’t come easily. Jefferson insists on Reason, Tolstoy will stand for nothing except Spirit, and Dickens emphasizes Word or language. They also have problems agreeing on miracles, let alone the resurrection.

After quiet moments of reflection upon the gospels, they end up confronting each other with their own shameful acts. Dickens, who portrayed himself as England’s greatest family man, was unfaithful to his wife. Jefferson, the champion of liberty, owned hundreds of slaves and begot children with one of them. Tolstoy was a “dirty old fornicator” who threw off his title and wealth, lived with his peasants but never emancipated them.

Discord may be an intellectual game, but it’s a delightful and thought-provoking one. Its serious overtones and philosophical undercurrents make it a worthwhile 90 minutes of your time and a trip to Skokie.

The three actors excel at their roles. Hosner’s soft Virginia accent and dignified manner make him a convincing founding father, while Parker’s lively manner is appropriate for the Dickens who was an actor and celebrity as well as a prolific novelist. Montgomery, known for playing great men such as Agamemnon in Court Theatre’s current trilogy, plays Tolstoy with a fierce look in his eyes and a combative manner.

Scott Carter is executive producer for HBO’s “Real Time With Bill Maher” and previously produced the first 1100 episodes of Maher’s “Politically Incorrect.” He has written two full-length monologues. Discord premiered in 2014 in Los Angeles at the Geffen Playhouse and the NoHo Arts Center.

The Gospel According to Thomas Jefferson, Charles Dickens and Count Leo Tolstoy: Discord continues at Northlight Theatre, at the North Shore Center for the Performing Arts, 9501 Skokie Blvd., Skokie, through June 12. Performances are Tuesday-Sunday. Tickets are $25-79 and can be bought online or by calling 847-673-6300.