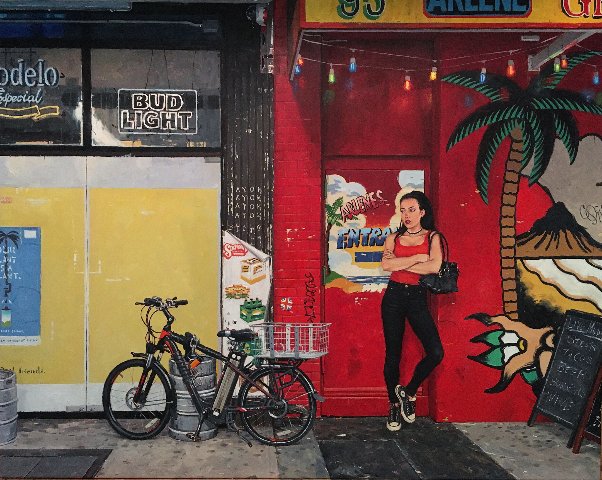 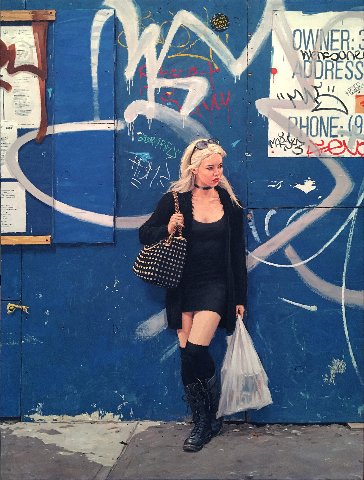 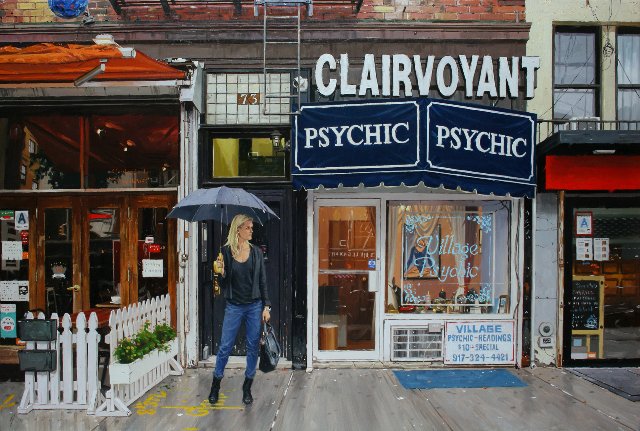 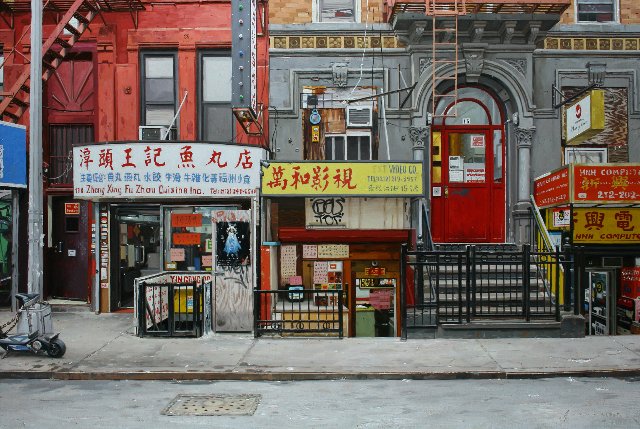 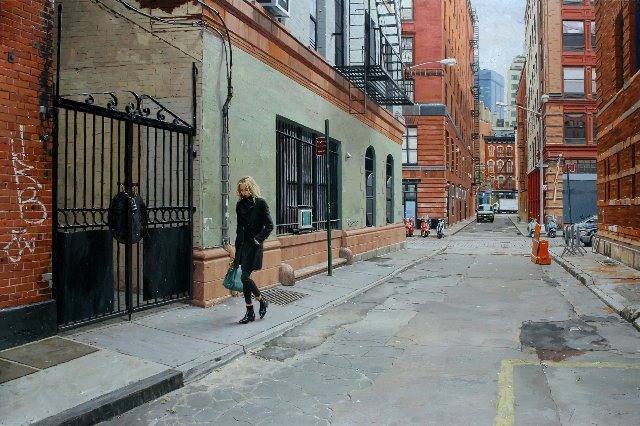 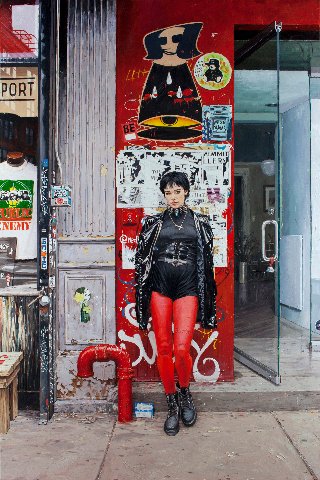 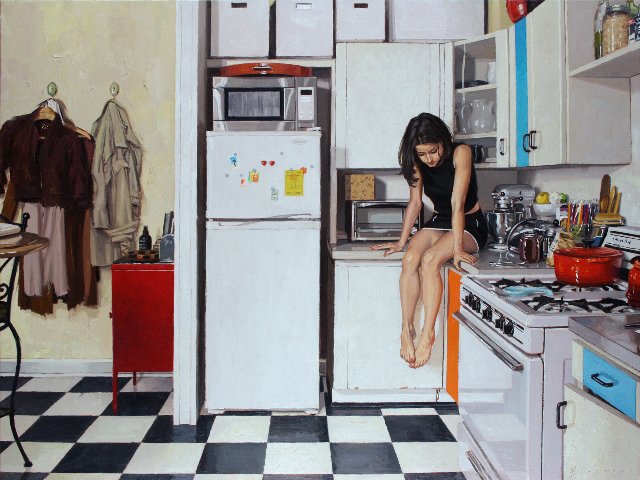 Vincent Giarrano’s paintings are like memories of the faintly familiar. Each is an ordinary scene in an urban landscape…private and enigmatic moments. The artist’s compositions seem almost cinematic, with an unfolding narrative suspended on a single frame of film. Giarrano is a storyteller much like a movie or stage director who creates a mood with dramatic lighting, visual props and cast members bringing a script to life.
-John Kemp

There is no question regarding the skill of the artist. Vincent Giarrano's work has visceral impact for the meticulous verisimilitude of his mastery of photo realism.

From gumball machines, to fanatically detailed cityscapes, renderings of neon signs, the chrome of choppers, and models in lingerie have been art world tropes since the 1960s. The realism movement paralleled but was eclipsed by Pop.

They emerged during the tapering off of abstract expressionism when there were many aspects of a return to the figure. There was an attempt to bridge the gap between pre and post war figurative expressionism.

There was another tangent and initial dead end when Phillip Guston abandoned a secure status as an abstract expressionist to reinvent himself as an art world pariah painting cartoonish images of Ku Klux Klan hooded monsters.

The Museum of Fine Arts Boston is currently attempting to unpack that critical conundrum. Was Guston the best or worst artist of his generation?

Since the 1960s a legion of realists have had substantial careers but only a handful have caught the brass ring of critical success in the outré mainstream art world. For most of these painters there is a decent retail market but zilch on the secondary or reseale market.

One work by Andy Warhol “Shot Sage Blue Marilyn” (1964), sold recently for $195 million, is worth works by 195 notable realists. If, perchance, their works sell for six figures. To be sure there are those artists. They breathe the thin air, however,  because the work has that je ne sais pas plus ultra.

Understandably, gallerists are willing to show and represent artists like Giarrano because their appeal is excessive and self evident. For the average viewer and collector the merit of the work is palpable. But it accrues for the collector few kudos for risk taking and possessing a “good eye.” Acquiring the work is more a signifier of bourgeois taste than coveted status symbol.

The work begs the question of the quotidian striving for the sublime. To command respect and admiration there must be something more than technique. The work must have heart and soul beyond observation and minute rendering. .

Look long and hard at a work by Giarrano and one come’s up empty.

We find a young woman propped against a wall in “Outside Arlene’s.” She has, shall we say, attitude, in a street sense. She is standing outside a bar next to a bicycle. What’s with the bike other than something to render and perhaps dazzle the viewer? I haven’t a clue what she’s about nor do I particularly care.

The painting “Clairvoyant” is a tad more complex. There is a double sign “Pshychic” projecting in a V formation from the front of a storefront. The lady in question holds an umbrella. Has this rainy day fashionista emerged from the shop? Is she hailing a cab having spun the bottle? This is the "cinematic" element that Kemp references. Compared to the establishing shots of Damien Loeb, however, Giarrano's depicts a B-movie.

We have another young woman in “Lauren and Grafitti.” Her black outfit, short skirt, jacket, boots and high stockings contracts with blonde hair and soft pale skin. The young beauty is accessorized with a black choker and sunglasses forming an ersatz tiara for an urban princess. She has a studded large bag over a shoulder and is holding a plastic shopping bag. Given her chic demeanor the graffiti is a non sequitur.

We seem better off when the frails take a powder. “Eldridge Street” is unpopulated and has a neo-Estes take on signage in Chinatown.

The model in “Disorder” is a bit more punk and edgy in red tights, butch boots and leather. Here the urban graffiti seems more connected. But the artist seems only to be interested in attractive young women, arguably, above his fantasy pay grade. Or that of the collector. Other than the look the women convey no life experience or character. They are strictly mistress or second wife material for the targeted arriviste collector. Think Hef or Bob Guccioni.

Let’s phase out with “Bora in the Kitchen” which is a hoot but a bit of a bore. Vermeer rendered sublime working girls in interiors. There is perhaps a hint of that as the artist gives us an upskirt view of a model sitting on the edge of the kitchen counter. Gairrano has gone all out rendering appliances. That includes the stove in perspective with a red enameled Dutch oven on top.

Perhaps to make a sauce. But this young lady hardly conveys any cooking skills. While the artist meticulously renders objects they are devoid of iconography.

These are clueless paintings that signify nothing. Unless young beautiful slum goddesses are your thing.