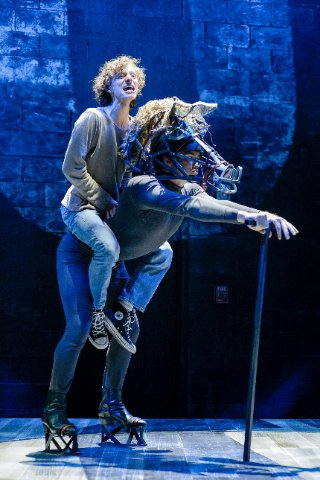 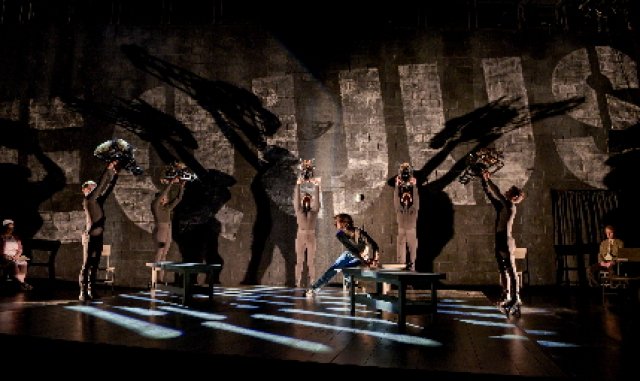 (Photo by Samantha Mighdoll) Alan Strang (Steven Maier) finds himself trapped in a stable where his imagined Horse-God being "Equus" might haunt him.

In the wake of recent school shootings, some undoubtedly and understandably harbor emotions too raw to ponder psychological motivations behind heinous crimes.

Yet, theater has a responsibility to examine issues ailing society. The art form can’t provide all the answers. But, plays and musicals can launch debate, thought and action.

With that said, a production of Peter Shaffer’s psychological drama Equus is overdue, with its exploration of a troubled youth and his unfathomable act.

Still, this highly-complex, unsettling, intense and suspenseful classic, written during the same year as its setting, all-too-painfully speaks to us loud and clear 45 years later. Indeed, the same day the production opened on Friday, a teenager allegedly killed 10 people and wounded 10 others in a shooting at Santa Fe High School in Texas.

Shaffer, who writes in a vividly descriptive style, sets Equus mainly in a psychiatric hospital. But he also offers a peek into a troubled home life.

That life belongs to 17-year-old Alan Strang, who has blinded several horses.

Many of us know what can happen when parents display apathy toward their children or set no boundaries. But what happens when caregivers stifle feelings and emotions? What if the adults drill thoughts and ideas into the young people’s impressionable minds?

Alan’s parents, Frank and Dora, are not unlike the adults in the rebellion-tinged musical Spring Awakening.

Indeed, in Equus, the devout Dora and the atheist Frank haven't acted like model parents. The conflicting messages they've sent their son, coupled with his own experiences, have led to a complex psychological web of confusion. It has fused sex and religion into a strange and unhealthy combination of equine worship, unusual sexual arousal, intense fear, vivid nightmares, guilt and paranoia. The lad cannot gallop from his demons, at the center of which is a feared horse-God-like figure dubbed “Equus,” a kind of Christ-like figure.

For Alan, the being, with "eyes like flames," exists in a horse residing at a stable, where the teen works part-time. One might attribute the root of his problems to two factors: There is his strange sexual attraction to and worship of the equestrian supreme being. He also harbors guilt over his feelings for a girl (a spirited, understanding Mallory Newbrough).

Does he belong in prison, as the stable owner believes? It’s something to ponder. This much is certain, though: The psychiatric hospital to which authorities have taken him resembles a correctional facility. Credit the technical team's superb work.

That includes scenic designer Anne Mundell's rendering of the hospital. She's designed it in such a drab and dreary manner that it’s hard to differentiate from a dungeon. The design fits the play’s dark themes and its cold, stark aura. The vivid depiction also includes “Equus," plastered in big, thick, white letters. It reinforces the enormity, haunting quality and power of the mysterious God-like figure in Alan’s mind.

However, Equus isn’t out to scare us for the sake of it. Neither, apparently, is director Lewis.

This production possesses the look and feel of a horror flick. But, Lewis places necessary emphasis on the myriad emotions Alan and his psychiatrist, Dr. Martin Dysart, experience.

Emphasis is also a hallmark of lighting designer Kirk Bookman’s work. It includes harsh, white hues that force us to pay attention to the characters, their emotions and the play’s themes. In addition, Bookman’s non-realistic, shadowy effects at times create what resemble jail bars on the floor.

Indeed, Alan and Dysart are “locked” in a “prison.” For the lad, his confusion and obsessions are confined in his ailing mind. Meanwhile, Dysart is stuck questioning his purpose in his life and at work.

In Stoppardian-like fashion, Shaffer’s play is chock-full of themes and ideas. They include: Life’s purpose, existentialism, the end-result and usefulness of psychiatric treatment, what constitutes normalcy, the place and value of passion, the subjectivity of religion and worship and the effects of repression.

Equus feels a bit overstuffed in places,although different themes seem more interconnected. Some folks may have difficulty following parts of the play without first reading it. Other audience members might find some scenes not as compelling as others.

As Alan undergoes treatment, he “relives” moments from his life that might help Dysart understand the reasons for his deed.

Highly-charged, thrilling moments include scenes leading up to Alan plucking out the horses’ eyes (there’s nothing graphic). Such moments are dramatic, fast-paced and accentuated by urgent, foreboding sound effects.

While Alan is central to the play, Dysart is also a pivotal, complex character. Greats such as Christopher Plummer and Anthony Hopkins have played him.

In Palm Beach Dramaworks’ production, it’s Peter Simon Hilton’s turn. He creates a towering figure in a tour-de-force performance, convincingly conveying varied emotions. Hilton’s Dysart is, at turns, professorial, thoughtful and philosophical, caring and comforting, thunderously strict as well as exasperatingly frustrated with what he feels is his empty life and jealous. The latter feeling stems from his jealousy of none other than Alan. At least he's experienced passion, the doctor essentially says.

“At least I galloped,” he imagines Alan mocking him. “When did you?”

“I’m jealous…I’m jealous of Alan Strang!, the doctor admits frankly to a magistrate (a reasoning and purposeful Anne-Marie Cusson).”

But if someone envies the troubled boy, it’s hard to when he’s lying on a bed, convulsing in fright and screaming.

In the role, Steven Maier conveys emotions with such naturalism, you feel as though you’re witnessing in real time a mental patient in crisis.

In a multi-faceted performance, Maier delivers a gripping portrayal.

With mussed, curly hair and a sometimes-maniacal expression, Maier turns Strang into someone you don’t want to approach. At other times, Maier’s Strang, moving quickly and darting, resembles a scared little mouse. You might feel revulsed, but something in you wants to comfort him.

Someone Alan is supposed to fear at times is his father. Unfortunately, as the older man, John Leonard Thompson conveys little to no conviction or a sense of commanding the household.

Julie Rowe fares better as his wife, investing her with an ardent passion and frustration. She plays her as a woman who feels she’s done her best raising her child. Still, she feels that, along with her husband, they’re always to blame when things go wrong.

“Whatever happens, we did it!” she thunders. “It is all the parents’ fault! I only know he was my little Alan and then the devil came!”’

In this case, the devil resembles a horse. It’s not clear in the program whom to credit for creating the horses’ masks. They look real enough without resembling the real-life animal. The creative team leaves it up to our imagination to fill in the blanks. Speaking of the horses, the actors who play them stomp hard, reinforcing Alan's fright. They also move convincingly like a real horse without mimicking one.

In the end, even experts cannot fully prevent people from acting on them. Unfortunately, sometimes such actions result in self-inflicted injuries or injuries to others.