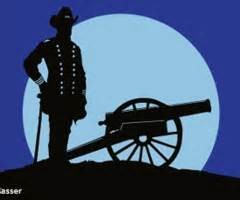 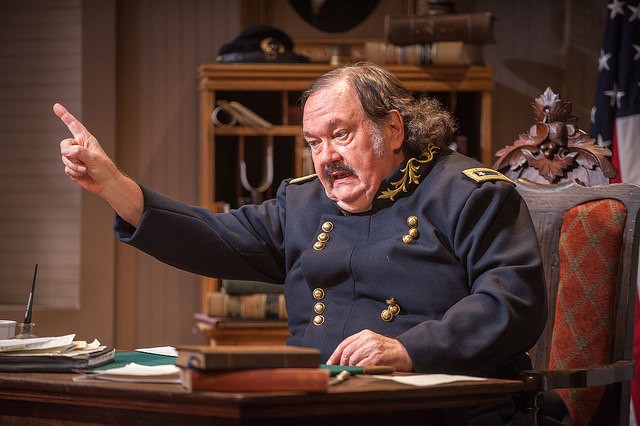 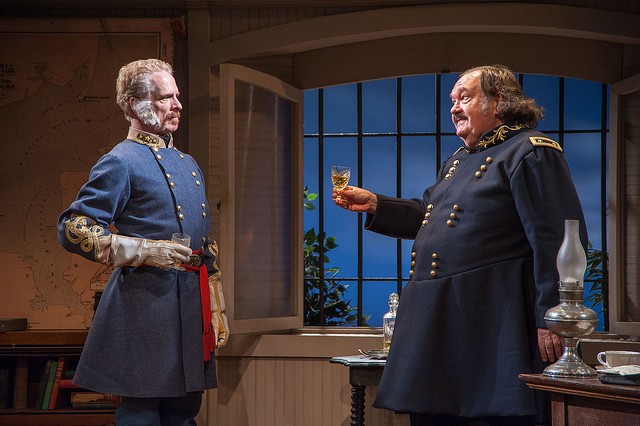 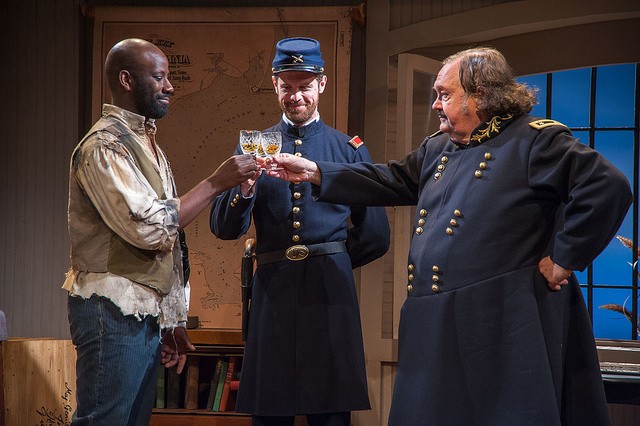 The Berkshire theatre season was launched last night with a wordy, make that "convoluted" (a signifier in the script), absurdist comedy based on an incident during the Civil War.

By any definition Major General Benjamin Franklin Butler (November 5, 1818 – January 11, 1893) was a scoundrel, opportunist, sophist, and profiteer who by the time of his death was worth some $7 million. It was a staggering fortune for the time acquired largely through graft, corruption and flagrant double dealing.

He is said to have looked the other way and pocketed a cut to allow trade that supplied the Confederacy. This occurred while General Grant was attempting to end the traitorous commerce.

With no significant military training, through political manipulation, he joined the Union army as a general and become the commander of the strategic Fort Monroe in Virginia. This occurred just as that state seceded from the Union. That proves to be a key plot point as the Confederate States of America were then, by definition, a foreign nation not governed or bound by American law.

The first act, set in his office with bars on the window looking over the fort and its parade grounds, the ersatz general (David Schramm) engages in a complex exchange/ debate with the ramrod erect, West Point graduate, Lieutenant Kelly (Ben Cole).

With all of the pomp and protocol of addressing a superior officer he announces that a fugitive slave "demands" to speak with the commandant of the fort.

General Butler takes great umbrage at the notion of a "demand" from any of God's creatures including but not limited to a runaway slave. There is a summary of those in the chain of command from President Lincoln and his Cabinet to higher ranking officers and his wife from who he will respond to a demand.

If not from that select list any "demand" presented to him is summarily dismissed pro forma.

Frankly, this bantering word play which a former lawyer known for exploiting "loop holes" to the advantage of his clients, goes on far too long. It serves to establish his contrarian personality and mendacity but is an overly taxing setup for the comedy that erupts in the more enjoyable second act.

It takes time to absorb the immensity of Butler's expansive, excessive, slovenly disheveled persona. Initially, it is difficult to accept this corpulent, blustering, out of shape character as anything other than a parody of militarism. He represents all that was terribly wrong about the confluence of power, politics and comedy of errors that disrupted Union leadership, frustrated Lincoln, and resulted in a revolving door of incompetent generals.

By contract the Confederate forces, under the masterful General Lee and his officers, were more professional, disciplined and skilled. They succeeded in prolonging a war that never should have lasted for four years. In the end the South was less defeated than simply worn down and exhausted of resources. Northern wealth and manufacturing prevailed over the collapsed economy of agrarianism and King Cotton.

In the ensuing cat and mouse exchange it emerges that Mallory is far more sophisticated than an uneducated and inarticulate field hand. He may know how to read and write but this is adamantly denied. An unidentified Southern lady has defied the law to educate a slave.

The glib articulation of the slave is a stretch of the truth and implausible interpretation of the zeitgeist of the American 1860s. When they match wits they are presented as intellectual equals. It provides for compelling drama but would a slave indeed have a vocabulary that included words like convoluted? It is possible that he was a brilliant autodidact but just how would he have acquired such skill in nuanced rhetoric just by reading books? The character that Richard Strand creates is beyond exceptional and may even be regarded as a genius.

He is played by Jones with chilling even condescending, understated control. He conveys a complex mix of rage, defiance, strategy and arrogance. This take on a period character is a bit too post modern PC. After baring his back to reveal the scars of the lash one might have expected more fear and vulnerability.

There is a self conscious parody of his sophistication when, to disarm Butler, he engages in a subservient, ignorant "Massah" dialect.

Essentially, Mallory and two other runaways are seeking sanctuary in the fort. It is hinted at that Butler was a moderate with sympathies for the South and states rights vs. federalism. It seems that at the Democratic Party Convention, the prior year in Charleston, he had voted for Jefferson Davis through some 50 plus ballots. He believed that the only way to preserve the Union was by electing a "moderate" Southerner like Davis.

But as a lawyer, as well as general, Butler has respect for the law and constitution. He is bound by the Fugitive Slave Law, which Lincoln initially upheld, to return the runaway slaves to their lawful owners. Slaves were viewed under the law as chattel or property.

As Lieutenant Kelly argues it is likely that the runaways will be killed. In the first act, under pressure from Butler, he admits to hating the slaves. There is a second act reversal as he comes to respect the defiant Mallory.

Mallory argues not just for his own freedom but offers valuable military secrets and strategies as a potential gift to the Union cause. The slaves have been put to work building the fortifications of the Confederacy. He knows their strengths and weaknesses as well as the deployment and depth of artillery.

In the ensuing discussion Butler has found a loophole for not returning the slaves to their masters. Because they worked for the military they represent seized assets or "contraband." While Butler the lawyer respects the Fugitive Slave Law it does not apply in dealing with a foreign nation which is how he defines the Confederacy.

Initially, Butler risked his career in defiance of  standing orders . He prevailed on Mallory that he was not a "free man" and as "contraband" is under the command of the military. While now working for the army he has no rank or uniform but is assured adequate rations, clothing and shelter. That represents more freedom than working for his former master. Within months hundreds of others would seek contraband status in Butler's fort. This siphoned off Confederate assets, which led to thousand of blacks working for the Union army. Eventually this inspired the Emancipation Proclamation which was less about providing freedom than weakening the enemy.

These compelling legal arguments provide the background for a hilarious exchange with Major Cary (John Hickok), a handsome, spit and polish officer and gentleman who has come to negotiate the return of the slaves. On the advice of Mallory, who knows him, the officer has been blind folded to prevent gathering intelligence of Union defenses.

If the first act is a tedious and protracted setup the second act catapults forward as a hilarious and outrageous romp. Strange but true the audience was rolling in the aisles as the rampaging general demolished the Confederate officer.

It's not that Butler has become a born again abolitionist and human rights advocate. Rather, he is a clever attorney who knows how to twist the letter of the law for his own amusement and the benefit of a client. He was known to argue both sides of labor disputes implying a nimble and multi-valent moral compass.

There was a superb cast tightly directed by Joseph Discher. It is, however, the over the top, sensational performance by Schramm that lifts this production to the stratosphere of unbridled delight. On a skill level Shramm evokes memories of the best moments of Zero Mostel. His performance is cut from that same broad cloth and comic genius.

In their supporting roles Cole, Hickok and Jones were letter perfect. They played it straight providing just the right balance for the flat out outrageous, broad sweeping performance of Schramm.

While rooted in fact the play by Strand stretches the truth to provide a massively entertaining evening of theatre. The real life Butler was a dirty rotten bounder but last night at Barrington Stage it was just a hoot to see him at full blast blustering out of control.