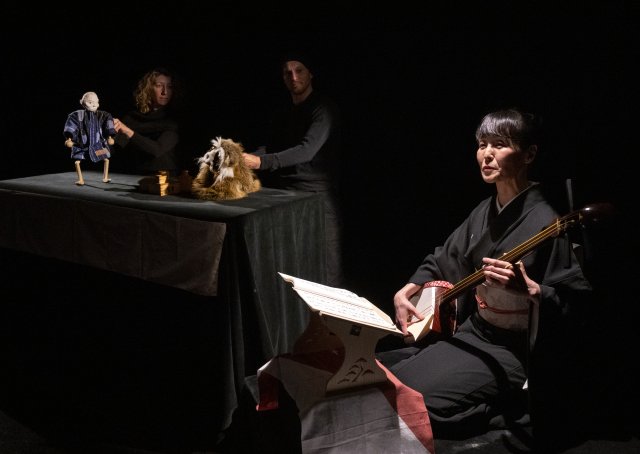 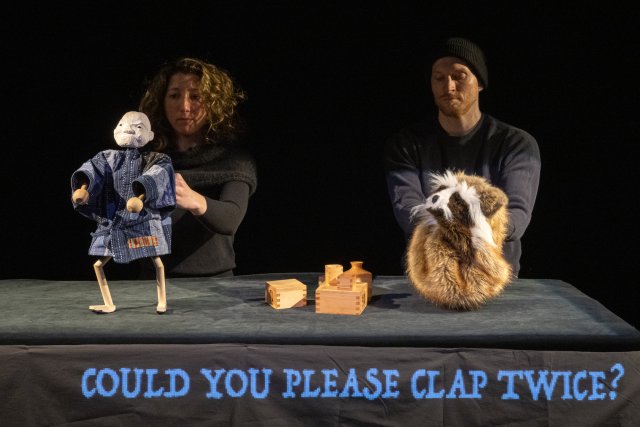 One Night in Winter Sachiyo Takahashi and Rowan Magee 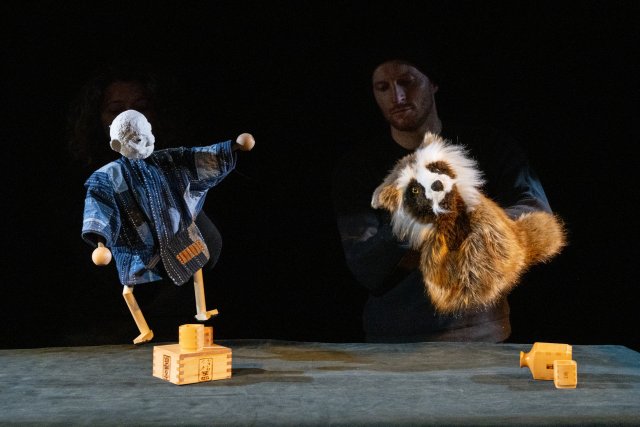 One Night in Winter A classic fight at HERE 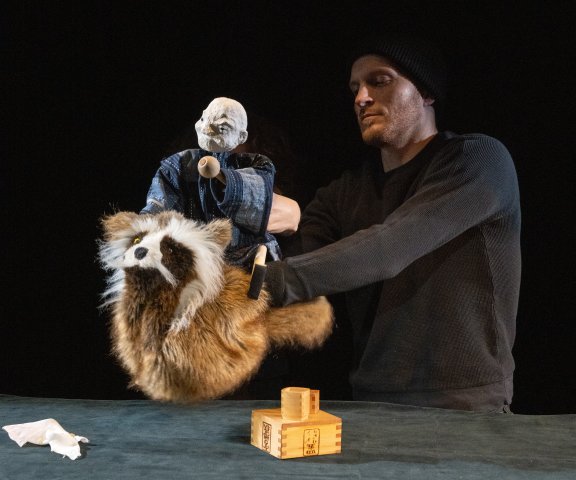 One Night in Winter at HERE 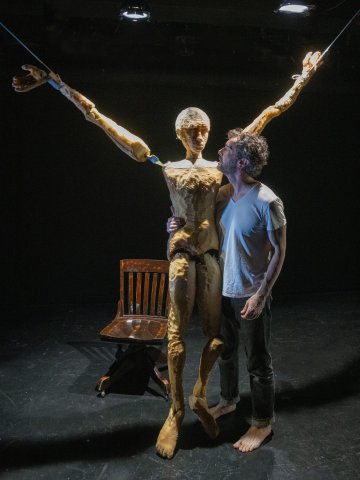 ANIMIST by Andy Gaukel at HERE 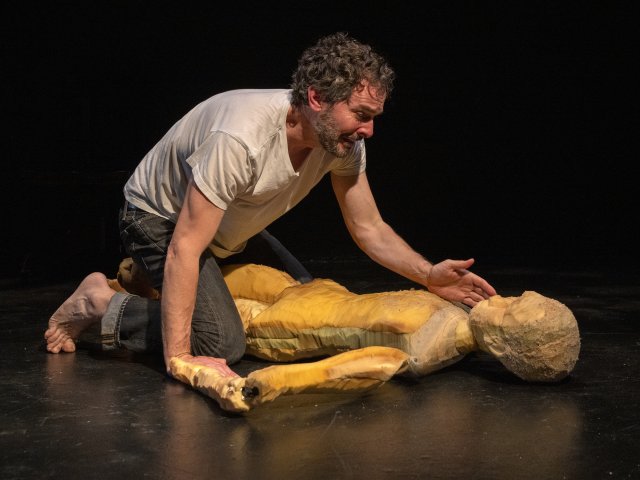 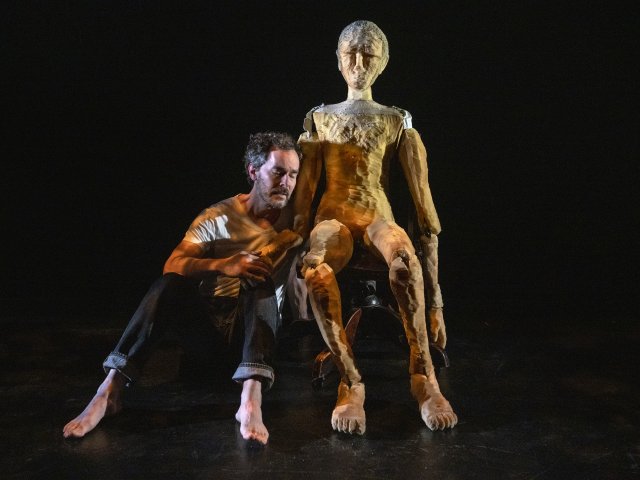 Who is in control? ANIMIST at HERE Grown-up Puppetry 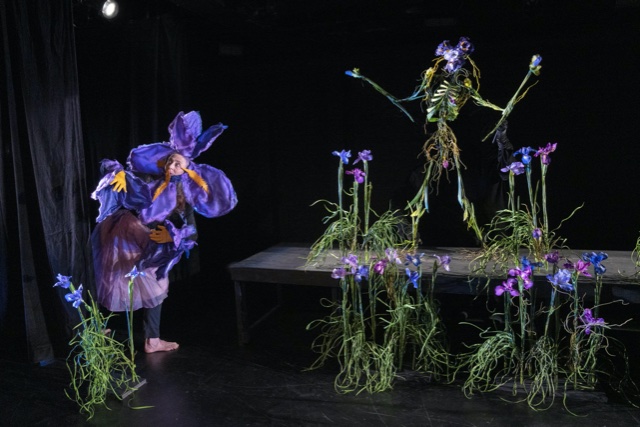 The delightful Walking Iris is.a work in progress at HERE 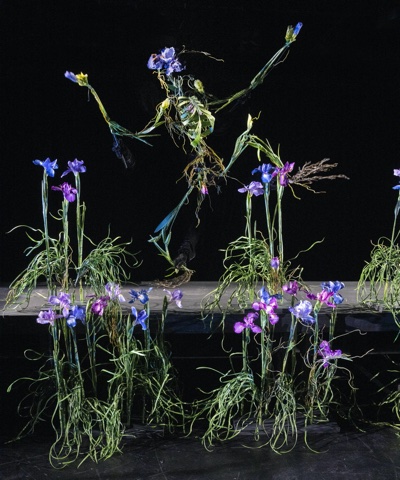 A dancing Iris from Walking Iris at HERE. 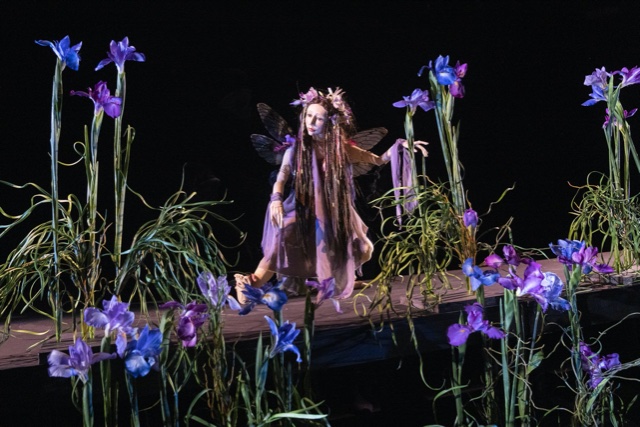 The Dream Music Puppet Program was inaugurated at HERE in 1998. The iconic puppet drama  Symphonie Fantastique premiered that year. Its creator, Basil Twist, now leads the program.  Twist is ever inventive, probing, amusing and witty.  He claims to have set his original work to Hector Berlioz’ music because he liked  the title.  His Puppetopia program, presenting new work, returned to the stage in the spring 2022. The centrality of music, often live,  belies his sloughing off Berlioz.

Each of the shows represented a twist on conventional puppetry. Yet magic ais always created.

In Animist by Andy Gaukel, a solo performer engages with a life-sized puppet to explore the stress of depression, addiction and the profound feelings of loss. The piece is wordless, and, with the exception of a chair,  puppet, and performer, takes place entirely on a bare stage defined by patterns of broken light. The devastated puppet figure gives itself up at the start and finish, draped over the chair, with chest bared to the skies.  The figure can be manipulated with rope like a marionette  to become a hanged man.

Traditionally, some of the most effective puppets have been the crudest. In Liege, Belgium, arm and leg movements are purely accidental.  At HERE, the crudity of Gaukel's figure matches the emotional context of the drama. Its manipulator is always in full view. Quite the opposite of much traditional puppetry, the actor’s personality is present.

One Night in Winter is the story of a lonely old man who receives a surprise visit from a Tanuki (Japanese raccoon dog) on a cold winter night. The telling of the tale as the miniature puppets perform is enchanting. The style grows out of  Chikamatsu Monzaenon's work which was presented with the text chanted by a tayu, as it is here, and accompanied by a musician,  The charm and fascination of miniaturization compels.

Sorry About the Weather is a puppet play by Lake Simons, performed by Simons and Erin K. Orr with music by Rima Faud. Lake Simons says, “Lifting the blanket of dementia and sliding in next to my mother I try to slip beneath her skin and unravel pieces of her life and tie them together with my own interpretation of what is in her weathered mind.”  The work is disorienting, and yet often beautiful.

Although Georges Bataille is not credited, The Eye Which We Do Not Have by Kate Brehm feels like his work.  He wrote: "Desire in eroticism is desire that triumphs over the taboo.”   This puppet drama is as private, distant, and turbulent as anything Bataille imagined.  Alfred Hithcock’s moods are suggested in an eerie, yet compelling tale about suppressed female desire told with puppetry and performing scenery. Its cinematic style points to constantly shifting perspective. Scale is played with both to disturb and delight. The life-sized figure of the woman puppet is voluptuous and inviting.  Miniaturized, she can be herself and also herself in her mind's eye.

Doors by Sara Outing tracks the journey of an ever-changing central figure,  The creator invites us to read with her the opening passages. Outing reports that she was shy and frightened to begin her work, and this engagement with the audience both vibrates her and draws us in. The shadowy central figure is seen through a translucent screen, suggesting the silhouette films made by Lotte Reininger in the 1920s. Doors leaps across time and place to examine four centuries of wandering and survival and finds a vision for the future. Doors is a small, perfect work

Kristin Marting, HERE’s founder, has introduced Twist to composer Huang Rao. The team’s incredible Book of Mountains and Seas opened earlier this year.  Now the team is  headed for the Metropolitan Opera. The incubators have launched veritable cornucopia of art works.

On the heels of HERE's Puppetopia festival, and in celebration of HERE's Dream Music Puppetry program, Cheryl Henson will receive the HEREmanitarian Award and Brian Selznick will receive the Avant-Guardian Award. The honorees will be celebrated at the SPARK Gala on Monday June 6, 2022, at 6pm at City Winery (25 11th Ave, at Hudson River Park, NY 10011).