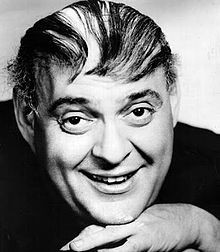 Zero Mostel was the greatest third choice in theatre history. 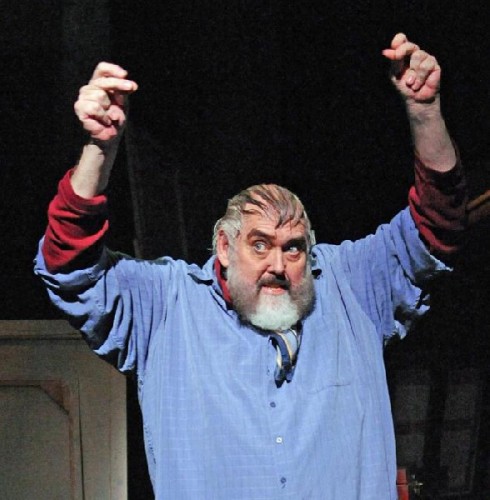 With the signature comb over Jim Brochu snorts and bellows his way through Zero Mostel. 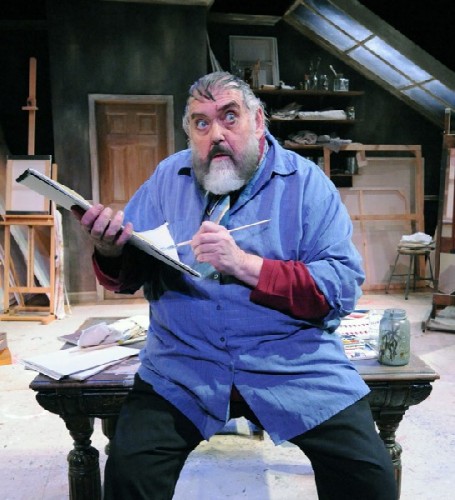 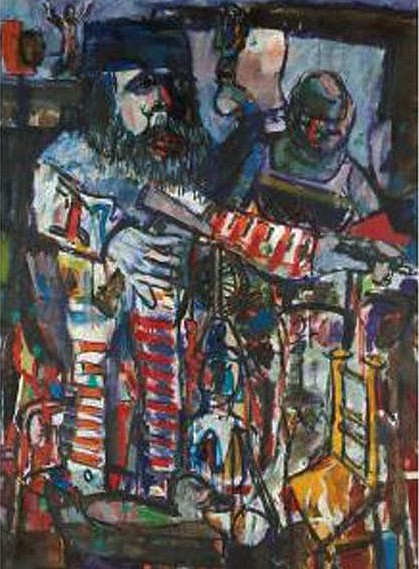 King of Kings a painting by Zero Mostel. 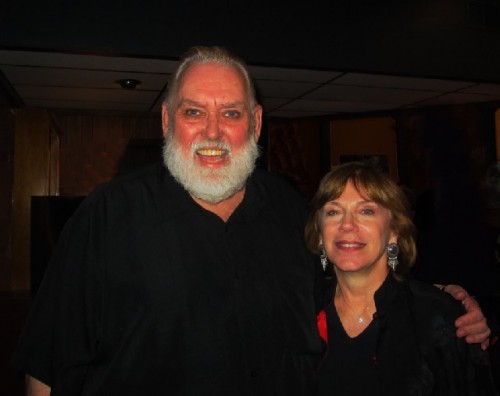 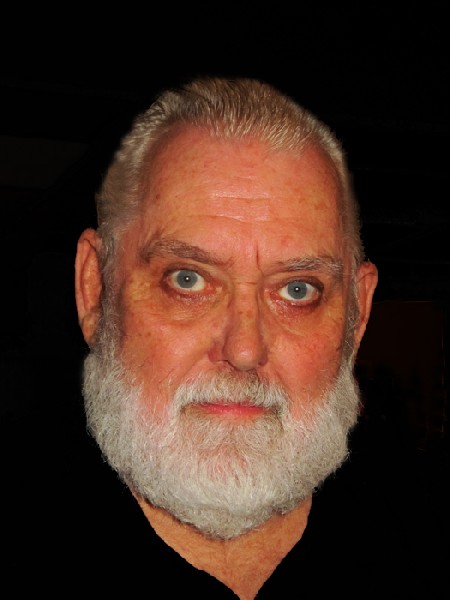 On every level Jim Brochu fills the enormous shoes of a theatrical genius Zero Mostel.

Due to ticket demand, Barrington Stage Company's Stage 2 production of "ZERO HOUR" has been extended for five performances: Tuesday, June 7 through Friday, June 10 at 7:30pm and Thursday, June 9 at 3pm.

Depending upon who you ask or read, pound for immense pound, the monumental Zero Mostel was either a comic genius, one of the too few originals of his generation, or the biggest pile of crap and SOB on earth.

Samuel Joel “Zero” Mostel (February 28, 1915 – September 8, 1977) was an American actor of stage and screen, best known for his portrayal of comic characters such as Tevye onstage in Fiddler on the Roof, Pseudolus onstage and onscreen in A Funny Thing Happened on the Way to the Forum, and Max Bialystock in the original film version of The Producers. He was blacklisted during the 1950s, and his testimony before the House Committee on Un-American Activities was well-publicized. He was a Tony Award and Obie Award winner.

His penchant to become bored with scripts and ad lib, particularly during long running Broadway plays like Funny Thing Happened on the Way to the Forum or Fiddler on the Roof, terrified fellow actors and struck fear in the hearts of producers and directors. Apparently Gene Wilder was scared shitless and totally intimidated when they met on the set of the cult classic film The Producers. Breaking the tension Mostel planted a smacker of a kiss on the stunned Wilder and they became fast friends from then on.

It is an understatement to comment that Jim Brochu took on a huge and daunting task when he wrote and performed Zero Hour. In bringing all of the depth, passion and brilliance of Mostel to Barrington Stage, which continues in Pittsfield through June 5, on a scale of one to ten, Brochu is, well, an eleven.

This is a knock your socks off, don’t miss, production for the ages and an absolutely fabulous way to launch the summer season in the Berkshires. Bravo and kisses kisses to Barrington Stage and artistic director, Julianne Boyd, by being the first filly out of the gate. It ain’t even Memorial Day and Barrington is fast tracking while the other three companies are snoozing in the stable. You go girl.

On ever level Barrington has scored the first smash hit of the season. Now that the glowing reviews are in, with critics competing for pull out quotes and pouring on effusive praise, this will be the toughest ticket in the Berkshires. Perhaps Barrington will talk Brochu to come back again for those who miss this first round. Call now. This minute. Please, I beg you. Trust me.

Mostel just inspires an over the top approach.

I actually saw Zero once in 1961 on stage in Ianesco’s The Rhinoceros. It was a matinee during Spring Break of my sophmore year in college. Frankly, I didn’t understand the play. It was too absurd. Which, of course, was the point, and I just didn’t get it at the time. But I recall being staggered by the way that Mostel commanded the stage and bellowed as the wild beast. He seemed to just devour the audience and more or less had me for lunch. I staggered out of the theatre never knowing what hit me.

Which pretty much sums up his life, career, and impact as an artist. He was an out of control freight train but could pull up to a dead stop and evoke the most tender and delicately nuanced insight and poetic moment. All the more startling as it came from this raging bull of a man.

He performed with every ounce of his body and persona. As Brochu so nicely demonstrates he could evoke emotion or squeeze out a laugh with a glint of the eyes, tilt of the head, flinging arms or inflection of that pipe organ of a voice. Like Mostel an enormous physical specimen, when called for, Brochu is able to mince like a pufta or pirouette with the panache of a ballerina. All of which kept us utterly mesmerized and entertained not just for a Zero Hour but rather a robust ninety, non stop minutes.

While Brochu most often jabbed us with gags and hilarious one liners he could switch gears and rant about the Jewish liberals that were hounded by the witch hunts of Senator Joseph McCarthy. He was among 160 individuals named as communists by a Hollywood nobody Martin Berkeley.

It is a theme that Barrington Stage has explored previously through The Crucible and Trumbo. The company is known for staging theatre with provocative political content like its community based production of The Laramie Project.

As a blacklisted actor Mostel was out of work. In 1957 he and banned theatre people staged an off off Broadway production of Ulysses in Nightown which earned Zero rave reviews and an Obie as Leopold Bloom.

With righteous rage Brochu rails about the persecution of Jewish liberals. He rants about the traitors like renowned director Elia Kazan. He detested Jerome Robbins but reluctantly worked with him when he was brought in to save Sondheim’s foundering Funny Thing Happened on the Way to the Forum. In out of town tryouts the show was tanking. Brochu describes performances without a single laugh. “It was like they were watching Death of a Salesman.” With some chagrin Mostel admits that the little putz saved the show.

Ironically he states that he was the third choice for the role of Pseudolus in Forum which was also the case for Tevye in Fiddler and Max Bialystock in The Producers. Viewed as a last resort he turned these into classic roles. But it also conveys the depth to which he was regarded as a wild card and not to be trusted.

We felt his pain through the fifteen operations when his leg was crushed by a New York bus skidding on ice. He walked with a cane but never on stage.

Brochu depicted the anguish of  Mostel visiting his mother on her death bed after being shunned for many years. The offense was marrying a schiksa. He brought his then eight year old son, in a suit, to meet his grandmother for the first time. Drawing her last breath she denounced them. It was a stunning theatrical moment.

What’s in a name.

Zero. What an odd moniker. But, for show biz, his manager so anointed him when he started as a standup at Café Society in 1941. A better handle than Sam. He began at $40 a week and then got a raise to $400. Which was lot of money for them days. He tells us of having to go on after Billie Holiday.

Zero is a great name for a guy that don’t add up. Not to say there’s was nothing there, a void or empty suit. Perhaps it implies a vacuum or horror vacui with a compelling terror to fill time and space. Zero was haunted by a manic persona with a dread of an empty or unexpressed moment.

Brochu also nicely conveys another, private, hidden aspect of his artistic makeup. He loved to be alone in the studio pursing his first passion painting. It is mentioned that he left a legacy of 10,000 paintings. I have never seen one. Of course he is remembered as a great actor and comic genius. It would be intriguing to see an exhibition of his paintings and drawings.

It is among the many ironies of Mostel that his first and greatest commitment has been ignored. Life sucks and then you die.