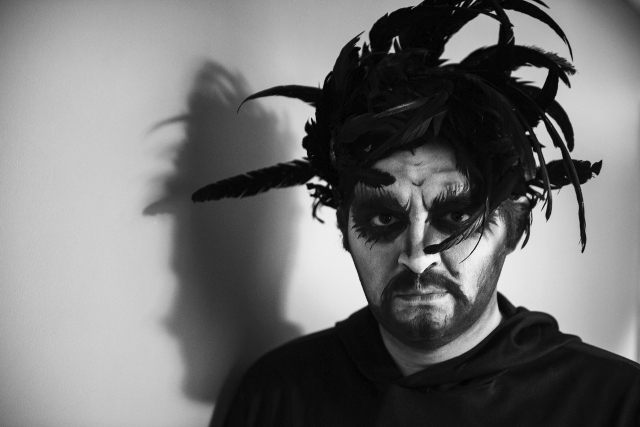 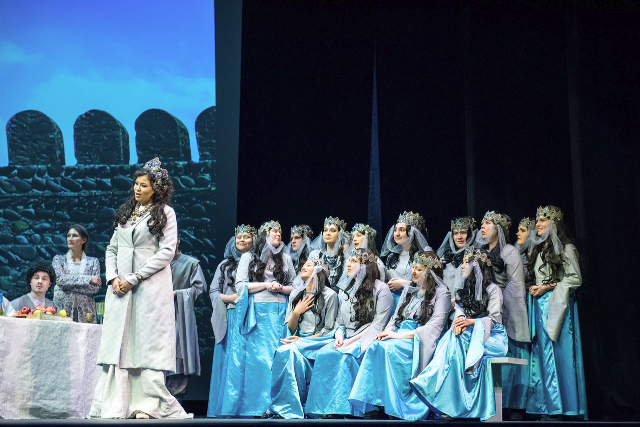 Zhanna Alkhazova as the Princess Tamara with her maids 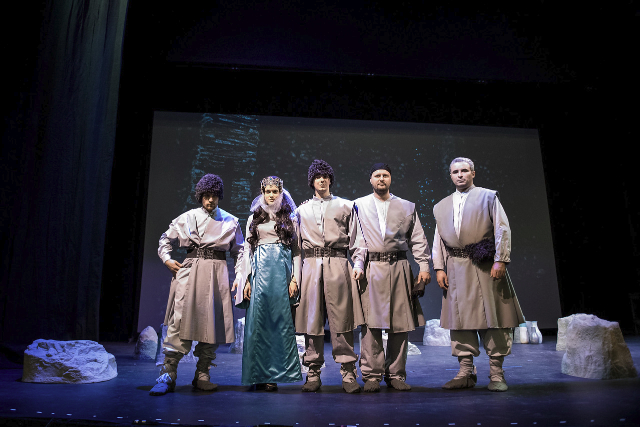 Members of the chorus 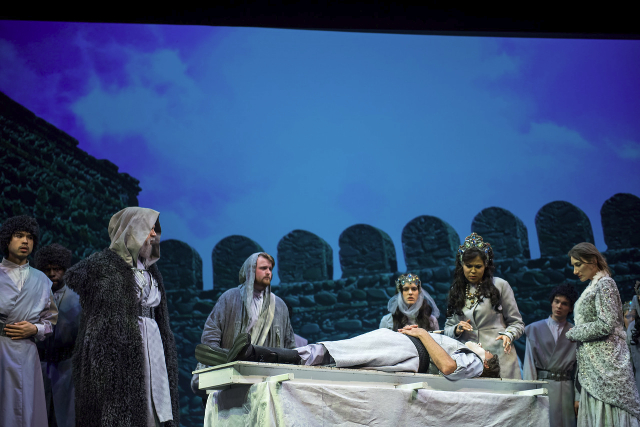 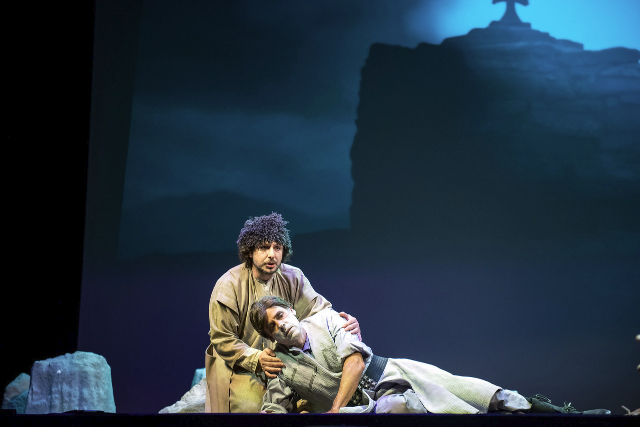 Today, everyone’s talking about Russia; indeed, some of those conversations will be held under oath after a subpoena has been served. But aside from sabotaging an American election and subverting the independence of the nation’s highest office, neither of which has yet been proved, there is a positive Russian influence in America as well. In recent years there has been a large immigration of educated Russians who are avid culture producers and consumers. Regular attendees of Boston cultural organizations are well aware of their presence. The Commonwealth Lyric Theater is an example of how such immigration has enriched our community. Based in Newton, it is an amateur group – in the best sense of the word. It was founded seven years ago by a group of Russian immigrants, primarily Jewish, and it has put on a fully staged opera every year for the past six years in such venues as Newton City Hall and suburban synagogues.

Reports of past productions, which I have not experienced, have been positive and enthusiastic. This year the CLT has gone big-time, renting the Cutler Majestic Theatre in Boston’s downtown theater district to present “The Demon,” Anton Rubinstein’s masterpiece in the opera genre. (Not knowing any of the 20 operas Rubinstein composed, I am taking that evaluation on faith.) Although the group’s amateur roots still showed, the production was successful where it mattered – the story of a Demon and the Princess he falls in love with was dramatically told through often expertly delivered music, acting and dance - and the audience, at least its non-Russian component, got to see an opera it had never seen or even heard of before. All present seemed to enjoy a lively evening in the theater.

The company’s administration is frank about its origins. “We’ve come a long way,” producer Irina Rubinshtein told me in a telephone interview. “We started out as a community theater with a community chorus, but we always imported our vocal soloists and conductors,” she added, showing the company’s ambition from the start. She said that everyone involved was excited about moving downtown to a big theater, adding that the Cutler Majestic had the technical resources for them to present “The Demon” ‘s fantastical elements in the manner required.

The company was founded by Alexander Prokhorov, a Russian conservatory-trained pianist and bass-baritone with advanced degrees from Longy School of Music in Cambridge and Boston University’s Opera Institute, to produce Russian and Slavic operas largely underrepresented in the United States. Prokhorov, who is known in Russian communities for his programs of Russian and gypsy songs, gave an evocative, candle-lit concert of Russian songs on the night between opera performances.

Over the years the CLT has indeed presented some Russian rarities, Rachmaninoff’s “Aleko” and Rimsky-Korsakov’s “Mozart and Salieri” among them. Last year it put on Mussorgsky’s “Boris Godunov” in Newton City Hall. Hardly a rarity, “Boris” is the quintessential Russian opera and is produced regularly in major houses around the world, but not in Boston. The success of that production – esteemed music critic Lloyd Schwartz proclaimed it the best opera production in Boston he saw all year – emboldened the company to move to a bigger theater with greater resources and with hopes to attract a larger audience.

There might be a reason “The Demon” and other Rubinstein operas are not produced often in the United States and western Europe. For all its virtues – and the opera’s extended final scene was riveting and emotionally moving – “The Demon” is not really a masterpiece. In a cultural situation in which Tchaikovsky’s truly great operas, with the exception of “Eugene Onegin,” are seldom presented outside Slavic lands, you can understand why the lesser achievements of his teacher are neglected. Can someone bring me a production of Tchaikovsky’s “Mazeppa”? Please.

As a composer, Rubinstein (1829-1894) was proficient. Primarily known as a pianist – he toured internationally for years - he was the founder of the St. Petersburg Conservatory, where Tchaikovsky and other younger composers studied with him. He wrote in a westernizing style, smoothing over any overt Russian elements except in requisite folkloric dances and folk songs, adopting prevalent Italian standards. Aside from the Demon’s brooding opening monologue, a few other arias and the final scene, the opera has few memorable passages. Indeed, the haunting, relentless overture reminded me of something I’d heard before – Verdi’s overture for “La forza del destino,” which was premiered in St. Petersburg in 1862, where Rubinstein undoubtedly saw it.

“The Demon” is a fantastical work of the kind that appeals to Slavic and Germanic (but not so much to Italian or French) composers and audiences. The story is simple: A Demon, estranged from both Heaven and Earth, is bored and bitter. He sees the young Princess Tamara by a river with her attendants and falls in love. He speaks to her in a voice that only she can hear, promising her eternal power if she will return his love. She refuses and returns to her castle. Her betrothed, Prince Sinodal, and his entourage are ambushed by thugs summoned by the Demon and killed. His body is carried to Tamara’s castle, where wedding festivities have already begun. Tamara continues hearing the Demon’s voice, and begs her father to let her enter a convent. In the convent, as Tamara prays, the Demon finally appears in human form and seduces her. An Angel suddenly appears, bringing Tamara out of her embrace of the Evil Prince. She falls to her death, the Demon stalks off to resume his life of eternal solitude as Tamara and the Angel enter Heaven together.

Of course, there is a psychological reading to this that could occupy many paragraphs, but I think I’ll leave it to focus on the music-drama.

The CLT made this all work, featuring engaging singing actors supported by an orchestra alive to rhythmic changes and realizing the fantastical elements with video projections. There were a few opening night technical glitches that didn’t harm the overall success of the drama. Overly dark lighting, however, in the final scene when the Demon finally appears obscured the nature of his head gear, a problem that I assume could be easily corrected for the second performance. (He wasn’t deformed, as I initially thought, but wore a headdress of leaves, inspired by a painting by Neapolitan painter Salvator Rosa, signaling his uncivilized condition.)

Special praise goes to videographer Patrick K.-H., who set the various scenes, earthly and otherworldly, with projected images. (Why more companies don’t use this technique, which I assume is more economical than building sets, I don’t know.) His choice of churning views of the cosmos for the Demon’s opening monologue, in which he states his estrangement from the world and his cosmic loneliness, show the audience right off that it’s not going to be involved in a bourgeois story of interpersonal relationships (except that they are) but something more. And K.-H. solved the problem of representing the Demon who is heard but not seen until the final scene by projecting a giant eye upon the set, both rock-strewn mountains and castle walls. Brilliant and creepy.

In terms of production values, the costume designs did not match K.-H.’s projections. The turquoise skirts for the female choristers were tacky in their overly-lit scenes, and the Demon’s costume, when lighted so it could be seen, looked as if it were made from left-overs from a pleather factory. Along with the truly amateurish troupe of Georgian dancers imported from New York City – had these kids ever danced together before? – these were the most egregious signs of a formerly  amateur group’s growing pains.

Musically, the production was first-rate. Conductor Lidiya Yankovskaya dynamically led her reduced orchestral forces. And the choruses, both male and female, sang with the rigor for which Russian choruses are noted.

The vocal soloists were of a quality other local companies sometimes fail to equal. As Tamara, soprano Zhanna Alkhazova was a little stiff, but she sang with lovely tone, a little metallic on her high notes but with a fully bodied middle voice. As her ill-fated betrothed, Prince Sinodal, tenor Adam Klein sang with masculine authority, with a touch of yearning. He delivered his big aria with big-time success.  “I would turn into a falcon and fly to my fearful love,” he sang with a lovely lyricism, almost like a folk song. In smaller roles, mezzo-soprano Anna Cley as the Angel; bass Ryan Stoll as Tamara’s father, Prince Gudal; bass Alexander Prokhorov as the Old Servant; and tenor Ryan Brock as the Messenger were all fine.

The vocal excitement of the evening – and I mean excitement – was provided by the young Ukrainian-American baritone Alexsey Bogdanov as the Demon. From his opening monologue in which he displayed a strong, powerful voice, Bogdanov let you know he was a singer to pay attention to - and a name to remember - but how could you not? He commanded every scene he was in, which is no slight to those who sang with him. And for a Demon, a figure cursed of God, Bogdanov was remarkably sympathetic. He made us see and feel his estrangement from society, even as he wreaked havoc on humans, killing Prince Sinodal on his way to his wedding.

In the final act, the opera’s magical elements pay off dramatically. The play between the Demon and Tamara parallels the story of “The Beauty and the Beast” but without the happy ending. The Demon becomes a powerful seducer, pressing the distraught Tamara who has retreated to a convert to mourn the death of Prince Sindoal and to escape his entreaties. But the Demon won’t take “no” for an answer and comes on to Tamara until she can no longer resist, promising to forget his “ancient wound” and renounce his “ancient vengeance” if she grants him her love. For the opera audience, the seductive quality of Bogdanov’s voice, rich and articulate through its registers, like molten chocolate, makes his conquest believable. (His entrance as an embodied being after being represented solely as a projection failed, however, to pack the drama it should have because the lighting left him in obscurity.)

In the end the Demon staggers back into his lonely state to nurse his “ancient wound” and Tamara, who has fallen dead, and the Angel enter the cosmos, again represented in a triumph of video art.