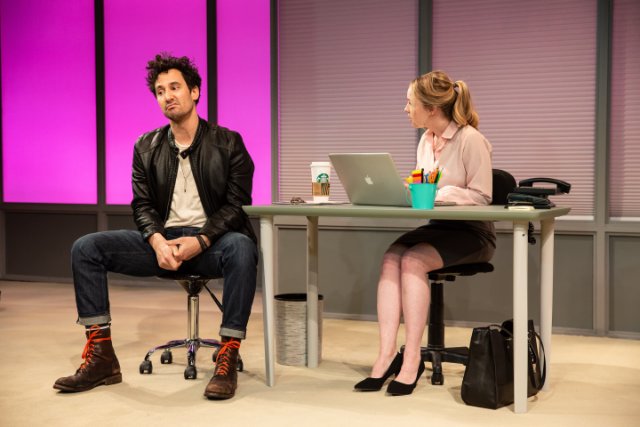 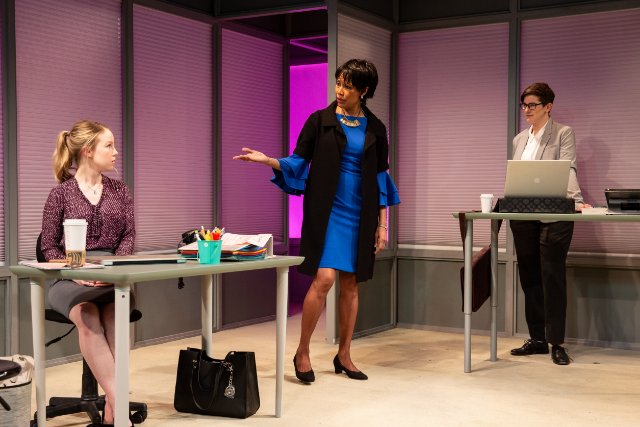 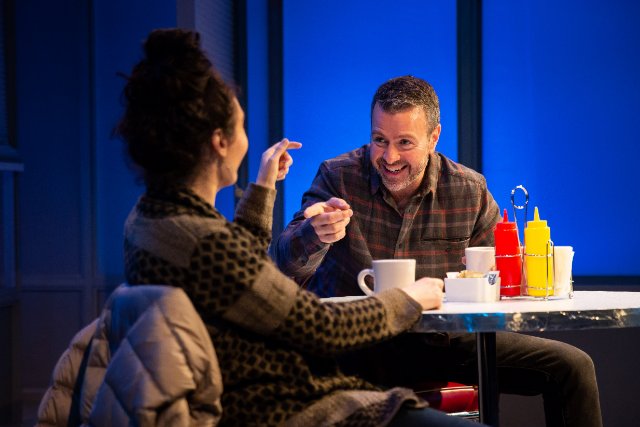 In 12-step programs, same sex one-on-one is mandatory. What happens when it isn't? Wilma Rivera and Joseph Cassese show us. The Lepers by Daniel Damianos 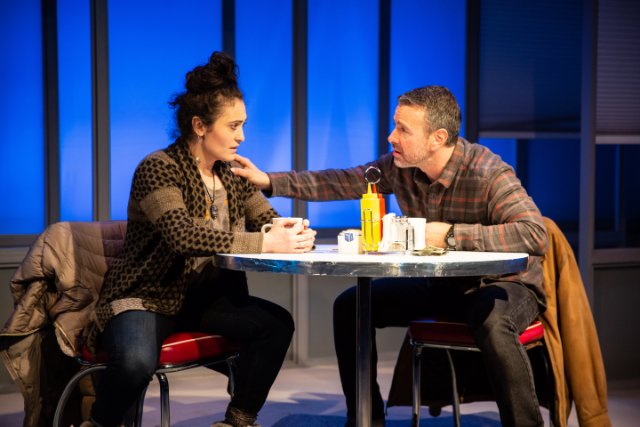 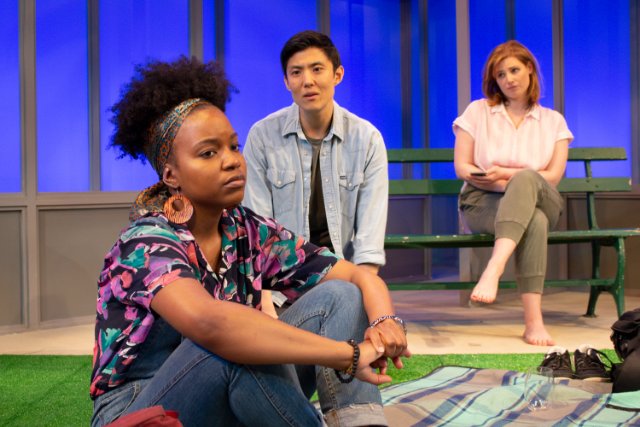 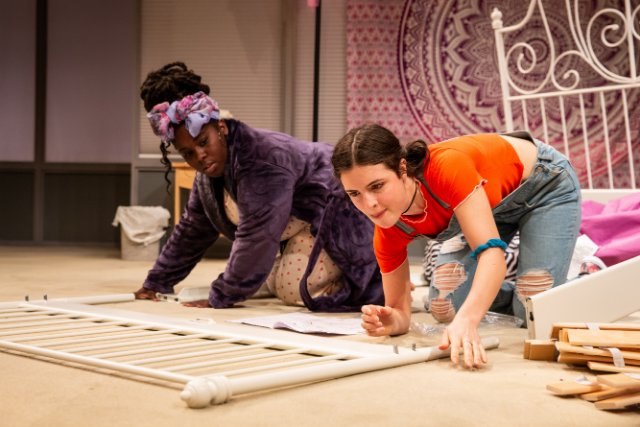 The fabulous Denise Manning and Elise Kibler deal with the Ikea bed in Lily Houghton's Rosie. 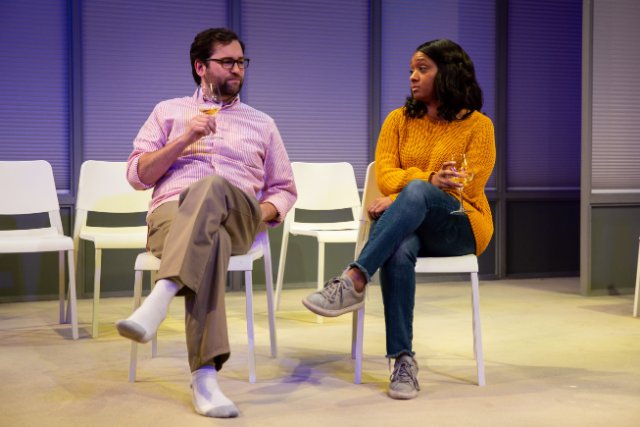 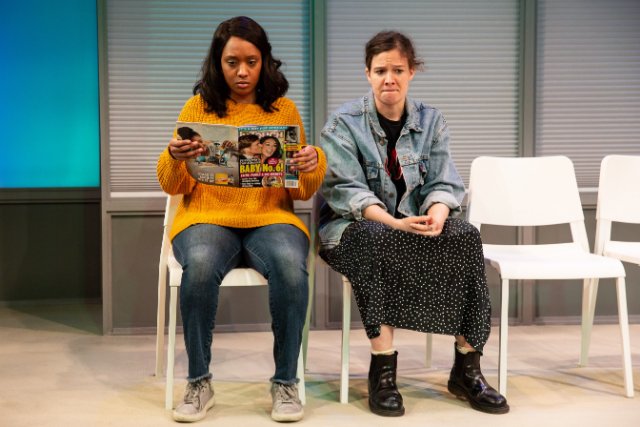 Five writers, five directors and 16 actors bring us an amusing and thoughtful collage of 21st century dilemmas. There is a 'what if' that colors the state of affairs for these protagonists, as if we, within our twenty-first century window look out at the human condition, need to jostle with the consequences. We are given bits and pieces of the shattering assumptions that make up the millennial experience. Scenic Designer, Frank J. Oliva, brings creativity to the simple sets.

I'm Sorry by Amy Fox, tackles the #metoo phenomena with a different twist. As we arrive at the modernly uninviting offices where the manager, Silo (Moria Stone)  stands guard and a small stool is the only seat provided for clients, our sympathies are tested. Clients Jake (Jason Lieberman) and Connor (Tim Barker) and Kim Brockington as the glamorous Mona, the owner of the firm, bring an interesting take on the realities of the accused. Mariah Lee as April, the young go-getting new member of this firm that helps the accused craft their apologies, is a pleasure to watch. Director Morgan Gold uses the space well and puts energy into an otherwise static set.

Wima Rivera as Vanessa in The Lepers, by Daniel Daminano, directed by Mathew Penn, gives us a substantive glimpse into the emotional cascade that is the world of a young woman struggling with sobriety. Vin (Joseph Cassese), her date at a local coffee shop, is predictably supportive and also destructive of her efforts.

Rosie by Lily Houghton, brings us into a college dorm where Nina (Elize Kibler) and Alice (Denise Manning) are putting a bed together. We quickly learn that the dorm room has been the scene of a rape and that the victim, Nina, is trying to rebuild her environment. Manning provides both pathos and a well-crafted comedic element. Directed by Dayna Taymor, Rosie plays with the concept of being free and caged, as the young women dare to demand more.

Low Power, by Jon Kern, directed by Kimiel Harris, wrestles with the barriers to love and marriage within the context of the ever present cell phones and the racial biases that frame the lives of Kyle (Fang Du) and Fabienne (Renika Williams). A picnic in the park with friend Amanda (Gillian Williams) is the scene of the couple's intimacy and estrangement, as they involve themselves more in their cell phones than in truly listening to each other.

Tricycle Backflip, by Dan Giles, directed by Matt Dickson, plays with the confrontation of caricatured social stereotypes: wild, hard-drinking rock and rollers versus uptight 'we don't like any kind of music' type-A achievers. Two sisters lovingly tug for acceptance as their husbands succumb to the perils of the lifestyles they have embraced. Erin Roche, Molly Carden and Drew Lewis give us a spirited glimpse of the dysfunctional realities of these social divides.

This season's Series A One Act Plays, is very much about the 'now'. We are here in the 21st century yet ultimately it is the ever constant human quest for love and social acceptance that unites and impels the drama.