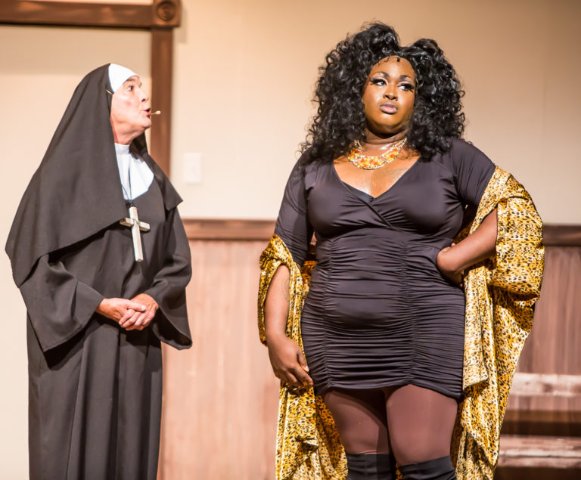 On occasion, a successful movie will spawn a successful stage musical rather than vice versa, and the 2006 Sister Act – the Musical illustrates just that. It is the hilarious story about Deloris, a nightclub diva, who unfortunately witnesses a murder and is placed in witness protection – where else, but in a nunnery!

As “the longest running LGBT theatre anywhere,” Theatre Rhinoceros’s mission is to “enlighten, enrich, and explore . . . aspects of our queer community.” So what connection would prompt Rhino to produce this musical? By convincing the license holder to allow a first – gender switching the key roles – Rhino made it fit. And while this production shows flaws, fun prevails reminiscent of the company’s joyous Priscilla – Queen of the Desert in 2017. This rendition is also made more relevant to local audiences by returning the action from Philadelphia to the original venue of the movie, San Francisco.

Sister Act works because its story line, while silly, does engage. One prejudice that theater-goers may have toward the show is the religious setting and characters. However, the narrative strikes the right balance of allowing the nuns to be more light hearted and irreverent than realistic, while not being disrespectful. And more importantly, the subtext conveys the notion that spirituality and loving relationships exist in both the religious and the secular world.

The piece demands a strong actor to carry the role of Deloris, who becomes Sister Mary Clarence when she goes under cover. Branden Noel Thomas, playing the lead role in drag, dominates the stage. His affect suits the flamboyance and self-indulgence of the character without veering into camp. And his androgynous vocal stylings are remarkable. His upper register and some of the more soulful tracts sound like they come from a powerful blues beltin’ mama.

Of course, the heroine needs a nemesis, and that person is the Mother Superior, who has standards to uphold in her flock of nuns and who acts as a blockade to all of Deloris’s (now Sister Mary Clarence) normal desires like drinking, smoking, and sneaking out to the local bar. The Mother Superior is also played by a male, Kim Larsen. Although he doesn’t feminize his demeanor or his vocalizing, his interpretation works well as an older, authoritative figure. Especially fitting is his version of “Here Within These Walls.”

The other pivotal figure is Curtis, the gangster boyfriend that Deloris hides from. Here, roles are again reversed. Crystal Liu portrays Curtis, and like Thomas, her fine singing voice also carries a mixed gender quality, and her blasting “When I Find My Baby” surprises with its appeal.

A final major performance of note is Abigail Campbell’s portrayal of the novitiate Mary Robert who acts as Sister Mary Clarence’s advocate throughout. The always cheerful, diminutive Campbell also surprises as another powerful voice in a small package with her great “The Life I Never Led.”

The plot of Sister Act is highly predictable, but that matters little, as the antics make this a lively show. One fun example is when Deloris, supposedly a nun, is asked to say Grace before a meal, and her hilarious prayer includes the invocations “And to the Republic for which it stands,” and in a tongue-in-cheek nod to Martin Luther King, “Thank God Almighty, we can eat at last.”

Although the score is not always memorable, it contains enough catchy tunes and opportunities for singers to show their stuff. The lyrics are always clever and relevant. And while inconsistent acting and some weakly performed roles impair the quality of the show a bit, the singing is generally strong. Thomas has fun with a number of his numbers, including “Fabulous, Baby,” “Take Me to Heaven,” and more.

Director/choreographer AeJay Mitchell has much on his plate with this production. Given resource and stage limitations, he does a commendable job in creating an entertaining show.

Sister Act – the Musical with music by Alan Menken, lyrics by Glenn Slater, and book by Cheri Steinkellner and Bill Steinkellner is produced by Theatre Rhinoceros and plays at the Gateway Theatre, 215 Jackson St., San Francisco, CA through June 1, 2019.