Rocking Out with Train, Evanescence and Pops 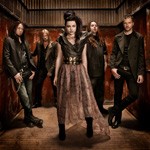 Grammy winning Evanesence has been added to Labor Day weekend. 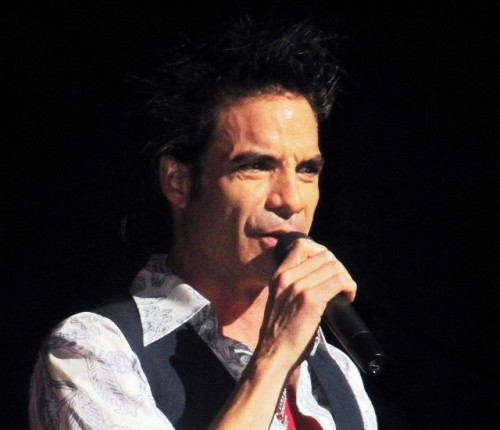 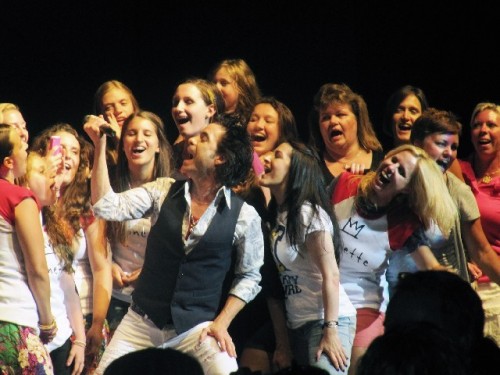 Teenieboppers joined Monahan on stage at Tanglewood during as raveup performance. Giuliano photo.

This year Tanglewood has revamped its final Labor Day Weekend. Having cancelled the struggling annual Tanglweood Jazz Festival in Ozawa Hall the focus is now on three nights of concerts on the larger stage of the Shed. While most of the BSO will pack and return to Symphony Hall some will remain for one last hurrah of Pops.

An appealing star studded evening of Pops will be augmented with two rock bookings.

The middle aged Train, revamped as a teenie bopper band, returns to Tanglewood to launch the Rock/ Pops weekend on Friday night. They sold tickets last year and appeal to an age group which saw Titanic fifteen times each on average. Once again they will be screaming, fainting in pure joy, running up aisles, flashing cameras and bolting on stage for a hug in.

The weekend bookends with Boston Pops, Michael Feinstein, Betty Buckley and Christine Ebersole in a season-ending “American Songbook” concert on Sunday, September 2. This seems like a fresh take on Pops with some enormously talented and bankable guest artists.

On Saturday night Grammy award-winning rockers Evanescence will attempt to blow the roof off the Shed. The "hard rock" group Chevelle will open. It is interesting that in deference to the Town of Lenox the concert, which promises to be loud and boisterous, starts at 7 PM. Meaning that they plan to pull the plug between 10 and 11.

Programming two nights of rock to close the season represents a major policy shift for Tanglewood. Several years ago an appearance by Wilco caused an uproar from conservative Berkshire Eagle critics and columnists. It was seen as a violation of hallowed ground.

While readers in letters to the editor argued from more youth oriented programming to balance the books and assure a healthy future for the renowned music festival. Long term Berkshire residents recall an era when rock was more frequently heard in Lenox.

The policy of Tanglewood has been to bend but not break. James Taylor has become a fixed part of the heritage with annual sold out concerts. There was a successful Crosby, Stills and Nash performance as well as Train.

This season has seen a welcome introduction of A List jazz artists performing during off nights in Ozawa Hall. There have been solid audiences for Chris Botti, Ebene Quartet and the pairing of Wynton Marsalis and Christian McBride. All of these artists had previously performed at Tanglewood. The season's jazz programming ends on Sunday, August 26 with pianist, Chick Corea and vibes player, Gary Burton.

Overall, this is a great move in the right direction. Having Tanglewood close the season with three strong nights in the Shed is a shot in the arm for the cultural/ tourism economy. Until now it made no sense to have all those empty seats and its potential revenue during  a holiday weekend.

By providing more ticket sales through diversified programming this is a strong move toward affirming the long term viability of Tanglewood. It always will be the summer home of the venerable BSO.

With a strong kick finish to the season and a rocking Labor Day every arts organization, theatre, inn, and restaurant should send Mark Volpe a magnum of champagne and a dozen long stem roses.

Tanglewood Release and Details Below

Grammy award-winning rockers Evanescence will round out the popular artist festivities on Labor Day weekend at Tanglewood with a performance in the Koussevitzky Music Shed on September 1, at 7 p.m. Hard rock outfit Chevelle will open the Saturday-evening performance, and tickets, available on May 29, range from $76 to $22. Evanescence and Chevelle join a Labor Day line-up including the previously announced rock group Train, returning to Tanglewood on Friday, August 31, at 7 p.m., as well as the Tanglewood debut of BSO Youth and Family Conductor Thomas Wilkins, who leads the Boston Pops, Michael Feinstein, and Christine Ebersole in a season-ending “American Songbook” concert on Sunday, September 2, at 2:30 p.m. Tickets for the Boston Pops “American Songbook” concert range from $21 to $117 and Train tickets range from $22 to $88.

The multi-platinum hard rock band Evanescence, led by Amy Lee’s operatic, passionate vocals, has sold close to 25 million albums since its 2003 debut, Fallen. Their premiere single, “Bring Me To Life,” snagged the band a Grammy for best hard rock performance. Other massive hits, including “My Immortal” and “Call Me When You’re Sober,” established Evanescence as worldwide tour headliners. After a break following the conclusion of the tremendously successful tour behind The Open Door, Lee, guitarists Terry Balsamo and Troy McLawhorn, bassist Tim McCord, and drummer Will Hunt came together to write a number of songs for Evanescence, their latest self-titled release. Though already superstars, Lee and her bandmates have the enthusiasm of newcomers, as they look to a future that is brimming with possibility brought by the release of Evanescence.

Chicago alternative hard rock trio Chevelle preserve their underdog spirit on Hats off to the Bull, their sixth full length album released December 6, 2011. That attitude has characterized the band since its independent debut, 1999's Point #1. Shortly after bursting onto the scene, the group made its major label breakthrough on the platinum-selling Wonder What's Next in 2002. The album spawned chart-topping hits "Send the Pain Below" and "The Red," leading to high-profile tours like OZZfest. Meanwhile, their next effort, 2004's This Type of Thinking Could Do Us In, exceeded gold status and the follow-up Vena Sera bolstered their prominence even further. Most recently, the band scored its highest entry into the Billboard Top 200 with Sci-Fi Crimes in 2009 debuting at #6.