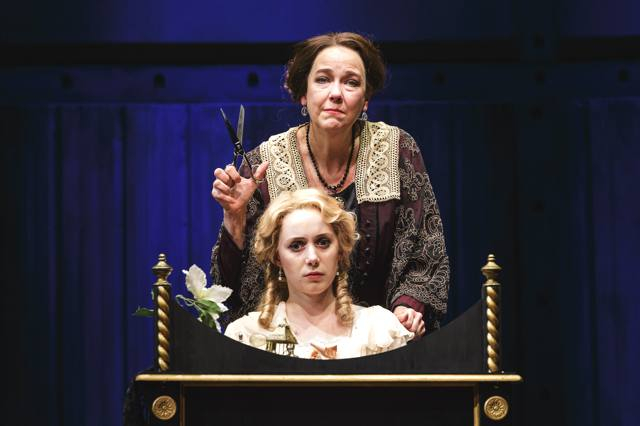 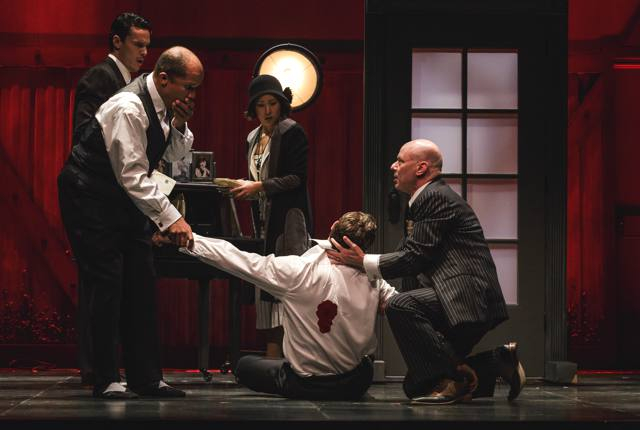 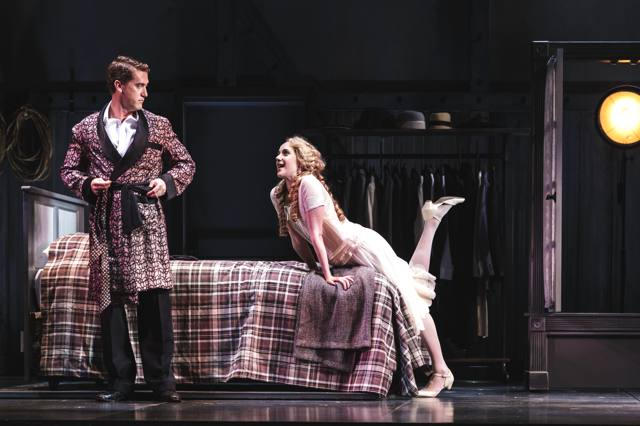 The La Jolla Playhouse has the best track record of any West Coast theatre when it comes to sending their original theatrical productions to Broadway (over 30 of them to date). Their 2008 musical production “Memphis”, written by Joe Di Pietro and directed by Christopher Ashley went on to Broadway winning a 2010 Tony Award for Best Musical.

The just opened world premiere noir musical thriller “Hollywood”, again written by Di Pietro, and helmed by Ashley, is looking to pull off a Tony Award-winning ‘Daily Double’ coup, as the punters say at nearby Del Mar Racetrack. In this critic’s opinion, “Hollywood” has excellent odds to encore the feat in the 2017 Broadway season.

How could it miss? It’s perfect fit! There is no love lost between the movie and TV industry ‘Titans of Hollywood’ and the guardians of the legitimate stage theatres of New York; The Broadway Theatre League. Broadway regularly disses all things Hollywood, especially actor/movie stars trying to burnish his or her acting chops by doing a turn on Broadways’ stages. Perhaps, it’s a form of payback for the flight of their beloved Brooklyn Dodgers who bolted for the Shangri La weather of Southern California back in 1956. Who knows? But, I digress.

The story is set in 1922 and is based on a real life event that shocked the silent movie industry. America embraced the motion picture and the actors performing in them almost immediately. People then as today, couldn’t get enough of even the smallest bit of gossip concerning their favorite celebrity. Hollywood was a magnet for the star-struck. Young girls with their mothers in tow descended on the fledgling industry who were making movies operating in a small section of Los Angeles called Hollywood, hoping to become part of this exciting, and excess-oriented life style.

Famed movie director William Desmond Taylor (Scott Drummond) is found murdered in his home. The celebrity suspects mount as the headlines explode with lurid reports of love triangles, hush money, infidelities, drug use and cover-ups. Enter Indiana’s favorite son Will Hays (Patrick Kerr) Hollywood’s newly appointed moral watchdog, determined to silence the scandal and “purify this increasingly corrupt city.” Boy, does he have his work cut out for him.

“Hollywood” is a ‘who dunnit’ murder mystery, which at times, delivers intentional over-the-top performances. This is a cast who know how to deliver the goods. It’s steamy, sexy, and funny, despite the murder that no one really wants to solve (including the police).

“Audiences are in for a fantastic night at the Playhouse with Joe’s smart and sexy new play. Though set in the Golden Age of movies, “Hollywood” depicts a time and territory that is uncannily like our own, both politically and culturally,” said Ashley in an earlier press statement. And he ought to know. He’s one of most savvy and inventive directors working today. I still remember his inspired direction of “A Midsummer Night’s Dream” at the Playhouse several seasons back.

The creative team led by Ashley delivers a wonderfully nuanced set design by Wilson Chin that draws in the audience into the story. The lighting design by Howell Binkley who also designed the lights for the blockbuster New York production “Hamilton”, allows just the right amount of light to capture the noir feel, yet see the period-perfect costumes of Paul Tazewell. The sound design by Chris Luessmann and the projection design by Tara Knight and music composer and piano player Wayne Barker, are also first rate.

“Hollywood”, is a splendid, fast-paced noir musical thriller that rings every bell and toots every horn and whistle. It’s a show that not only entertains big time, it also sports the trappings and technical elements that fit the profile reserved for large and glitzy Broadway productions. The richly creative and inventive team of Di Pietro and Ashley make a strong case for lightning to strike once again when Tony Award time comes around in 2017 or 2018.

Naturally, there will be pruning, tightening, crafting and shaping the production to fit the Broadway profile. There will no doubt be rewrites, even new songs and numbers either to add or to delete. But when the production opens, I believe both coasts will be pleased on opening night. I’ve already transferred this sensational production to Broadway.