The Originalist by John Strand at Court Theatre 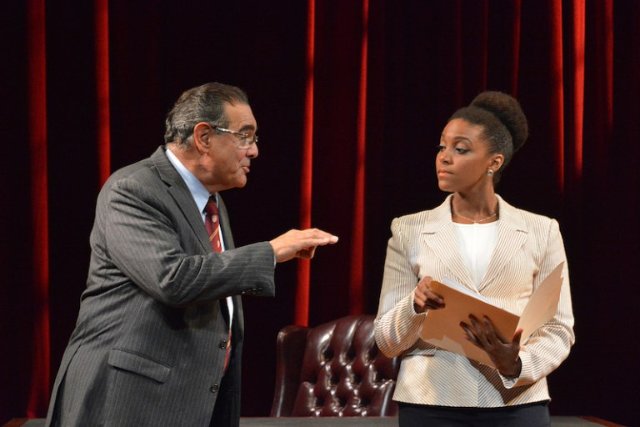 The Originalist profiles one term in the career of the late Supreme Court Justice Antonin Scalia. The Court Theatre production, directed by Molly Smith, proves that although Scalia may have been a “monster,” as his opponents called him (to his delight), he was really a charming monster.

The story told in John Strand’s play is set in the 2012-13 term in which Scalia (Edward Gero) hires as one of his clerks a high-achieving, outspoken Harvard Law School graduate who happens to have political views directly opposed to his. Jade Wheeler plays Catherine (Cat) as ready to spar with her boss and mentor on judicial issues that came before the court as well as other political issues. The play is not a docudrama although excerpts from some of Scalia’s dissents and opinions are part of the script.

Scalia’s first encounter with Cat comes during audience Q&A after one of his speeches. She challenges him about his opinions in ways he’s not used to (but clearly enjoys). Later she successfully interviews for a job as his clerk. Their dialogue is always fast, witty and intense—and delves into recent Supreme Court decisions, especially those regarding gay rights.

At one point, the justice explains to Cat, “If you manage to have a career in law — and right now I wouldn’t bet on it — you might someday come to understand how much it takes to rule on law and not on emotion. Law is carved in stone. Emotion is whatever you had for breakfast.” Law is carved in stone is the essence of Scalia’s position as an originalist: The U.S. Constitution means only what the Founders wrote and not what lawyers (and jurists) today might interpret it to mean.

Cat’s arguments and challenges to Scalia’s opinions are part of her search for a political middle ground. As Strand notes in the preface to his script, she wants to know how compromise became a dirty word in American politics. How did we become so polarized that we see our political opponents as monsters? Why has civil discourse been replaced by a verbal food fight? The play takes a small step toward answering these questions.

The 100-minute play is a fast and furious debate between Scalia and his clerk, with occasional commentary from Brad (Brett Mack), a conservative law school graduate. Cat successfully argues Brad down. Scalia brushes him off like a fly.

Along the way, Scalia relives his Senate confirmation hearing, his law school oral exam, his teaching career at the University of Chicago (“Teaching was too safe. I waned the combat of politics.”), being passed over for Chief Justice, and the death of his father. Her father dies during the course of the play. Scalia and Cat discover they have a few things in common, including Catholicism. They play a game of blackjack and he teaches her to shoot.

The Originalist poses two strong intellects against each other. Scalia has 50 years of jurisprudence on Cat, but she holds her own with him and he demonstrates that he respects her intelligence. Strand points toward this congruence from the beginning, and the play ends a little too happily-ever-afterish. That soft ending is what keeps The Originalist from being a four-star production for me.

Director Smith developed the play at the Arena Stage in Washington. It has since toured to two other theaters before the Chicago premiere. Edward Gero, who also has played Scalia from the beginning, is masterful at recreating the justice’s style and bearing. Wheeler, who performed in two other productions of The Originalist, is superb as Cat.

Misha Kachman recreates his original scenic design for the Court Theatre and Colin K. Bills handles lighting design, as he did for the Arena staging. Joseph P. Salasovich’s costumes make another appearance for this production. Eric Shimelonis’ outstanding sound design is highlighted by interludes from some of Scalia’s favorite operas, including opening with Verdi’s “Libiamo” aria from La Traviata and closing with Donizetti’s L’Elisir d’Amore.

You’re likely to enjoy the play more if you have kept up with important SCOTUS decisions over the years. The decisions are tossed around by their citations, sometimes followed by a brief explanation. Baker v Nelson, Romer v Evans, Lawrence v Texas, Bowers v Hardwick, Windsor, Obergefell. Stanford v Kentucky, Heller, and of course, Roe v Wade. If you’re inclined to prepare to see a play, you can review those cases here. You might also look up stare decisis and certiorari, unless you went to law school.

The Originalist continues at Court Theatre, 5535 S. Ellis Ave., through June 10. Running time is 100 minutes with no intermission. Buy tickets for $44-74 for performances Wednesday-Sunday. Phone 773-753-4472 for info. Find more about Court’s discussion series on The Originalist here.

A special bonus: You’ll receive a pocket copy of the U.S. Constitution and the Declaration of Independence. A handy index will help you find the Article and Section that covers the topic you’re preparing to have an argument about.