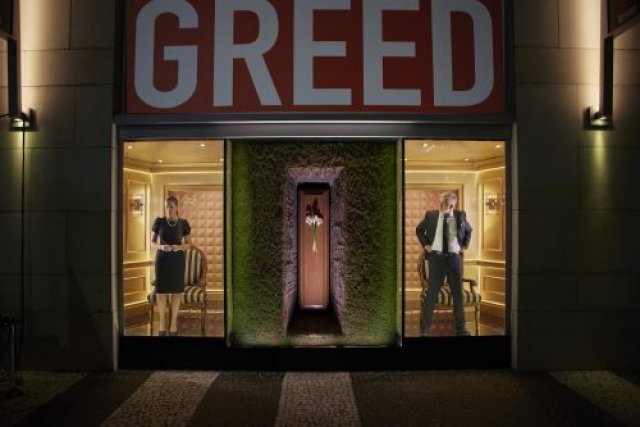 For Seven Deadly Sins, Miami New Drama Artistic Director Michel Hausmann commissioned seven high-profile, successful playwrights to pen a play about each of the seven deadly sins. Actors performed inside each space, behind glass. Meanwhile, audience members sat outside, socially distanced, and masked. They listened to the shows with ear phones. For the production, Miami New Drama divided audiences into groups of 12. Each group visited the seven settings on a rotating basis. The theater company extended the production, which drew sell-out crowds, multiple times.

In a pre-recorded acceptance speech, Hausmann said: “I want to congratulate the seven brilliant playwrights who came together with one goal in mind – to keep the spirit and hope of our community alive and show the resilience and power of theater. Seven Deadly Sins was our attempt at keeping the flame alive as our theatrical ancestors have done for us in moments of societal hardship.

“Over 100 inspiring theater professionals worked tirelessly over the better part of a year to make this dream a reality. We are so grateful to each and every one of you. This award belongs to all the amazing artists and technicians who made Seven Deadly Sins a light in times of darkness.”

One of those artists, cast member Jessica Farr, wrote on social media: “It was such an honor to be a part of this production during a time when we didn’t know if any of it was even possible. The resilience and ingenuity of the cast and crew made it all a reality and the results were nothing short of breathtaking.”

Now, Seven Deadly Sins is on its way to New York City. Specifically, it will begin performances on June 23 ahead of a June 28 opening in NYC’s Meatpacking District. While one of the playwrights, Miami New Drama co-founder Moisés Kaufman, will remain with the production, the other playwrights are new. For the New York production, Thomas Bradshaw will write a play about sloth, MJ Kaufman pride, Moisés Kaufman greed, Jeffrey LaHoste envy, Ming Peiffer wrath and Bess Wohl lust.

The Drama League Awards have recognized outstanding achievements on and off Broadway since 1935.

In addition to Seven Deadly Sins, the nominees and winners, named on Friday, are as followed. The winners are in bold.

Where Did We Sit on the Bus?
Written by Brian Quijada
Directed by Matt Dickson
A digital creation by Satya Chávez and Matt Dickson
Actors Theatre of Louisville

The Manic Monologues
Originally Created by Zachary Burton and Elisa Hofmeister
Virtual Experience Conceived and Directed by Elena Araoz
McCarter Theater Center in collaboration with Princeton University Health Services, The 24 Hour Plays, and Innovations in Socially Distant Performance at the Lewis Center for the Arts

The Founders Award for Excellence in Directing Honoree
Liesl Tommy