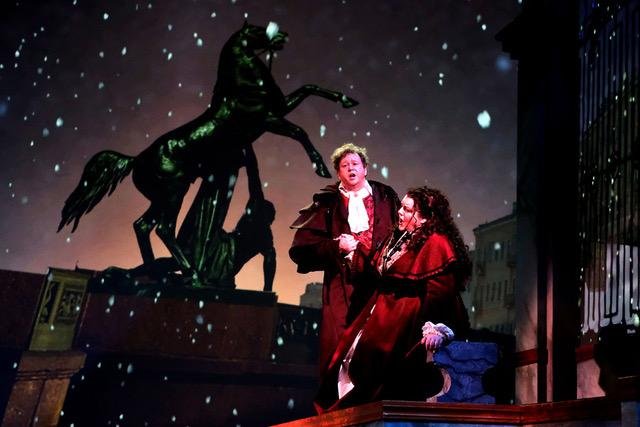 Michael Boley as Hermann and Rhoslyn Jones as Liza. Photo by Otak Jump.

Few classical composers can claim a substantial portfolio in both instrumental music and opera.  In the United States, Pyotr Illyich Tchaikovsky is best known for his distinguished ballet music, “The Nutcracker,” “Swan Lake,” and “Sleeping Beauty,” as well as great symphonic pieces such as his “Symphony No. 5,” and “Piano Concerto No. 1”.  Tchaikovsky also wrote 11 operas, several of which remain immensely popular in Slavic countries.

Gaming occurs in numerous operas, usually to create an ambiance or to elaborate a main character’s character, sometimes as an addictive personality.  In “Pique Dame,” gambling acts as the central metaphor of casting one’s fate to the vagueries of chance.   Uniquely, the title of the opera is represented by one symbol-laden playing card.

Hermann, a seemingly virtuous but poor army officer, often visits the casino with friends but only as an observer.  Upon falling in love with Liza, he finds that she is the granddaughter of the Countess and therefore above his station.  Dedicating his life to becoming rich enough to marry Liza, he learns that the Countess extricated her way out of extensive gambling debts by betting on an irrefutably successful sequence of three numbers.  But that supernatural bestowal carried threatening conditions.  In his obsession to learn the sequence, Hermann’s morality is compromised, and Liza questions whether he still loves her or is only interested in the money or the quest itself.

A suitably doleful Michael Boley portrays the desperate Hermann.  In a role that challenges in vocal complexity, he also sings in every scene.  From his first significant set piece, the aria leading to a duet with his friend Tomsky, “I don’t even know her name,” Boley displays both range and power.  Early on at opening night, his voice seemed to lack full melodiousness, but it sounded richer as the evening progressed, and he redeemed himself well.

As the object of Hermann’s affection, Liza is played by Rhoslyn James.  With some exception, the tessitura of Liza’s part in early scenes is middle range, which plays well to James’ big, round vocalization in that realm.  Her duet with Polina, “Tis evening, the edges of the clouds have darkened” and her ambivalent aria about loving two men “But why these tears?” both demonstrate her easy power.  Range demands increase later in the opera, leading to her beautiful rendition of Liza’s evocative signature aria in Act 3, “Ah, I am worn out by grief.”

Tchaikovsky is at the top of his opera game in “Pique Dame.”  His plaintive and phantasmic sound, often relying on the reeds and large strings, suits the ghostly elements of the script.  The story line compels as we see Hermann’s obsession take hold, and considerable tension created.  The principal action is complemented by orchestral interludes and extensive use of chorus.  To make the setting more exotic to then contemporary audiences, the composer moved the action back to the 18th century.  In a gesture to classicism and particularly Mozart, he not only mentions that composer by name, but he includes a pastiche pastoral play-within-a-play, “The Faithful Shepherdess,” which also includes a fine female duet.

Producing this opera is among the many courageous decisions by General Director and Conductor José Luis Moscovich to extend the repertoire of his audience.  This production offers a delightful experience and everything an attendee of regional opera should expect.  That said, there are certainly pluses and minuses to note.  The secondary principal cast members, too many to mention, uniformly meet or exceed expectations.  Most had appealing and sometimes surprisingly strong voices, and they offered many highlights, as Tchaikovsky spread the wealth around.  The choristers have room for improvement, but they convey the music and the tone well.  Kudos to the large number of women, men, and children for participating in a work with considerable choral content that must be learned by most singers as nonsense syllables.

On the design side, Peter Crompton has established an excellent and efficient scenic formula for West Bay Opera productions that includes multilevel forestage; extensive projections as side walls and backdrops; and a few sticks of movable furniture.  These sets are handsome and make the staging appear complete.  A number of projections are used, but in some instances, they fail to reflect the spaces they are supposed to represent – bedroom and barracks scenes, for instance.  Abra Berman also deserves a nod for capturing an appropriate look and for the sheer volume of costumes required for this production, which alone ornament the stage with a period appearance.  One exception is that the outer tunics of the military outfits lack appropriate decoration or distinction and thus don’t capture the feel of dress uniforms.

As indicated earlier, this is an opera that opera lovers will love.  It is a deserving production that can be thoroughly enjoyed.

“Pique Dame,” composed by Pyotr Illyich Tchaikovsky with libretto by Modest Tchaikovsky, after a novella of the same name by Alexander Pushkin, is produced by West Bay Opera and plays at Lucie Stern Community Center, 1305 Middlefield Road, Palo Alto, CA through May 29, 2022.