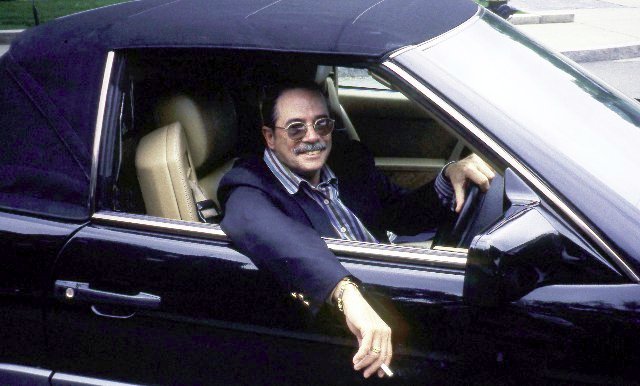 Many now established critics and journalists launched careers working for the colorful and controversial publisher Stephen Mindich. He passed away this week at 74 under hospice care in Newton where he resided.

A theatre major at Boston University he was attending graduate school when he tried his hand at writing reviews for WBUR and  a four page entertainment tip sheet, Boston After Dark, published by Harvard Business School student, James Lewis.

With money from his wife Betty’s family he invested and became co-publisher. While he continued to write the occasional review his focus was on marketing and sales.

He was among a range of entrepreneurs to recognize the vast potential of youth marketing in Boston. Because of the many colleges and universities in the city students, while transient and non voters,  represent a disproportional demographic of Boston’s population.

With a focus on entertainment Boston After Dark represented the next generation of publishing after the demise of the radical “Underground Press” in the late 1960s. Mindich/ Lewis initially attempted to distance their weekly tabloid from the social and political turmoil of the era. The term “Alternative Weekly” was promoted.

After a war with the Mel Lyman, Fort Hill cult, in the summer of 1968 the team of David Wilson and Sandi Mandeville of the music publication, Broadside, took over The Avatar. I had been a part of the dissident group which published the independent Issue # 25 which was such a threat to the Lyman gang that they confiscated the papers and sold them for scrap.

In the fall when Wilson felt that we had accomplished our goal he abandoned Avatar and went back to Broadside which merged with Free Press. I was hired by Arnie Reisman, my former editor at the Brandeis Justice, and then editor of Boston After Dark. My job as design director didn’t last long but I stayed on as the art critic.

The staff walked out in support of Mindich when he went to court in a struggle with Lewis. For a time, Mindich and Reisman published Public Occurrences named for a newspaper from Boston’s Colonial period.

When Mindich prevailed the paper solidified and took on political coverage for which it was widely respected. It put real pressure on the paper of record, The Boston Globe, and then steadily declining Boston Herald Traveler. That once dominant Republican broad sheet was bought by the Heart organization’s Record American. It has changed hands several times since then and is now a shadow The Herald. The Globe was sold to the New York Times corporation.

There has been a demise of print and youth based media across the board in recent years.

In 1972, after he solidified control of Boston After Dark, Mindich paid a hefty sum to acquire a competitor, The Cambridge Phoenix. It is said that all he got for the investment was a name and sports writer George Kimball. Mindich renamed his paper The Boston Phoenix. It had more cachet than Boston After Dark or BAD. To get around postal regulations he created a paper for sale and one for free distribution on campuses. They had to be some 20% different. The combined circulation was some 200,000.

While described as a “hip capitalist” he was just 5’ 5” but perceived as a giant in the field. At the height of his expansion he presided over The Boston Phoenix and alternative papers in Providence, Worcester, and Portland, Maine, along with alternative rock station WFNX-FM, and later the publications Stuff and Stuff at Nite.

Having all those satellite ventures meant expansion and eventual financial drain on resources. For the editorial staff, political and arts writers, Mindich consistently recruited the best and the brightest. For sales and administration he had Barry Morris who many described as even more focused and aggressive than the publisher.

When Mindich bought, and seemingly spiked the Cambridge Phoenix, the staff regrouped and with Paul Solman as its editor became The Real Paper. For a time it prospered and ran neck-and -neck with circulation and superb editorial content but folded in 1982.

Having earned the right to ease into retirement Mindich passed the corporation to his son Brad. When it ceased operations in 2013 those who knew and spoke with him described him as more pissed than sad. Media was changing and his heir appeared to lack the skill set and drive to refocus. The market was deeply impacted by social media and more immediate ways of receiving and sharing news and entertainment information. Allegedly he said  "I handed off a nice baby to another baby who walked away and went skiing."

In 2009, WBCN-FM, ceased to broadcast. Until then it was “The Rock of Boston” and one the nation’s foremost and most influential alternative rock stations. It continued in another format. WBCN Free Form Rock was dropped by CBS in 2016 and deleted the Facebook page for it.

For several years I have been conducting interviews focused on counter culture, arts and media of Boston primarily late 1960s through the early 1980s. As a part of that research we spoke with former Cambridge Phoenix editor, Harper Barnes, as well as his rival and friend editor Reisman.

There is some irony and poignancy that I was thinking and talking a lot about Stephen recently. I knew him well but wouldn’t say that we were close. That follows the norm for writers and publishers. It was surprising when Arnie spoke of him with humor and respect.

“My relationship with Steve was love/ hate but it was much more love than hate. He was a hip capitalist and pleased as punch to be selling full page ads to Sack Theatres and Jordan Marsh. He was trying to prove that he had entrepreneurial skills and he also had the savvy to know that there couldn't be 25 to 40 Steve Mindiches. He had to have me, and you, and everyone else who had a different way of communicating. We could reach people he was trying to reach better than he could do. Except for his occasional theatre review because that was his passion. He was never going to be the theater editor nor did he want to be…” Reisman said.

He recalled being approached by Jeff  Tartar  who attempted to recruit him as founding editor of The Cambridge Phoenix. “Mindich was building something and this didn't look the same. Mindich started poor and he had something to prove. It was summer of '69 and a lot was going on including Woodstock. I told Mindich and said this is what's coming to town. I watched the blood drain out of him. This was going to be competition. He asked what are they going to do? I said well 'A, they're going to cover Cambridge. They will be an entity for awhile. I know Jeff and he's going to hire people. He was interested in the idea of combining news (politics) and entertainment.'

"My line to Mindich was 'Let's do a Village Voice in Boston.' Steve wanted to do it. But Jim Lewis, who started the whole thing and hired Steve to be advertising director before they became partners said 'Over my dead body. I see where the future is and it's not in news. I don't want to go that way.'

That happened as Reisman relates amusingly. I wanted to know why Reisman had a different and more compassionate memory of working with Mindich? By way of illustration he offered an anecdote."This says a lot about Steve.' He said. 'It was the spring of 1971. In the office we got wind that Stop and Shop was pulling a fraud on consumers. This was the height of Cesar Chavez and produce strikes in California. We were told that there's a phony union label on all the lettuce heads at Stop and Shop. They're slapped on in Cambridge.

“Paul Solman had an idea. 'This may backfire but I want to send Jane Goldberg.' She was our listing editor. He said that she had an innocent manner and that people trust and unload on her. 'Send her' he said 'See what happens. If it doesn't work, it doesn't work.'

“After hours and hours she comes back. She said 'You're right and the produce manager admitted it.' (laughing) 'He showed me where they slap the labels on.'

“She wrote a huge story. I got the art department to create a graphic which was a head of lettuce with an ax going through it and blood pouring out.

“I went to Mindich and said 'Here's your front page.' At the time Stop and Shop was running like $25,000 worth of ads.

“Steve said 'You've got to be kidding me. We're not doing this, are you? You really can't do this.'

"How did she get this story' he asked? 'Did she tell him she was a reporter?'  (laughing)

“We called in Jane to talk with Steve. She said 'I think I told him.' We're saying don't tell him that and Paul is saying you must have told him.

“She said 'I was taking notes.'

“So we said he must have seen her taking notes. Oh good. A notebook and a pencil. Good.

“This is going on and all of a sudden Steve said to me 'You can't do it. Build another front page. You can't do it.' This was just before dinner time.

“He went off and wrestled with it and around midnight he came to me and said 'Ok, run it. I've been doing a lot of thinking and decided where I have to come down. Otherwise, I'm a total hypocrite. I'm coming down on what's morally correct here. You guys discovered a story that they're using fraudulent labels and I can't sit on that. If I loose the damned account then that's just the way it is.'

“We ran it. The next day all hell broke loose at Stop and Shop. The produce manager was fired. It was a big story at the time. The Globe was calling asking how we got the story. We told them to do their own work and hung up on them. It wasn't Winship this time.

“The PR person, Bernard Solomon, known affectionately as "Bunny" called Steve the next day. He said 'Well, you got us. We're sorry it happened. We shouldn't do this and are going to make amends.'

“He was big about the whole thing and saw it as a public relations fiasco. They had inadvertently walked into it and they never pulled their ads. Steve was ecstatic and ran into my office and kissed me.

“Whatever you might say about him he came around on this and I'll never forget him for this.”

Like Reisman and myself there were a number of Brandeis graduates that worked for Mindich and in Boston media. He listed “Paul Solman, Teddy Gross, Ben Gerson, who became music editor after Tim Crouse went to Rolling Stone. Gerson and Gross were class of 1969. In my class (1964). I'm a year behind you. Teddy had a brother Larry Gross who taught at Penn. Solman was class of 1966. Jon Landau was class of 1968. It was just people I knew who were writers and wanted to do this thing. It just happened. I walked in and inherited an established staff. There was Deac Rossell in film. Larry Stark covered theatre…”

For all of these writers, as well as scores not mentioned, there are countless anecdotes and memories of  Stephen Mindich. He touched the lives and careers of many of us but nobody is likely to say that it was always copasetic.

Link to interview with Arnie Reisman.

Link to interview with Harper Barnes.