The Belle of Amherst

A Remount by Palm Beach Dramaworks 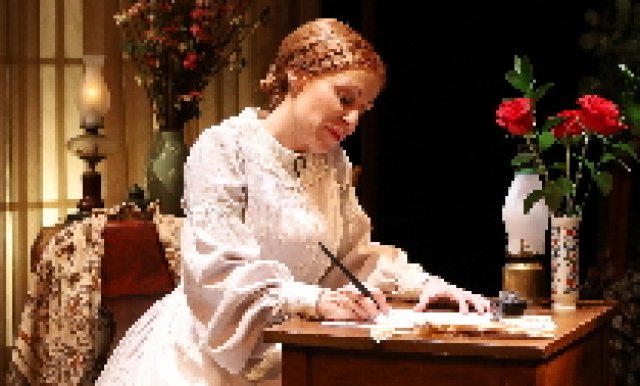 Margery Lowe appears in a scene from ‘The Belle of Amherst.’ 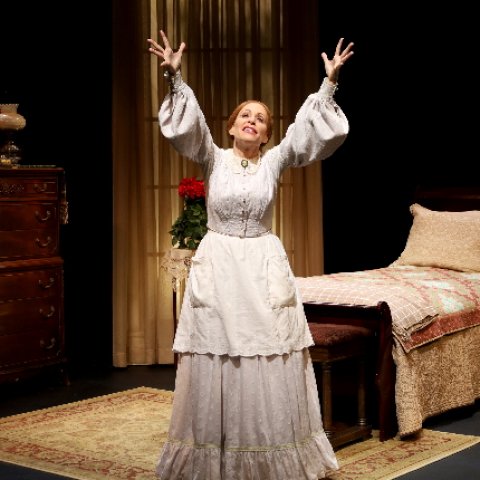 Margery Lowe appears in a scene from ‘The Belle of Amherst.’

While looking at them through wide, radiant brown eyes, Emily Dickinson extends the black cake to her guests. This time, no screen separates the famed poetess from her visitors. Would they like the recipe, she asks. In fact, several times during the visit, Dickinson eyes one or more of her guests while speaking.

The joy and energy of intimate, live, in-person theater is infectious during Palm Beach Dramaworks’ (PBD) revival of its 2021 co-production of The Belle of Amherst with Actors’ Playhouse at the Miracle Theatre in Coral Gables. This year, PBD is the only producing theater company. The West Palm Beach company’s remounting runs through June 5 in PBD’s 218-seat theater.

Last year, PBD and Actors’ Playhouse offered audiences a taped production of The Belle of Amhest, a one-performer show about Dickinson’s life. At the time, theater companies felt it was safer, given the state of the pandemic, to keep artists and audiences separated. But now, actors and audiences are once again in the same room at the same time.

Award-winning actor Margery Lowe has said that she could not wait to perform for audiences, live, and in person, as Dickinson (1830-1886) in The Belle of Amherst by William Luce. And that excitement was evident during a recent performance. You could not only see, but sense Dickinson’s energy and enthusiasm as she spoke to audience members. They play visitors to the poetess’s home in Amherst, Mass. In The Belle of Amherst, the visitors have arrived at her home for a reason. The exact purpose for the visit is something for audiences to ponder.

The play’s title stems from a letter that Dickinson penned when she was 14. “I am growing handsome very fast indeed!” she wrote. “I expect I shall be the belle of Amherst when I reach my 17th year.”

Luce’s play, and PBD’s production, shatter the image of Dickinson as a recluse. Rather, it presents the poetess as a lively, playful, even mischievous person. One might wonder why she chose to stay at home. Lowe said during an interview with me that, during Dickinson’s time, society tended to frown on women such as herself, who were ahead of their time and never married. And, so, Dickinson chose not to go out in public.

But she welcomes, literally with open arms, her guests into her home in The Belle of Amherst.

“Every one of you is, to me, a poem,” Dickinson tells her guests. Since all are in the same room this time, you not only hear but more keenly sense the sincere devotion escaping her lips.

The vibrancy that Lowe brought to Dickinson last year is also more vivid this time.

Director William Hayes ensures that Lowe is never standing in one place for too long, becoming essentially a talking head. Rather, he has her moving about the stage, gesturing, and performing tasks. All of this enhances the spontaneity and naturalness of Lowe’s tour-de-force performance.

Hayes and Lowe have worked together on productions for more than 15 years. Certainly, such familiarity translates to success.

It is impossible not to fall in love with Lowe’s Dickinson. You want to embrace her as much as she probably wants to embrace you.

Speaking of embracing, more than once, this smiling, charming “Belle” spreads her arms as wide as she can. It is as though she is about to wrap life in a bear hug. And Lowe, a radiant red-headed, brown-eyed performer, believably conveys a zest for life.

Still, Dickinson accepts that she will die. In fact, dreamily, she talks in the play about her final arrangements.

When the play opens, Dickinson is 53. It is three years before her death at age 56. However, judging from her youthful verve, the pep in her step, and her playfulness, we might mistaken her for a Belle in her late teens or 20’s. Actually, the play shifts between time periods. However, Luce and Hayes ensure that we can easily follow the action.

Dickinson takes us into her world. In particular, we learn about her neighborhood, her love of nature, her school days, her courting days, her struggles with religion, her attempts to publish her poems, her views about life and death, and her family.

Portraying Dickinson, as Luce wrote her, is not easy. For one thing, the performer is onstage throughout the play’s roughly two-and-a-quarter hours (there is one 15-minute intermission). Further, the actor must credibly convey qualities, feelings, and emotions such as charm, warmth, mischievousness, nostalgia, sorrow, youthfulness, maturity, eagerness, assertiveness, nervousness, joy and wonder. Sometimes, the script calls for the performer to segue quickly and seamlessly from one to another.

In all this, Lowe succeeds masterfully.

Dickinson, sporting an appealing full-length white period dress with an apron over it (Brian O’Keefe designed it) warmly invites us into her world.

And this time, we feel as though we are really in Dickinson’s world, not merely watching it.

Palm Beach Dramaworks’ re-mounting of its 2021 co-production of The Belle of Amherst runs through June 5 in the company’s intimate theater space. PBD is located at 201 Clematis St. in downtown West Palm Beach. To buy tickets, go to https://tickets.palmbeachdramaworks.org/TheatreManager/1/login?event=407.