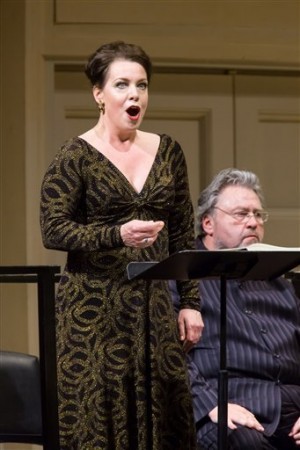 Nina Stemme, one of the world’s great singers. 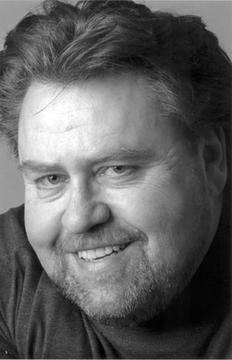 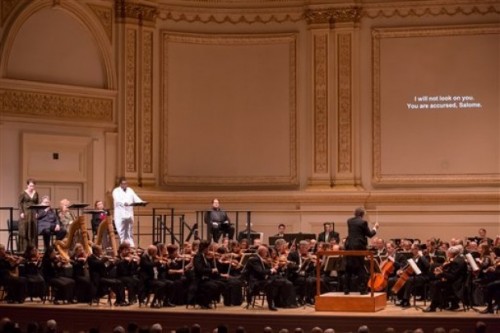 The principal singers and the Cleveland Symphony Orchestra.

The Cleveland Symphony conducted by Franz Welser-Most, brought a concert performance of Salome to Carnegie Hall.  Welser-Most has led six opera-in-concert performances in Cleveland and also mounted three fully staged operas from Zurich.  From the start the orchestra demonstrated its skill in this unique musical form.  The score was played sumptuously, at times celestial and at others base.  Strauss' complex and suggestive orchestrations were carefully articulated in an extraordinary evening.

Topping off the great Strauss opera channeled through Oscar Wilde was Nina Stemme, diva among divas.  When Stemme sang Brunhilde in the San Francisco Ring last season, Donald Runnicles, who conducted, announced that she was one of the great Brunnhildes in the history of opera.  He is right.  Although she started her career singing Mimi in Boheme, she is now hitting her stride in Wagner and Strauss.  Next spring she will sing Isolde in Houston.

Having heard her  three seasons ago in Adriane auf Naxos, her performance did not surprise.  How did the Met miss her in casting the Ring cycle?  Her excellence so surpasses most of her contemporaries that it is hard to describe. In addition to a lush, big voice, she tends to all her tones, and matches them as carefully as Strauss did Salome's and the drama's.

Dressed in a low cut black and gold dress, Stemme looked every inch the star she is.  Yet the detailed attention she pays to her job, an opera singer to whose voice exceptionally beautiful music has been entrusted, is delightfully modest.

Strauss described the Salome role as “a sixteen year old Isolde.”   The soprano hired for the premier said, “One or the other.  Not both.”   No one who is 16 could sing the role.  Stemme did convey an insouciance and playfulness that seemed youthful.  Certainly Salome's impetuous decisions and insistence that the prophet kiss her dead or alive seems like someone you might find overactive on Twitter.  Strauss had written his parents that Salome was a cautionary for parents of teens.

The Kaiser in Berlin was leery about the subject, but since he had suggested Herod to Strauss, he was pacified when a Star of Bethelem flickered on the backdrop at the opera’s Berlin premier.

Preparing for the premier, Strauss told the orchestra they should play in the style of Mendelssohn’s fairy music.  “This opera is a scherzo with a fatal conclusion.”  Welser-Most captured the incredible lightness and delicacy of the score, as well as its grandeur.  Sometimes too grand for the singers, but Welser-Most may have been following Strauss’ instruction to players:  If you can hear the singers, the orchestra is not loud enough.

Eric Owens was Jokanaan, the prophet.  The role was written for baritone, and lay a bit high for the Owens’ voice, but his great bass baritone deserves all the praise it gets.  We could imagine him in a dirty cistern as he sang off stage.  When he emerged to mount the raised platform from which the singers performed, Herod was scared to death and Salome fatally attracted to this pure, wild man.

Strauss provided Salome with musical lines which help to understand that she is not just crossing her stepfather for the fun of it, but intricately and passionately drawn to Jokanaan. She’s not walking lockstep with her Mom either, although the prophet paints a harsh portrait of Mom, the whore.

Rudolf Schasching as Herod was spectacular.  Not only did he sing and spit his role to perfection, but he acted like a conflicted governor of Galillee.  Schasching has grown in stature as a regular at the Zurich Opera House.  He gave Stemme many opportunities to tease, defy, wrangle and dare, showing us, as foolish as this course might be, she could take on Herod her stepfather.  Of course, Salome gets it in the end.

Jane Henschel as Herodias, and Garrett Sorenson as the Syrian guard Narraboth were both excellent, as was the entire supporting case.  Bickering between the Jews, soldiers and a Capadocian were handled with brisk tonal changes from both the singers and the orchestra.

When Strauss played the score for his father, the elder Straus remarked, “What nervous music.  Like having a cockchafer crawling in your trousers.”  No doubt Wilde was enjoying the perverse, provocative Biblical story. Strauss embraced its outrage. In all the roles the singers were working together and with the orchestra, matching the tone of the score.

Salome at Carnegie was a high point of the New York opera season.  Carnegie delivers again, in presenting orchestras from all over this country and giving them a chance to perform in this superb venue.