Traveling the World in Two or so Hours 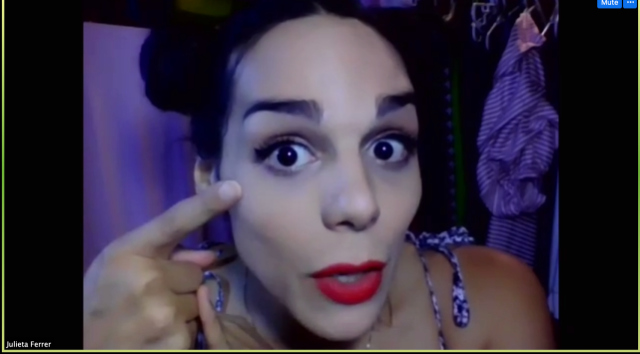 Photo by PopUp Theatrics June Romero awaits you in Miami. 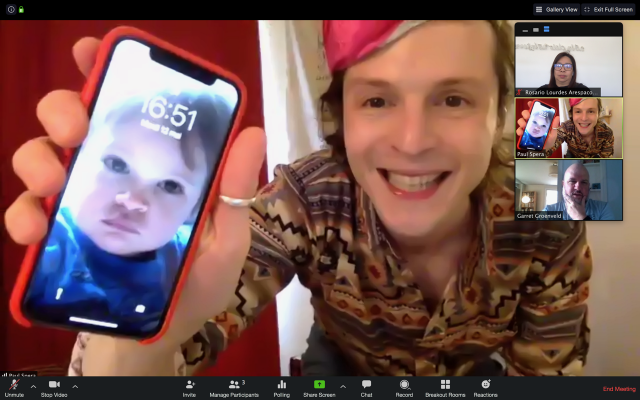 Photo by PopUp Theatrics Party with Paul Spera in Paris. 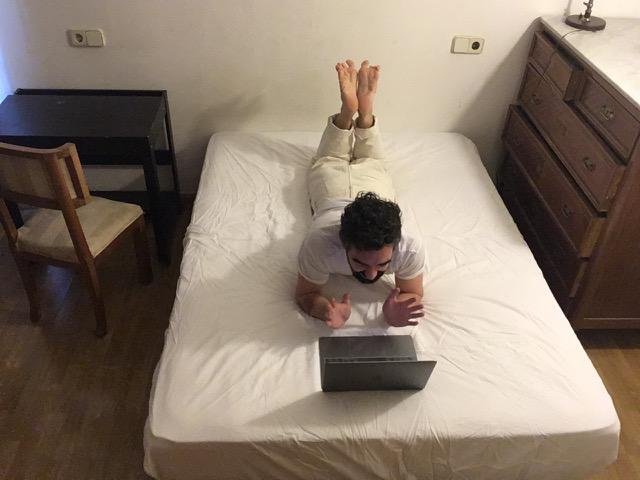 Photo by PopUP Theatrics Angel Peraba will welcome you to his Madrid home.

In a matter of hours, you can laugh in Miami, sing “Happy Birthday” in Paris, and kick some butt in Singapore.

To zoom from one destination to another, you don’t need a passport, a suitcase full of necessities, or worries that you’ll catch COVID-19.

You might say the adventure sounds impossible. But Tamilla Woodard guarantees that it’s doable. After all, she’s been sending passengers off to such journeys for about a decade.

Woodard is not a travel agent. Instead, she is a co-founder of PopUP Theatrics. The company’s goal is to “create immersive, site-specific, site-impacting theatrical events in dynamic collaborations with artists world-wide,” according to its Facebook page.

One such event is Long Distance Affair, running through Saturday, May 30. It’s a web-based virtual and personal adventure that allows you to experience Madrid, Singapore, Paris, London, New York, and Miami without leaving your home. You can either “travel” solo to one or more places, or go with strangers who might later become your friends. You can “travel” to one city, three or all six. And the entire program is in English.

Thanks to Zoom, and a collaboration between New York-based PopUP Theatrics and Miami-based Juggerknot Theatre Company, someone’s dream vacation might become a reality. And no, you don’t need to maintain social distancing during your adventure. In fact, the folks at PopUP Theatrics and the-also-experimental Juggerknot Theatre Company encourage people to get up close and become fully immersed in the experience.

In reality, “audiences” are not just spectators when it comes to Long Distance Affair. Instead, Woodard refers to the project as a combination of immersive theater and participatory theater. One not only becomes immersed in the experience, but participates. By the end, audiences might develop an intimate connection with a total stranger (actually a performer) in perhaps a strange city.

“We’re asking (audiences) to engage in something in a way that they’ve never engaged (in a theater),” Woodard said. She added that a person’s reactions could change the course of the afternoon or evening. However, she emphasizes that the writers of the six roughly 10-minute plays have crafted them in such a way that travelers won’t feel pressured to participate. The performers are trained to improvise accordingly without singling anyone out.

Speaking of the actors, they live in one of the six aforementioned cities. Your experience might take place in their apartment, or, through an even more intimate encounter, a specific room. Like the actors, audience members play various roles. They include family members of a birthday celebrant and students in a self-defense class, offered to help them fight back against bullies.

“Someone across the globe is reaching out just for you,” reads a synopsis on popuptheatrics.com. “What will be the result when you and a perfect stranger meet with only a computer screen between you?”

But before that, what should you expect when you’re ready for your adventure? First, you can buy tickets and choose your destination or destinations at https://ci.ovationtix.com/35278/store/packages. Then, you will receive a Zoom link with instructions. All participants will meet in a virtual lobby, where conductors will give a briefing. Further, the conductors will ask all participants to turn on their video through their cell phone or computer and ensure that their machine’s microphone is working. Following that, you will zoom to the city or cities of your choice. Each person’s experience will be different, depending on how much he or she wishes to participate, Woodard said.

In about a decade, PopUP Theatrics has produced Long Distance Affair six times, Woodard said. Challenges have included those posed by technology and working across multiple time zones. For example, a project collaborator in San Francisco might need to be ready for rehearsal at 6 a.m. Pacific Standard Time to accommodate a fellow collaborator in Paris, which is nine hours ahead of San Francisco.

Since the pandemic, writers have tried to make content more humorous, Woodard said. At the same time, a “tinge of loneliness” surrounds the characters. Of the six short plays, four are brand new, written specifically for the pandemic. Meanwhile, the two other pieces are revivals, receiving remounts due to popularity.

Long Distance Affair has proven popular with the press. Former “Miami Herald” theater critic Christine Dolen, writing for “Artsburst Miami,” called Long Distance Affair “a master class of its own as it mines the possibilities of making artists and audiences forget there is a screen (and hundreds of thousands of miles) separating them.”  Also, “CultureViewMIA’s” Jordan Levin called the theatrical experience “captivatingly original,” “emotionally transporting” and “giddily unnerving.”

Woodard said Long Distance Affair is not an attempt to create a substitute for traditional live theater. Rather, “this is one more wonderful way to tell a story.”

At least one audience member praised the series of short plays on Juggerknot’s Facebook page. “Wonderful shows!,” she wrote. “Paris was so touching.”

The Miami-based Juggerknot Theater Company, founded in 1998, “continues to push the boundaries and expectations of its audience by delivering alternative, experimental, and non-traditional theater works to audiences,” according to its Facebook page. One of Juggerknot’s more well-known and critically-acclaimed theatrical pieces is Miami Motel Stories, “a real-time immersive theater experience that takes place inside hotel/motel spaces within developing neighborhoods.”

But you won’t need to book a hotel or motel room for Long Distance Affair. Simply make a reservation at https://ci.ovationtix.com/35278/store/packages.  It could be just your ticket to a worry-free, entertaining, and even stimulating summer vacation.