Launches Barrington Season in Theatre Named for Him 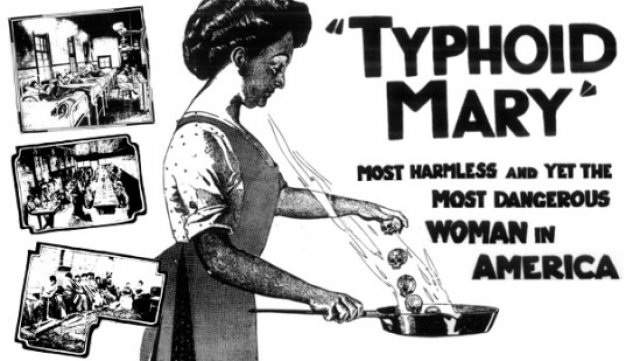 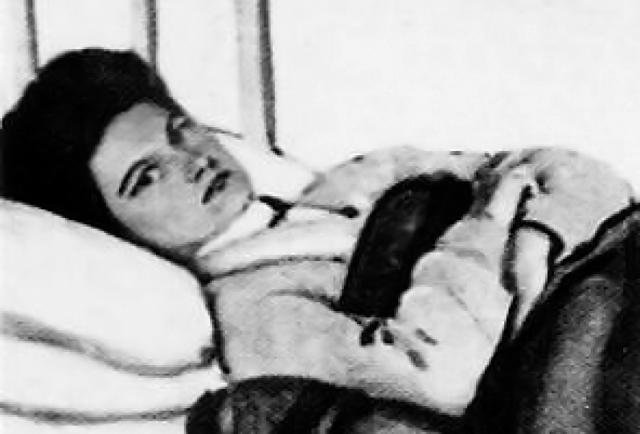 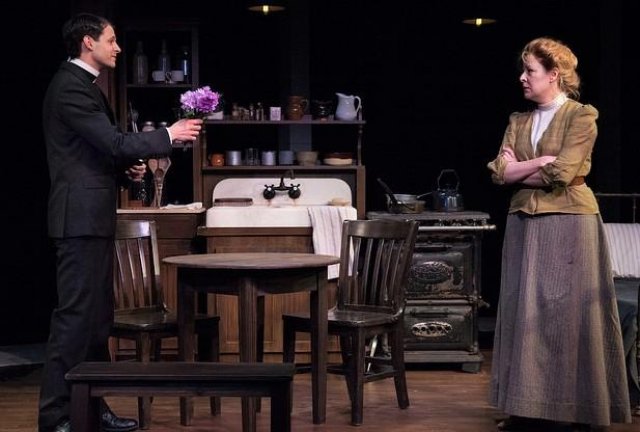 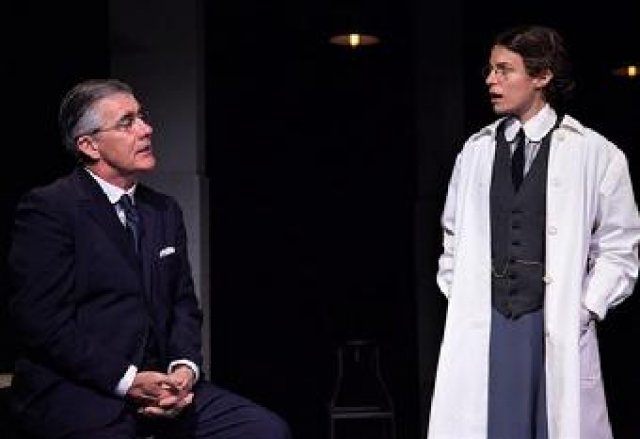 The doctors have more than professional differences.

The sobriquet Typhoid Mary has endured as the concept of an individual who willfully or by fate is the source of spreading an epidemic.

In a compelling play by Mark St. Germain, in a theatre that bears his name, the sordid tale of the real Typhoid Mary, Mary Mallon (1869-1938), played with conviction by Tasha Lawrence, unfolds in two acts with a running time of some 90 minutes.

This is a revival of a 1991 play that has been tweaked by the playwright. Staging it again is a commentary on anti-science, fundamentalism and ignorance that pervades our socially and politically divided nation. Like the protagonist, who had no truck with science, medicine and its gibberish, parents refuse to inoculate their children with vaccines. In some cases they have all but eliminated devastating diseases. Such reactionary ignorance evokes key cabinet positions in the current federal government.

A young woman married to an older man Mary was pregnant when they sailed on one of the Black Ships bound from Ireland to opportunities in a New World. Like a generation that endured rough passages they weathered the voyage on deck. When typhoid broke out the inflicted were confined below deck.

There Mary gave birth and the infant soon perished of the disease. Her husband dropped its corpse over the side effectively terminating their marriage. She was an asymptomatic carrier of the pathogen associated with typhoid fever. Mallon was presumed to have infected 51 people, three of whom died, over the course of her career as a cook.

The simple, functional set by Brian Prather conveys the kitchen where she earns a living as well as servant’s quarters next to it. It also indicates the room to which she is quarantined in a small cottage on North Brother Island, a property of Riverside Hospital.

Life had been hard on Mary and turned her heart and soul as black as the grim ships that transported dirt poor peasants to America. In confinement she is treated with faith by a young priest Father Michael McKuen (Miles D. Jackson). The science of medicine and epidemiology is enforced by hospital administrator, Dr. William Mills (Kevin O’Rourke), and the young woman Dr. Ann Saltzer (Keri Safran).

Mallon sued the state for her release. Attorney fees were paid for by William Randolph Hearst who published sensational stories about her cause in his tabloid press. It is revealed that the young female doctor undermined her superior petitioning the court to prevent the public health menace of her release.

For this she was dismissed with harsh words from Dr. Mills about the consequences of bad judgment in hiring a woman doctor. That sexism made me think of my mother a generation later as an intern at Harbor Hospital on Coney Island. Like Dr. Saltzer, Mom spent a summer in a VD clinic giving mercury injections that retarded but did not cure syphilis. One wonders how many of her patients knowingly infected their sexual partners.

More than agnostic, the feisty, independent Mary scoffs and resists any restrictions placed on her. She will feign cooperation to be released and pursue her deadly career as a cook.

In a manner which we have come to expect of historical plays by St. Germain we learn a lot about the disease, its devastation, and efforts to cure and contain it.

In the hospital Mary is told to wash her hands. Handling, cooking and serving food conveys germs that infect those she feeds. This ranged from private families to restaurants and institutions. The result is always the same and Mary moves on to another employer as soon as her victims develop symptoms.

When instructed in the proper manner of washing by Dr. Saltzer she is furiously defiant. During intermission many washed their hands far more thoroughly than usual. There were many humorous comments about that during an evening of theatre with little levity.

The first act, as directed by Matthew Penn, was subdued and somber as we were introduced to a particularly unsympathetic character and the horrific impact of her unsavory persona.

Her relationship to the child Sarah, played with remarkable skill and nuance by Frances Evans, softens our harsh judgment of Mary. There is a wonderful intimacy to their time together even as she develops symptoms of the disease that kills her. Part of her brutal defiance of scientific evidence is denial that her disease caused the death of her baby and a child she loved.

Interactions in the second act quicken the pace and draw us into the impact and back story of those charged with, if not curing her, eliminating her potential as a carrier. We learn that was achieved by a combination of sanitation, and massive injections of live bacteria accompanied by pills. The body of the carrier resists the new bacteria creating antibodies. With other medication treatment allows those inflicted to return to society. The regimen normally takes a couple of years.

While pretending to play along Mary will have none of Bible study and the cure. Having received her first massive injection, when Dr. Saltzer leaves, we see her emphatically spit out the accompanying pill.

As a docu-drama there is a focus on how the contrarian character of Mary impacts and morphs those charged to treat her.

The stiff administrator Dr. Mills, with limited resources, just wants to clear a bed through an unwarranted early discharge. He is fought on this by Dr. Saltzer who sees little or no progress from her patient. We learn of her own loss as an orphan and moral dilemma about possibly euthanizing Mary for the greater good of saving others.

The efforts of the priest push him to despair causing him to leave the church, marry and have a much loved child. Depending upon your view of faith and the church this may be a positive development.

The conditions of her release required that she return for regular testing and, if need be, further treatment. This approach was successful in most instances.

Mary, however, based on historical fact, refused to comply. She was responsible for spreading the disease. Eventually, she was apprehended and returned to the Island where she survived for some 20 years.

In enduring infamy her name is a signifier for a pariah. The food that Typhoid Mary served was prepared with a recipe for disaster.