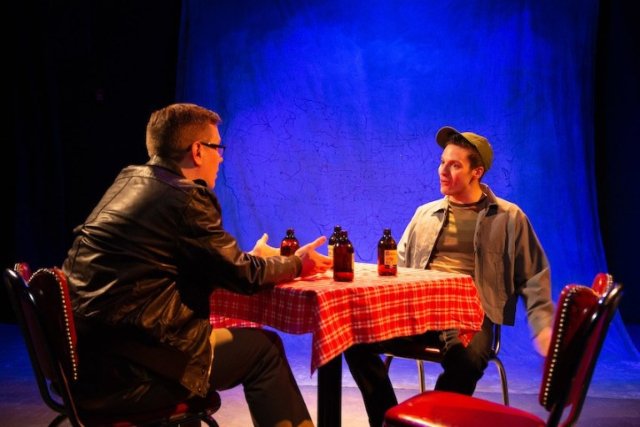 King and Vizzi as Danny and Rich. Photo by Tom McGrath.

We never actually meet Jack and Neal. They’re just off stage, just around the bend, at a booth in the corner of the bar. But the spirit and poetry of Jack Kerouac and his pal, Neal Cassady, permeate the Steven Dietz play, Mad Beat Hip & Gone, now being staged by Promethean Theatre at the Edge Off Broadway. There’s even a hint of the presence of a poet named Allen.

It’s an emotional and nostalgic story that blends family ties and a search for meaning in the mid-century Midwest. Two young men—18 years old and yearning to escape from Kimball, Nebraska—are chasing, searching for …. something. For jazz and kicks, for what they see as an authentic life, for their dead or missing parents, or for a girl named Honey.

The play, directed by Jess Hutchinson, is one of those romance-of-the-road stories, a genre of American pop culture. So it’s entirely appropriate that by the end of the play—11 years after its beginning—Rich (Michael Vizzi) sends Danny (Pat King) a copy of a new book by the elusive writer they trailed across the west.

Rich and Danny, “graduates of the Kimball High School class of 1947,” are hanging out one night in nearby Cheyenne, possibly looking for adventure but certainly for girls—“those girls with the ribbons – those dark red ribbons in their hair.” Danny is taken with Juanita, the beautiful bartender, who at first pays attention to him but now focuses on the guy at the end of the bar, who is writing in a notebook.

Both Danny and Rich have lost a parent. Rich’s mother is dead; Danny’s father is gone, considered a war hero who died for his country. But Albert, Danny’s father (Ted Hoerl), appears, as a ghost or reality, from behind the MobilGas pump at side stage. He came back from the war and never readjusted to civilian life working at his service station. He begins the paean to the road like this: “the railroads made this country a nation. But the car … was a little house a man could take along with him…. And with a little bit of the magic elixir they named ‘gasoline,’ a car turns into the most perfect room yet invented. Small and cozy. With a chair and a window and a place to put your feet. And best of all: the view outside that window is always changin’.”

It turns it that Albert can’t resist that changing view and so he leaves his wife and young son behind and heads for the road.

Rich and Danny decide to take to the road too and follow the Beat poets (and the girl named Honey) west. Honey (Hilary Williams) is searching too. Her mother left Fort Wayne, Indiana, and headed west. She made it to the middle of the Golden Gate Bridge and was never heard from again. Honey hopes to learn where she is, what happened to her.

“Do you think I can find her?” Honey asks Albert when she stops for directions, carrying a gypsy-style bag with a few belongings and her prize Lester Young record. “Oh you’ll find something,” Albert says. “Since as far back as Columbus, this is the country where people find the thing they were not looking for.”

So the searching threads of Rich, Danny and Honey meet and divide and meet again. Honey, having smoked tea, taken bennies and fully adopted Beat-speak*, travels for a while with Jack and Neal after meeting them in a bar. And later, Danny’s mother Penny (a delightful performance by Elaine Carlson), who has a more than motherly affection for Rich, takes to the road too. She borrows a car and sets off to see what all the fuss is about—to learn what this “wanderlust” is.

* We hold the Vast Night and its Tiny Truths to be Vivid and Reactionary – that all Gone Chicks and Mad Cats and Tea-headed Hipsters are Fully Their Own Creation – that they are Self-Endowed by their Own Mercurial Spirit with Endless Inalienable Delights – and that among these are the Bennies … and the Bop … and the Boundless Pilgrimage toward Ecstasy …..”

Finally, 11 years later, holding the copy of On the Road sent to him by Rich, now a success on Wall Street, Daniel says, “There is still no mad magic secret waiting at the end of a ribbon of road…. And there is still no room more perfect … no view more wondrous … than that from an automobile. I no longer own one. It’s been years since I drove one. But my dreams are still nightly of roads.”

You might criticize playwright Steven Dietz for not restraining his urge to write some of his dialogue in Beat-like poetic prose, but his script beautifully captures the spirit of that short period of American pop culture. This is only the second staging of MBH&G and the first since Dietz revised it after its 2013 world premiere in Austin, Texas. It’s a funny, sweet play and director Hutchinson captures that mid-century spirit of searching and rootlessness with this production. The cast of five does an excellent job with the characterizations and the dialogue.

Bec Willett’s set design is sparse and—beyond that vintage Mobil pump—uses only the pieces of furniture and props necessary to carry the scene. A floor-to-ceiling piece of plastic sheeting serves as a projection screen, but I do think that a more aesthetically pleasing backdrop might have been found. Lighting is by Benjamin Carne and sound by Colin Kovarik. Rachel Sypniewski designed the costumes.

Mad Beat Hip & Gone by Promethean Theatre runs about 110 minutes, including an intermission. It continues at the Edge Theater Off Broadway, 1133 W. Catalpa, through June 1. Tickets for performances Thursday-Sunday are $30 with discounts available.