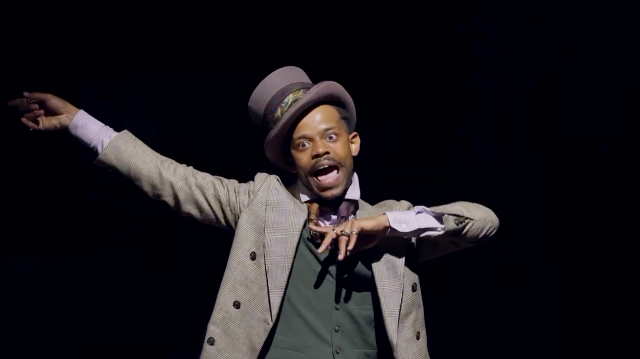 The world of wardrobe fashion and fad changes endlessly.  Consider men’s dress jackets alone – from time to time, the mode has been two-button, three-button, thin lapel, wide lapel, double breasted, Nehru, unstructured, and more.  But in the 21st century, dressing up had already fallen into secular decline, then exacerbated by the pandemic and an accelerated rate of work from home.

Yet, pockets of contrarianism exist.  An exemplar of an atypical commitment to fashion is a self-proclaimed Black Dandy - Michael Wayne Turner III, the Black Mad Hatter.  To him, stylish dress is not only an aesthetic preference but a sociological statement of defiance.

In this one-man show, Turner is surrounded on stage by his own wardrobe.  While he tinkers with his clothing for much of the hour of the performance, the title of the show is still somewhat of a misnomer.  Fashion is clearly central to his personality, and the script reveals his personality.  However, he discusses fashion a bit, but sartorial matters act as a springboard for his storytelling and socio-philosophical thoughts.

And spring he does.  Turner is a veritable whirlwind of motion as he regales the audience with his own words – a series of many vignettes delivered variously as prose, poetry, and hip-hop-like lyrics.  They are an amalgam of social commentaries that he delivers with electrical charge.  His enthusiastic emotionalism and provocative thoughts induce audience involvement in a lively call-and-response atmosphere, often associated with African-American religious services.

The author/performer’s dominant and most emotive theme concerns race, which elicits the most vocal response from the audience.  He begins by asking the question “What do you think?” which deals with the issue of the great racial divide, the prejudice in the perceptions of White people about Blacks.  It prompts the thought, why is it that so many people and societies identify by color of skin.  In a more specific account, about the tragic and lawless practice of lynching, he honors the Billie Holliday popularized song “Strange Fruit” with his own ruminations.

Turner also looks at the macro issue of economics in the piece “What’s wrong with the world?”  He presents the humanist argument that much of the poverty and fault in the world derives from the vast concentration of wealth and resources in the hands of few self-interested individuals.  The imbalances cause fractures in all institutions in society including government, education, and justice.  Of course, these dysfunctions lead to further racial disparities.  At the other extreme, Turner includes personal stories from the very special relationship of a newborn with its mother to the first time he experienced getting beaten up – because of mistaken identity.

On a line-by-line basis, the text of “Hat Matter:…” is dramatic and compelling.  Audiences will find much to cheer and reflect upon.  Some tracts may seem stream of consciousness and disjointed, but overall, the language is colorful and riveting, and the thoughts are profound.